Salman Khan acts dense and dumb by wearing hand-knitted sweaters over shirts buttoned to the hilt. 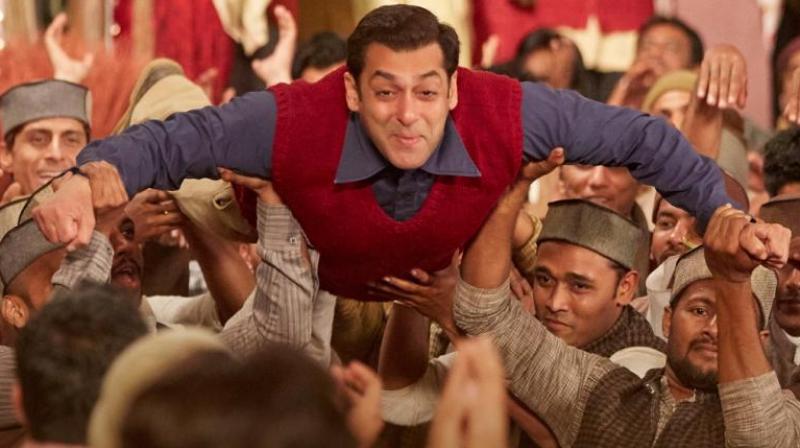 In Bollywood, this Eid is going to be different. It’s going to pass without the almost mandatory, and often monumental, eidi that box-office offers to the Khan khaandan.

Tubelight, true to its name, is a flickering, low-glow batti that comes on intermittently, briefly, only to relapse into annoying flickering again.

Though well intentioned and mild-mannered, Tubelight sets out to tell us a thing or two about slowcoaches and yakeen in oneself, about the idiocy of demanding proof of another’s patriotism, but it ends up either irritating or boring us to sleep.

Unlike Kabir Khan and Salman Khan’s last two outings together — Ek Tha Tiger and Bajrangi Bhaijaan — Tubelight is neither fun nor does it enlighten. It does keep wagging a stubby finger though.

Jagatpur sits on a small flat part of a hill that juts out into the pine-rich air like the terrace of an encroacher.

Lakshman is a simpleton who adores his younger brother, Bharat. Primarily because every time Lakshman was called Tubelight by his schoolmates because he couldn’t put three and four together, and was generally slow on the uptake, Bharat would land a mean punch.

Though they are grown up now, for Bharat Lakshman is Captain, Kaptaan, and to Lakshman, Bharat is Partner, bandhu.

Tubelight begins with Lakshman narrating the rather violent story of India before and after Independence and his encounter with Gandhiji in a childish, cutesy tone.

It’s a wide-eyed, aao-ek-kahani-batata-hoon kind of telling that demands eager and perky ears. The kind that Pogo channel commands.

The film, dedicated to “soldiers who fight their own battles when their loved ones go to war”, really begins when Maj. Rajdeep Tokas comes to Jagatpur to recruit men for the Kumaon Regiment. It’s 1962 and the Chinese are making threatening noises.

Lakshman is rejected but Bharat gets picked up to go to war against the Chinese.

Kabir Khan’s Tubelight likes scenery and so, ever so often, the camera soars to admire the green and lush where Lakshman lives, and the barren and brown where Bharat now dwells. But when if comes down, to capture proceedings on the ground, you wish it had just stayed up there.

Bharat spots a Chini woman, Liling (Zhu Zhu), and a little Chini boy, Guo (Matin Rey Tangu), in their town and what follows is a convoluted, long-drawn lesson about bigotry.

There are moments when it feels like the film will sparkle, because the last time Kabir Khan went political on us, we were bowled over (Bajrangi Bhaijaan). But this time it’s all too pedestrian and not really thought through, as if the film itself is slightly retarded.

For example, by forcing little Guo to talk in Hindi and scream “Bharat Mata ki Jai”, Tubelight legitimises this test of patriotism, this hurdles course to clear before life in one’s own country can be lived without threat or abuse.

Lakshman yearns for his brother and, to keep the quick-to-weep and soft-in-the-head man busy, first a magician appears with a banta bottle, and then Banne Chacha (Om Puri) writes out tasks for him. Soon the idea that yakeen is everything is implanted in Lakshman’s head. So attempts are made to move mountains, bottles, end the war and bring brother home…

I don’t get it? Why waste time and money on a film where Sohail Khan is the robust, normal, daring guy and Salman Khan the darpok dunce? Is it to give Sohail a cinematic salaam? To pass him off as a stud by making Salman whimper, wilt and weep?

If there’s any doubt in the minds of Salim Khan & Sons about which Khan India goes mental trying to see first-day, first-show and then some, they should just go to a theatre today and check out.

In my 200-seater hall on Friday morning, there were barely 20 people.

Given the warped role-reversal, the least the director and Salman could have done was to focus a bit on acting.

Salman Khan acts dense and dumb by wearing hand-knitted sweaters over shirts buttoned to the hilt. He also crying ever so often, slouches and keeps his fly open.

I hardly ever sleep during a film. But sitting through Tubelight without dozing off was a struggle. Even when the magician came on. Given the chemistry the film’s star shares with him in real life, this should have been a crackling scene.

I was so bored that if I could I would have picked up the banta bottle between them and smashed it on their heads.

Tubelight’s basic problem is its screenplay. A) It’s witless. B) A foreign screenplay hasn’t been adapted properly to a desi, Indian setting. C) Too much has been piled on the screenplay, and so even when it manages to rise, it almost immediately dodders under the weight of several critical moral lessons.

Before Tubelight began, and during interval, there were ads about a certain TV channel that gets to premiere all of Salman Khan’s films.

My guess is that it won’t take long for Tubelight to come to your home, so just wait a bit. Go watch G Kutta Se instead. That’s worth your time and money.

This one’s just an energy-sapping, thakela affair where you’ll have to suffer Salman’s brother.

Eid or Diwali, that’s just too much, Bhai.