Hichki is neither maudlin, preachy or peacocky, like, say Taare Zameen Par was. 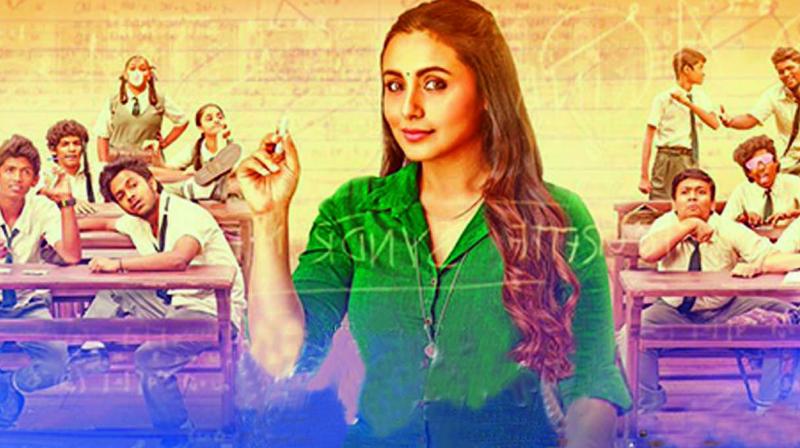 A still from 'Hichki'.
Rating:

Writer-director Sidharth P. Malhotra’s Hichki is not a great film in terms of originality of plot, or even inspired writing, direction. But it’s a very special film for reasons both big and small.

For one, Rani Mukerji, who plays the 15th oddball to join a class of 14 misfits, is in excellent form. Second, Hichki mainstreams and normalises a condition — a mechanical locha, so to speak — in a way I haven’t seen done often. Hichki is neither maudlin, preachy or peacocky, like, say Taare Zameen Par was. It treats the disability it picks as something that needs to be acknowledged, and then focus on the person, not the problem.

Classrooms are not sexy, unless of course Farah Khan is standing at the other end and instructing Sushmita Sen, resplendent in Manish Malhotra chiffons, to pout and preen. They can, however, be transformative.

In cinema, they are natural settings for affecting coming-of-age tales that involve conflict, tears, defeat before the disempowered, unruly lot get empowered. It’s a place where teachers attach little wings and help kids fly. Like epic love stories, there’s a kind of universality to classroom stories. They travel easy, they travel far.

Hichki, a Bollywoodised version of Brad Cohen’s book on which the 2008 film Front of the Class was based, has a lot we’ve seen before. To Sir, With Love, Stand And Deliver, The Class (French and fabulous), Good Will Hunting, Dangerous Minds, and even our own — Hip Hip Hurray, Sir, 3 Idiots…

Apart from some minor tinkering here and there, most films set in classrooms dutifully follow the template immortalised by To Sir, With Love, the 1967 Sidney Poitier classic with performances, songs and an ending that still makes me feel warm and fuzzy even though it’s been years since I last watched it.

Hichki introduces a teacher with a disability in a class of misfits. Hers is not the kind of disability that is quiet and heartbreaking — something that leaps out and forges an instant, melancholic connect, injecting the audience with expected compassion.

Naina Mathur (Rani Mukerji) has Tourette syndrome, and it calls for your attention, repeatedly, with clucking, wrist bumps to the chin, involuntary jerking of the head. And the more people stare at her, the more nervous she gets, and her jitters, shaking gets uncontrollable.

An educated, articulate, at times self-consciously over smart, Naina is always ready with straight replies to FAQs about her condition, signing off with a smile and a pinching remark.

With inspiration from one of her teachers, and the love and support of her mother and brother, Naina learnt this coping mechanism after having to change 12 schools as a student.

And now, as she desperately looks for a teaching job, her father, who checked out of her life long ago, makes special appearances only to aggravate her ticks with patronising suggestions about career choices.

Though an MSc, BEd, he doesn’t think she can stand up in front of a class full of students and teach them given the movements and sounds she makes.

But one school, desperate and unable to cope with a class full of boys and girls from a local basti, offers her a temporary job — an short assignment till they pass out.

Mumbai’s St. Notker’s High School, having to take in kids from the municipal school next door, have dumped them in Class 9F. It’s an irritating, embarrassing nuisance that, thankfully, is the last one they have to deal with.

In this class, one girl carries a chooha in a cage to school, while another is always chopping bhindi. One boy raps, another one takes bets, while one carries little bottles of adhesive that he likes to sniff.

These kids are not cute. They are downright nasty.

They taunt Naina, make fun of her, call her “Hakli” and go to great lengths to force her to give up and leave.

In their bad behaviour, Naina sees their own fears, vulnerability and a sense of despair. They don’t think their lives will change with some textbook learning. And in their elaborate plans to humiliate and insult her, she sees talent, brilliance that can be applied to science, mathematics...

Egging her on with his nasty comments and disdain for her students is Mr Wadia who is proud of leading 9A, a class of the school’s brightest and best. After overt rejection and efforts from the school to invisibilise them, 9F kids have become hardered non-achievers. They know they don’t fit in, so they try to stand out with their worst behaviour.

While nervously jerking her head, making quacking sounds and repeatedly jabbing her wrist on her chin, Naina tries to offer them a chance. Her tough love accompanies creative teaching techniques that others scoff at.

Hichki, which is not just about the kids taking flight, but also about Naina not failing herself, follows the usual trajectory where, at the end, lies school prefectship, a prestigious science competition trophy, and a group hug.

Though populated with characters whose fates are sealed from the beginning — not just of the peripheral ones like Mr Wadia, but even Naina and the students — it’s the talent cast and their performances that bring alive these characters and make the film rather special.

The kids in 9A, but especially the ones in 9F, are all flesh and blood. The film doesn’t try to make them cute. It keeps them real.

But the film belongs to Rani Mukerji, a very fine, very astute actress. With eyes that never stop acting, she expresses a lot with very little.

As Naina, whose sartorial choices are rather peculiar, she internalises the ticks as part of her character throughout.

Even in the emotional, dramatic scenes — ones where you think the director, writer and actor won’t dare to disturb the rhythm, the sanctity of the moment — she quacks and jerks her head, and then boxes her chin.

This is rather brave for Bollywood.

Another very interesting thing that director Sidharth P. Malhotra does is that he doesn’t make us look at Naina’s Tourette. He makes us look at the people who stare at her as she shakes and makes strange sounds.

These are not always judgmental shots, but as they place us on the good side — the one that sees her, and just her condition — it trivialises the problem without underming it.

The credit for this goes to the writers and the director, but also Rani Mukerji.

Not for a second does she let us off, never allowing us to think that it’ll go away. It won’t and it doesn’t. While watching and admiring Rani in Hichki, I kept thinking, “Bollywood ko sharam aani chahiye”.

Bollywood, which is still mourning the shocking passing of Sridevi, should really go and doob-maro in chullu bhar paani.

While their grief is real, of course. It needs to be accompanied with huge amounts of regret, remorse and some serious self-loathing.

The passing of a talented actress like Sridevi should make them pause and look at how they treat them when they are alive.

After having hit that arbitrary set expiry date — which mostly translates to “can’t play sexy eye candy next to our prized heroes”, and usually when actresses either get married, have kids or simply age — Bollywood stops seeing them as humans.

They have no clue what to do with them then. So they lose interest, offering them idiotic behen, bhabhi, mummy roles.

Most actresses decline these, and are reduced to waiting for that annual invite to bestow this award or the other.

It’s up to the determination of some individual, inspired writer, director to think of and find funding for some hatke scripts for them.

So, when a few women in the industry, on their box-office power, spunk and, well, the production house they marry into, demand that scripts be written for them, I do hope a glass ceiling somewhere gets a crack.

But here too I have a grouse.

Sorry to remind you, but do you recall that nonsense called Befikre?

Hichki was apparently made for Rs 20 crore.

This is the kind of inherent sabotaging behaviour that keeps the myth in perpetuity that only films with big stars prancing around in foreign locales work.

It’s a cunningly skewed attitude designed to produce an outcome they have already decided and, perhaps, want.

Spend loads of money on a big movie with a big star, then throw more money on promoting it and bombard theatres with its prints.

But spend very little on a small film, next to nothing to promote it, and then wait for a week after its release to say, “Dekho, chhoti filmein, films without big male stars nahin chaltin.”

This should be a topic of discussion at the Chopra house jismein at least one dinner set needs to be sacrificed. I implore you, Raniji. Nahin toh kuch nahin badlega.