There’s something deep and meaningful between Titu and Sonu and that needed to be explored horizontally. 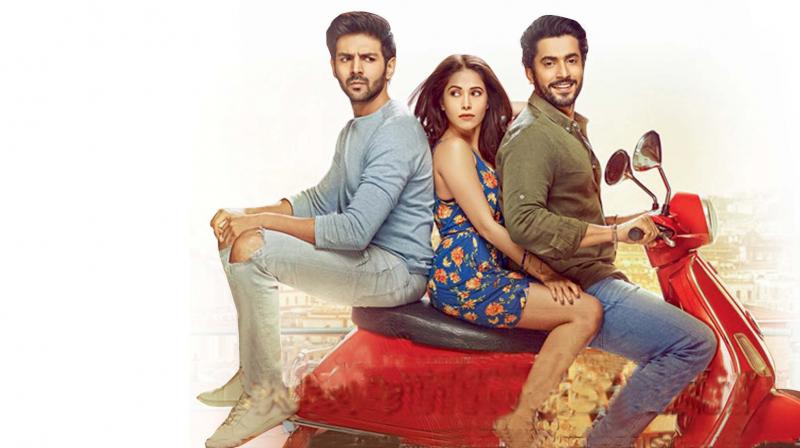 To bolster his arsenal and better his chances at winning the battle of the sexes that he’s needlessly been waging since 2011 (Pyaar Ka Punchnama), director Luv Ranjan has merged Indian cinema’s two female archetypes and given birth to a new character — the alert, infatuated, jealous and itching-for-a-fight BFF, male.

The situation is familiar, the genre is old, but the playmates are new.

The gender war, in his Sonu Ke Titu Ki Sweety (SKTKS) is hinged on the premise that naari is narak ka dwar and all men, by definition simple and honest, must be saved from the chungal of women, by definition manipulative, evil and killjoys. Obviously, only a man can get this job done.

SKTKS’ main target audience, I imagine, is the same lot that puts Salman Khan’s photos on their FB and Twitter pages. Women-chasing, women-hating boys who’ll weep if they were made to wax their chest hair, but will thump that same chest proudly while uttering something deeply misogynistic.

SKTKS, created in the spirit of shaadi is barbaadi for men, will tickle male members with its sexist dialogue, and irritate all girlfriends and wives in the audience.

While I cringed at some of its lines, I also laughed at many of its jokes.

SKTKS pulls off its sexist humour very well, and that’s mostly because the two warring creatures — Sonu, played by Kartik Aaryan, and Sweety, played by Nushrat Bharucha — make a cracking pair. There’s a dance-like fluidity to their kamini harkats and they are both very good.

Watching them fight with such passion, I hoped that Sonu and Sweety must definitely get a room. If not, then Sonu must jump into bed with his BFF Titu.

Set in Delhi and its suburbs, SKTKS opens with Sonu (Kartik Aaryan) abandoning a chaotic work situation to answer an SOS from his weeping BFF, Titu (Sunny Singh).

The conversation that ensues sets up the film.

Sonu, a boy blessed with the power of truth-talking, tells off Titu for letting his girlfriend make an ullu ka pattha of him.

Sonu, you see, has special insight into the mind and manipulations of women. He sees stuff that Sonu doesn’t.

For example, Titu doesn’t really mind that his girlfriend has an active Tinder account. But is wracked with guilt when he is caught checking it — invasion of privacy is paap.

Sonu doesn’t intervene in Titu’s affairs till pani goes sar ke uppar. And when he does, it’s game over.

To save Titu from his own gurgling stupidity, he throws the ultimatum — Pick one. Ya woh, ya main.

Sonu and Titu are bachpan ke best friends who also live together allegedly because of tragedies in Sonu’s family. Sonu is treated as a family member by all Ghasitaaz — Titu’s family of proud and well-known halwais.

It has two older, unmarried, now retired men — Ghasita (Alok Nath) and Lalu (Virendra Saxena) — sit in their veranda on Lazy Boy recliners drinking and smoking, pretending that they control the house.

They don’t. The women do — Titu’s Mummy (Deepika Amin) and Rukmini didi.

Titu craves someone pretty to love and swoon over. So he tells his family that arranged marriage hi kara do. Sonu finds all this shaadi talk worrisome. But he is ignored and a girl is arranged.

Sweety runs an NGO, is honest about her past, always does the right thing while exuding the satvik goodness of haldi-chandan ubtan.

Sonu feels left out and uneasy because Sweety is too good to be true. But Titu, as usual, is besotted. He allows Sweety to take over his life and, by extension, Sonu’s.

A servant materialises and the menu becomes healthy and boring, while the elders are in Sweety’s thrall as she organises Mata ka Jagrata.

Sonu thinks Sweety is a controlling, manipulative chudail out to take over the family and destroy his and Titu’s manhood which lies in dirty T-shirts and making out on the couch. He’s also scared that she is fast becoming the most important person in Titu’s life.

Is Sweety a bitch, is she super smart, or is she just a nice girl out to claim her man for herself?

The film doesn’t say, and we don’t see her do anything wrong.

Yet Sonu is constantly eyeing her with suspicion, and then Sweety throws him a challenge — “Dosti aur ladki mein hamesha ladki hi jeet-ti hai.” What follows is Sonu’s several attempts at trying to discredit her, and Sweety beating him every single time. Till Sonu has no choice but to ask Titu to pick…

Since Pyaar Ka Punchnama, director Luv Ranjan has been waging a war on behalf of simple boys on hot women by cribbing about their bizarre shopping behaviour, incessant texting, need for constant compliments and romance.

He begins with this premise: Ladki = Problems, and proceeds from there, working up the boys to resist all attempts by girls to make them effete.

In SKTKS, however, the married women hold sway over the lives of all the men, and the unmarried ones remain a sweet mystery.

Though the movie, through Sonu, constantly hints that they are gold diggers, we don’t see anything worrying.

But keeping Sweety’s intentions hidden, the film manages to do two things — one, it keeps the outcome unpredictable. We don’t know who will win in the end.

And two, it’s all a lead up to Sonu Ke Titu Ki Sweety 2 which, I suspect, is coming soon, and will hold the real twist.

SKTKS is garish, loud, full of Punjabi bling. It has nice dialoguebaazi though it is, at times, too talkative.

The jokes are funny, well timed and the actors completely in form, rattling off dialogue quick and sharp.

The film’s casting is intelligent, and it was a pleasure to watch Alok Nath chug whiskey and throw some gandi gaalis.

Sunny Singh’s Titu is slow and slightly jhalla, and Nushrat is teekhi and interesting.

The star of the show, however, is Kartik Aaryan. He makes Sonu cheepad, real, endearing and fabulous all at once with his spontaneity and charm.

What’s unfair and wrong is that after so much build-up and a heavy-breathing, teary-eyed bromance, we get to man-on-man action.

There’s something deep and meaningful between Titu and Sonu and that needed to be explored horizontally.

For all his macho talk and woman-bashing, Luv Ranjan was too scared to even explore that. Sad. Effete.