Rangoon movie review: One of the weakest films of Vishal Bhardwaj

If his recent outings are considered, this love triangle set in 1942 is not even close to them. 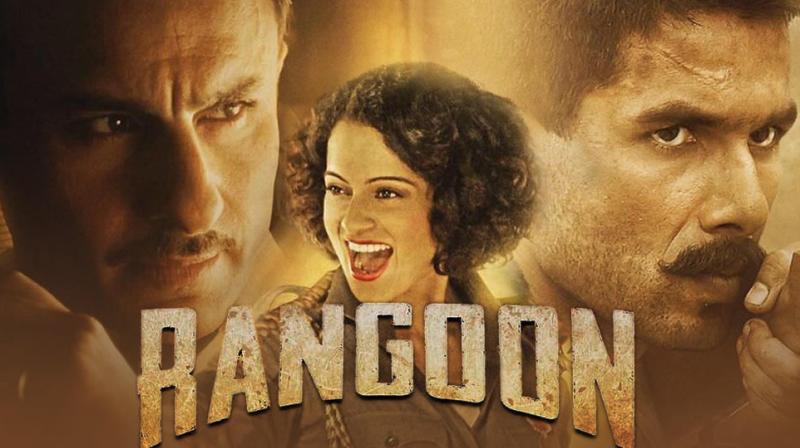 When a film is directed by Vishal Bhardwaj, expectations are bound to happen. He is back on the silver screen with his much anticipated Rangoon which could tickle your patriotic bone up to some extent, but the film is an out and out romantic film set against backdrop of World War II.

Nawab Ali (Shahid Kapoor) serves British Army and accidentally meets superstar Julia (Kangana Ranaut) on his way to Burma. Rusi Billimoria (Saif Ali Khan),  who is the biggest film producer of that time, is madly in love with Julia.

Julia and her assistants get trapped in the attack and Nawab rescues Julia. The two lose the way and reach an isolate village. The two gradually fall in love, but on the other hand, Roosi is in search of Julia. He seeks help from British Army and finds his love Julia back home but it is too late now. Julia gives away her heart to Nawab. Is there a happy ending for Nawab and Julia's brewing love story or Roosi will take revenge of his long lost love? This is what forms Vishal Bharadwaj's Rangoon.

Rangoon is perhaps one of the weakest films of Vishal (not to forget Matru Ki Bijlee Ka Mandola). If his last outings are considered, Rangoon is not even close to them. It is clearly visible that Vishal just wanted to make a love triangle set in 1942. The trailer promised a masterpiece but the entire film will disappoint you. No doubt, Rangoon is one of those Vishal Bharadwaj lookalike films which is engaging and dark but the weak plot of the film is just not expected. We have seen several love stories set against the backdrop of war in the past, Roja, Bombay, 1942 A Love Story among some of the best examples.

Rangoon is acceptable in the contemporary day since Vishal is a master of his craft. From costumes to sets, he won't let you down. Rangoon will surely take you to that era of British rule but the point is that you will keep juggling with the thought that is it a war film or a love story. The awful part of the film is its climax, which is shot in the most melodramatic format as possible for a Bollywood film. Rangoon started off well and in fact, post intermission, there are several hook points to rely upon, but then as the film reaches its climax, it's not convincing enough. The scene where Julia rescues Nawab from the arrest of British Army is not believable. Also in the last scene, where Roosi changes his mind and helps Julia is laughable. VFX in these scenes are horrible.

Over to the actors now. Rangoon will surely be remembered for its performances. Shahid Kapoor is too good in his act of a soldier. Kangana suits the part in her bubbly role of a superstar of that era. Saif Ali Khan steals the show as an arrogant and dominant film producer. All other supporting actors did a fair job too.

Rangoon is definitely not avoidable but it is certainly not a Vishal Bhardwaj masterpiece. Watch the film for its performances and if you come to know whether it is a war film or a love story, then please post your comments in the section below.