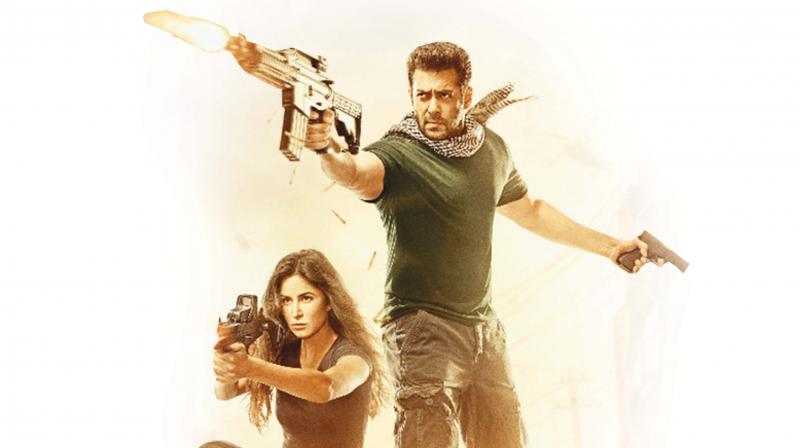 If a nation’s mainstream commercial cinema tells its story, ours is increasingly beginning to read like a disturbing diagnosis by an expert, worried psychologist.

We must be in the throes of severe disillusionment, self-loathing and identity crisis that we are happily paying Bollywood to act out our saviour complex in the theatres so often.

The self-assuredness and credibility of Haqeeqat (1964) has been replaced by a sound-and-light simulation where we first stand for the national anthem and then sit down to live out a fantasy about a nation that is decisive in decision-making, competent in its execution and stunning in impact. That all of this involves a lot of killing while constantly invoking insaniyat is part of our growing schizophrenia and psychosis.

Director-writer Ali Abbas Zafar’s Tiger Zinda Hai claims that it is asli ghatnaon pe adharit. Apparently the 2014 rescue mission of 46 Indian nurses. But as his film plays out, it’s more of a mix — of complexes and Bollywood puerility.

Tiger Zinda Hai is mounted on a mega scale that’s impressive. But inside it sits a piddi (a teeny-weeny thing) which can’t even pull off a biscuit trick.

Set in a sandy, sepia world which is ground-zero of ISIS terror is a monumental desh ki izzat se juda melodrama involving quaking Indian hostages and an Indian RAW agent wedded to an ISI hottie.

Tiger Zinda Hai places a handful of Indian operatives, alongside some sweet and docile Pakistanis, inside Syria-Iraq overrun by ISIS, to not just rescue our own, but also American, Pakistani and other hostages from a host of countries. En route, our desi Tigers destroy the evil ISIS and celebrate by first lehraoing the tiranga and then, on second thoughts, the Pakistani flag. There, delusions of potential, capability and virtue, joined together by Bollywood’s old, silly twists.

It’s the beginning of ISC’s takeover and we meet the leader, Abu Usman (Sajjad Delafrooz), a sinister, scary man with very high cheek bones. Before beheading an American he explains the genesis of his world domination plan. They are a reaction, he says, to the capitalist, imperialist, warmonger US which has been profiteering from wars for years. It’s all a game of weapons and oil, biradar.

After taking over Ikrit, he moves around with a kid in tow. But guarded as he is by a team of rather inept American extras, he gets shot and is rushed to a hospital which is run entirely by 25 Indian and 15 Pakistani nurses.

Abu Usman makes the hospital his base and the nurses his hostages, revealing to Poorna (Anupriya Goenka), the only nurse we get to know, his India connect.

America, forever trying to simultaneously save and destroy the world, plans to carpet-bomb Ikrit, hospital included.

In Delhi, RAW boss Shenoy (Girish Karnad) uses his old association with CIA to stall the attack. He has seven days to free the Indian nurses. This extraction, from the den of terror, obviously requires the skill and daring of Tiger.

We last met Tiger in 2012, when he wed ISI’s Zoya (Kabir Khan’s Ek Tha Tiger). They now dwell somewhere near the snow-clad mountains of Austria.

Tiger appears on screen as Salman Khan the superstar usually does — not as a whole, but in pieces. The feet come first, then part of a hand. It’s grabbed by a small hand — that’s Junior, child of Zoya Bibi and Tiger Saab.

It’s been five years since they quit their spying jobs, so domestication is natural. Tiger is off collecting wood for the fireplace, while Zoya is out shopping for shalgam, tinde and other loathsome desi veggies.

But since these former RAW and ISI agents will soon be on a desh-ki-izzat-ka-sawal mission, immediately we are shown that they’ve still got the chops. One threat comes from a pack of hostile wolves, the other from shoplifters.

While Zoya seems like she’s up for all sorts of action, Tiger is zinda, but seems to be in some sort of post-retirement funk. He forgets their wedding anniversary, keeps trying to fix a radio to catch Hindi songs, all the while keeping his lips pursed in a strange way.

But, as soon as Shenoy sir makes contact, Tiger is in mission mode. He puts together a team — there’s Azaan the sniper, Namit (Angad bedi) the explosive expert, and Rakesh (Kumud Mishra) who is apparently more tech-savvy than Nasa — but his plan is idiotic. It involves getting smuggled into Ikrit in oil tankers, getting hired by one creepy Firdaus (Paresh Rawal) to work at an oil factory which belongs to ISC’s No. 2 man, Amir al-Baghdadi. Once there, engineer a controlled blast in which only Tiger and his three teammates get mildly singed and are taken to the hospital with nurses.

Obvio, this long and too winding a road takes a detour when Zoya makes an appearance, along with two Pakistani operatives, to save the 15 Pakistani nurses. This presents Tiger with the opportunity to mount a joint Indo-Pak mission to free all the quaking nurses while talking of insaniyat which is above ISI-RAW, India-Pakistan dushmani.

It’s bizarre that one of India’s biggest production houses, Yash Raj Studios, would spend so much money on its lead actors, puff them up with botox, airbrush their crow’s feet and laugh lines, throw money for them to go hither-thither, to blow up this and that, order truckloads of keffiyeh and balaclavas, have many men roam the sets in ISIS fancy dress, and yet allow such lazy, shoddy writing.

The film’s screenplay is by Ali Abbas Zafar and all it can come up with are Bollywood’s pallid cliches to keep the plot going. At the hospital, for example, where Abu Usman skulks around menacingly, Tiger’s rescue plan involves doing pet kharab of ISC terrorists, and then administering behoshi ki dawai.

Not just that, Tiger can’t accomplish anything without drawing the attention of at least a battalion of ISC men. And all the terrorists after him are never carrying any firearms. One group turns up with batons, while one man pulls out a tiny little knife. It’s as if his charm disarms them.

Sorry to belabour my point, but I fell off my seat laughing when I spotted, hanging outside a tent of an ISC operative, orange overalls, all ironed and ready for a Westerner to wear for a beheading video. And the mystery of what lies at the other end of Shenoy sir’s nose pipe (nasal cannula) endures.

This and several other similar stupidities, along with many foreign policy faux pas to which both Pakistanis and Americans should object, makes Tiger Zinda Hai a bit of a moron mounted on a rather grand scale.

While the film’s plotting is tedious, there’s little joy in its action.

Katrina has one excellent action sequence, but Salman is slow and heavy, not just in body, but also mind and soul. In most of his action scenes, the efforts of the stuntmen and the CGI team are all too apparent. Often, the background score is way cooler than all the blasting and shooting.

What’s worse is that the moment when he makes a connect with the audience, smashing the fourth wall, comes too late. And it’s too little.

Just as we get excited when he stands in Rambo style, his face bloody, eyes smouldering, machine gun doing terrorists ka vinash, it’s gone. And the movie returns to its tedious, hair brained rescue plan which felt like it will never, ever end.

The film felt especially long because there are just two actors in this entire enterprise — Paresh Rawal and Sajjad Delafrooz, an Iranian actor who lives in the UAE. Both play interesting characters, both are fabulous, and yet both are given very little to do. These two men could have saved Tiger Zinda Hai if Adi Chopra had just stepped out of his Bollywood bubble for a second and seen that his film needs a story, and at least two people who can act.

Whatever little chemistry Salman Khan and Katrina Kaif may have had in the past is now gone. They both enact their coupledom and spydom with the same intensity and passion as you and I would devote to throwing a birthday party for a frenemy.

Increasingly, Salman makes a better, livelier partner with little children than with his leading ladies. He should stick to that.