Newton movie review: Democracy, of the officious & the bewildered

Watch Newton. It may just get us an Oscar. 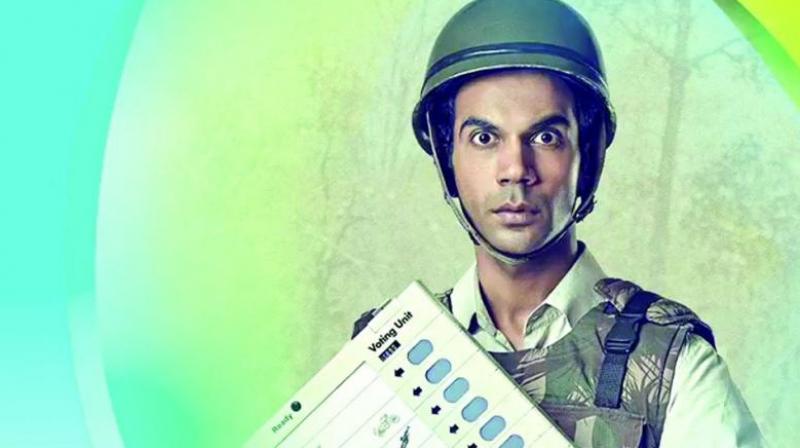 These days, the best critique of the bizarre shenanigans, hollow claims and bigoted talk of the government is not coming from Left liberals or the media, the intellectuals or even the activists. It’s coming from India’s rising pack of stand-up comics. Political and with a sharp eye for sophistry, hasate-hasate they embed in our heads a sliver of truth that would have otherwise gotten lost in the belligerent cacophony of Indians holding on to two sides of the same rope but jerking it in opposite directions.

Amit V. Masurkar is not a stand-up comic. He’s the writer-director of Newton, a movie that tells the story of democratic India’s five-yearly churning to retain its claim to being a republic. But, he has an eye for the absurd, affinity for irony and an aversion to sanctimony, howsoever philanthropic. He places his movie in the Election Commission’s gargantuan exercise of conducting free and fair elections, but then takes us, first by a helicopter and then an eight-km trek, to a speck on the map to watch the bumbling dance of democracy performed on one side by the officious and on the other by the bewildered.

His Newton doesn’t just take a peep at what lies behind the clichés that make our smug claims to being a democracy laughable. It tears them apart, gently, to reveal a state and its minions who treat people either as irritating procedural necessity or as hurdles in a day’s work. And it does all this in a tone that’s at once sharply satirical, but also very funny. Nutan Kumar (Rajkummar Rao), fed up with jokes about his name, tweaked it in Class 10 to become Newton Kumar, the exalted name lending him a tinge of flashy mystery and a sense of superior purpose.

An MSc in physics, he rejects, on principle, a marriage proposal and the promise of a motorcycle despite his father’s taunts and cribbing. There is, after all, a framed portrait of Ambedkar in his room. An officer at the collector’s daftar, he’s in reserve for election duty to Naxal-infested Dandakaranya, in Chhattisgarh, the land of armed revolution where a politician has been shot dead and chunav ka boycott has been announced.

Most are not keen to go. But lucky EC finds a volunteer in Newton, eager to perform and preside over the rites of prajatantra at a polling booth with a total of 76 registered voters who will be exercising their smavidhanik adhikar for the very first time. Newton arrives in this patch of jungle, called “Pakistan” by the armed forces who routinely sift through it with their finger on the trigger, along with two sahayaks — Shambhu and Loknath (Raghuveer Yadav). Here he meets the area commandant, Aatma Singh (Pankaj Tripathi), who thinks voting-shoting in this “sensitive” area is a waste of time. “Yahan tak aaye woh hi bahut hai,” he says to Newton.

But Newton, the presiding officer who has coaxed his sahayaks to get ready at 4 am, and who is lugging a rulebook with the diagram of the “ideal polling booth”, wants to proceed as soon as possible, along with Malko (Anjali Patil), a local assigned to be the booth level officer. Too tense and scared that he may not be able to make a significant contribution to the history of India on that particular day, Newton is dismissive of any diversion, including casual banter to pass time.

Nothing interests him — not Loknath’s story about khoon ki pyaasi zombies, nor the role Dandakaranya, literally meaning the jungle of punishment, played in the Ramayana. So focused is Newton on his calling — “to make a difference” — that he insists on locals casting their votes even if they know not which button represents whom. Refusing to recognise the futility of it all, and despite the sudden shooting, he displays arrogant impatience of the honest in its full, mental glory. Happy forever that his small rebellion in the face of deception and disruption created an insignificant but necessary ripple, whatever its cost.

Nominated on the day of its release as India’s official entry for Oscar, Newton, produced and nurtured by Drishyam Films’ Manish Mundra, stands on a very strong foundation. Its superb screenplay, packed with dialogue that are fast, crackling, political and dripping with irony, looks for and finds subterfuge and all that’s absurd in the routine and mundane. It then realises and relishes it all with its full comic potential.

Though the film is like an impartial election observer, it’s so keen not to seem or sound stuffy, that it doesn’t let go of even the smallest opportunity to make us laugh. So we get “Laal Salad”, a mine sweep before an official can take a dump, all the while watching the unravelling of official claims of voter turnout, the very casual abuse of locals, and listen in on a discussion about the rate of surrender. Newton spares no one, especially not its two protagonists.

It pokes the soldier who claims to carry on his shoulders not an automatic assault rifle but “desh ka bhaar” while standing next to villagers’ huts burnt by his men and the one-room school whose walls bear angry messages from locals who have been driven away. That Masurkar places this haughty vardi who views all locals as either khabris or Naxals in guise, against self-righteous Newton who won’t be deterred in fulfilling his constitutional duty, no matter how farcical the entire enterprise, is itself a stroke of genius.

There is no hero in this mix. Only two men with inflated, warring egos. Newton, which is almost entirely dialogue-driven, relies a lot on the performances of its actors. Raghuveer Yadav plays the archetype low-rung sarkari babu lightly. His Loknath is a cynical man who has learnt to bid his time in the labyrinth that is Government of India with a pack of cards.

But the film’s pulsating core is created by the face off between Pankaj Tripathi’s Aatma Singh and Rajkummar Rao’s Newton. Tripathi plays the two-faced henchman of a lying, deceiving state with the calm of a man who is invested in and feeding off the status quo with his usual finesse. His Aatma gets animated only when he knows that someone might actually change a thing or two.

He is, of course, often enlivened by Rao’s Newton who blinks hard, as if his eyelids are his soul’s wipers, continually renewing his view of the world. Rao’s Newton is a complexity. Though eager to do good, he carries his own honesty, mahanta as a favour to the world. His Newton, with shoulders scrunched in disappointment at all that’s around him, is at once admirable and annoying. Few can pull of a character woven with intricate, entangled motivations as Rao has. Watch Newton. It may just get us an Oscar.