Ocean’s 8 like Ghostbusters (2016) has opened a new market for more women in lead roles. 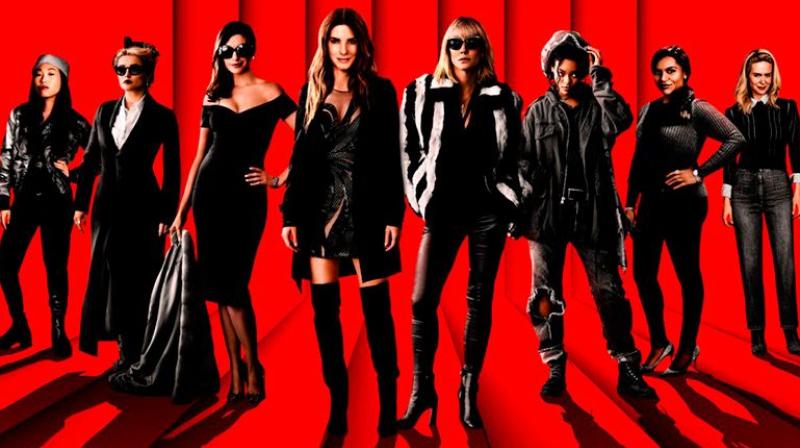 Still from the movie Ocean's 8
Rating:

Women! Surprise, surprise! All the lead roles in this release are played by women! The best con women of their times, they are experts in their industry. In Ocean’s 8, we finally have an all-woman heist movie!

To pull off any job, even a con-job you need planning, teamwork and schedule. That’s your first leadership lesson. Debbie Ocean played by Sandra Bullock, used her prison time all of, “five years, 12 days and counting”, to plan and scheme the biggest heist at the annual fundraising for the Metropolitan Museum, the Met Gala. Fact-check: The Met Gala marks the opening of the Met’s costume institute’s annual fashion exhibit. This is your IPL of fashion!

Nightclub owner, Cate Blanchett as Lou, is Debbie’s partner in crime, who is drawn into the gameplan. The movie includes celebrities, fashion and jewellery! Your favourite stars walking the red carpet, its glam at its best for those who like it! The perfect team, different ages, diverse backgrounds not just in their cultural diversity but also the variety of professions they come from and to the roles they play, this for action junkies. And heist lovers.

It takes more than just planning to get the rock solid $150 million, six-pound necklace, the Toussaint! This ceremonial necklace was designed for the Maharaja of Nawanagar in 1931 by Jacques Cartier. The timing, breaking codes, cameras, security, technology, emotions, egos and passion! There is no comparison with the previous franchise movies or any other heisty gangsta movie, because there was none made with an all-woman cast! Just like Debbie Ocean is clear in the beginning of the movie when working with Lou to create their team, she says, “A him gets noticed, a her gets ignored. And for once we would like to be ignored!”

Anna Hathaway’s celebrity tantrums as Daphne Kluger, the self-obsessed actress punches the Hathahaters who doubt her work! Awkwafina as Constance, the pickpocketer, not the water baby, she is your clever street smart thief. For those of you who don’t know her, checkout Nora Lum for her confidence and her upcoming movie, Crazy Rich Asians. Mindy Kaling plays Amrita the jewellery designer, who longs to step out of her Indian parent’s shadow. You want those beautiful pieces she designs! Sarah Paulson as Tammy, goes from housewife to that Vogue opportunity! And Rihanna as Nine Ball, true to her Bajan self (Barbados native) with accent and hair, those dreadlocks add to her hacker character. The movie brings in the perfect diversity in cast and to their characters! They are good!

But my favourite is Helena Bonham Carter who plays Rose Weil, the bankrupt fashion designer. She has excelled in her Irish role! Her silent moments are so perfect! A favourite scene in the movie is when Rose and Amrita visit Cartier! Brush up your French for this moment in the Cartier world!

Hidden gems: Yes, the movie has many special moments. The everlasting connection between the French and fashion, featuring many top fashion houses. Cuisines from a Ukrainian eatery in Manhattan’s east side to vegan (or not so vegan) soup and plating at the gala dinner. Celebrities on the red carpet and even Banksy at the Met! Art direction! One loves the aerial zoom down into New York streets and the Met, their staircase and the rooftop. Use of social media and news to scheming. Even features Tinder! Should the movie buff swipe left or right! That business lesson you bunked in college. Debbie teaches you all about planning, acquiring a team, inspiring the team, micromanagement and earning your Diwali bonus. And punchlines! Co-writers Olivia Milch also producer and Gary Ross also director emphasised on the potential of this powerful star cast calling audience attention as each character demands your respect for their life lessons!

Ocean’s 8 like Ghostbusters (2016) has opened a new market for more women in lead roles. These are just a foot in the door with new opportunities beyond a sidekick, sexual fantasy or supporting role. This is a girlfriends’ night out movie. Not just a gals group, you men should take your sister, mother, girlfriend or wife out to enjoy it!

The writer is the creative director for her graphic design company Ashita.Design. She is also adjunct faculty at the Community College Lone Star College System in the United States.