Watch this if you are in bad mood as it may help you ‘beat’ the frustrations. 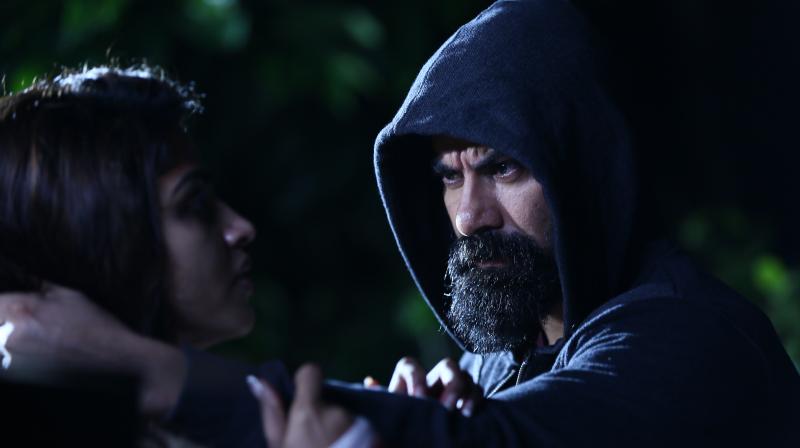 A still from Udgarsha movie.
Rating:

The maverick filmmaker of sandalwood who is known for his trademark suspense thrillers, returns with an utterly disappointing venture which is nothing short of creating a stage for bunch of 'bodybuilders’ who are mostly seen fighting with each other in vengeance! At times, the head-on collisions between men in fight sequences reminds one of chicken fights. They also scream very loud that every punch they hit or get hit, is not only heard but even felt right in between one's ears when watching the mayhem for two hours.

Breaking bones, stabbing and new kinds of torture methods are actually the main leads which is fortunately limited to adults by sparing the lives of under 18 audiences. The plot is very simple, as on the New Year's eve, a mysterious murder takes place in a resort which is buzzing with party activities to welcome the new year. The dead body is missing as well as the couple staying in the room next to the crime scene. What follows is the non-stop bloodshed right till the end!

Ironically apart from the three female characters in the movie and a lone male acto who plays a minor role and the police constables, every other man in 'Udgharsha’ has a well built body (gym bodies). Plus the hero comes with a silky boy cut hairdo which certainly looks better in comparison to the actresses. Looks like the director only wanted to cast actors who have worked hard in gym!

Unlike Sunil Kumar Desai's previous venture, this one fails on the crucial factor, which is the suspense. Yes, the only suspense is that of actors who despite getting beaten black and blue, they instantly stand ready for another round.

Amidst all that violence, it is Dhanshika who does a pretty job with her performance. Watch this if you are in bad mood as it may help you ‘beat’ the frustrations.