It takes many iconic scenes, items, quirks, accessories and settings from those films and then chides them. 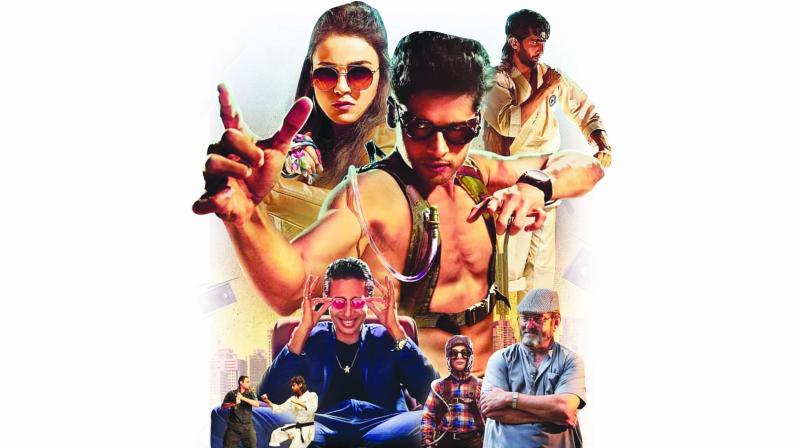 The song Nakhrewali plays during a fight scene, and the fight at the end is inspired by The Karate Kid.
Rating:

Writer-director Vasan Bala’s Mard Ko Dard Nahin Hota (The Man Who Feels No Pain) is a joyous, fun, hugely entertaining and sharp film born out of deep love and heartache for a genre that disappeared from our lives all to soon — the kung fu-karate, martial arts films.

Flitting between dreams and reality, between what’s filmy and real in its context, it picks several iconic moments, items and cliches and uses them all, getting to show and enjoy doing the filmy while laughing at itself for doing so. In essence, having a jolly good time all along.

Bala’s film has the feel and texture of sweaty, B-grade, kung fu films that many of us of a certain vintage — with access to a bulky video player and a monthly account with a video parlour bhaiyya — grew up watching. But it’s more than that.

Cool according to most of those action movies was defined as silent, male and macho. MKDNH redefines cool as middle-class goofy, and it’s both — male and female. MKDNH doesn’t just usurp the genre and all its tropes, making the film not just comic book fabulous in a Deadpool way, but also oh-so-political.

It takes many iconic scenes, items, quirks, accessories and settings from those films and then chides them.

Even the film’s title turns the very chauvinistic boast on its head, suggesting that dard nahin hona is a bimari, not a superpower. The film spares nothing — from bindi to the poet Rumi and his pretentious aficionados, from boy-talk about Kamal Haasan versus Rajini fans to random splashes of political commentary.

MKDNH is an ode to the days of VHS tapes, a film for those crazies who love the trashy, who as teenagers sat down in living rooms, often on the floor, wide-eyed, waiting for magic to begin.

Like all superheroes with their thinking blurbs, we hear Surya (Abhimanyu Dassani) think as he faces a gang of uniformed security men charging at him.

The opening shot itself — with Surya in a maroon track suit, action slo-mo, funny talk — sets the tone and then the film goes into flashback to explain… how, who, why, and what the superhero’s power and weakness is.

Telling you would be a spoiler, so suffice to say, paani peete rehna chahiye.

The flashback involves a pregnant Aai (Shweta Basu Prasad), a perennially harried Baba (Jimit Trivedi), Ajoba (grandfather played by Mahesh Manjrekar) and a tragedy at the hands of chain snatchers.

Soon there’s a diagnosis from the doctor that we are told to look up on Google. Baba can’t deal with Surya’s peculiar problem, and wants to keep him safe and locked up. But Ajoba, who believes “control nahin karna, care karna hai”, trains him in secret — how to protect himself, how to fight, how to survive.

And when attacked from all sides in school, little but toofani Supri lunges to little Surya’s defence.

Supri has her own sad story, and doesn’t believe Surya when he says “Aankhon ke laser se maar de” as her drunk dad is dragging her away.

As Surya grows up, wearing swimming goggles, a backpack and repeatedly saying “Ouch”, he devotes himself to watching every manner of martial arts film — Drunken Master, My Lucky Master, Game of Death… — in secret, on VHS tapes. From these he learns karate and kung fu, but then comes upon a real-life fight — 100-man fight by the one-legged Karate Mani (Gulshan Devaiah) and bows respectfully. He has found his sensei — master.

MKDNH is split in two equal parts — while the first half is about the hero, the second is devoted to the villain, Jimmy, and his humshakal brother, Karate Mani. Or, as the film tells us, a clichéd drunk karate master and the clichéd psychotic villain.

En route to meeting his hero, Surya stops in his tracks to watch in awe a girl (Radhika Madan) kick ass in a badass way

Like Supri, she too has a bad man tugging at her. And while she saves others, she needs saving, too.

And then there’s the one who felt spurned by his appa and is after Karate Mani’s locket… Finally, a chain chor Surya is determined to destroy...

Movies become dear to us for reasons big and small. But there are some, with their naughty asides, tiny baubles, bits of dialogue loaded with in-jokes that we get and feel a unique personal connect with. With such films we form a relationship, a personal one.
MKDNH is that kind of film.

I loved it. I have watched it twice already — at the Toronto International Film Festival last year where it won the People’s Choice Award, and now.

And this week I plan to watch it again.

MKDNH’s strength lies in its clever, political screenplay, funny, crisp dialogue and the film’s goofy disposition to have fun. There’s freshness to how all its characters act and speak, and then there’s the injection of the real in the filmy for comic effect, especially at Jimmy’s Security Services, but the film’s magic lies in how it uses clichés and classic scenes.

Geraftar makes repeated appearances, Langra Mani eats an orange during a confrontation, and Jimmy eats banana chips while watching a fight he has organised, taking us back to that fight in Big Boss when Bruce Lee ate a packet of potato chips.

The song Nakhrewali plays during a fight scene, and the fight at the end is inspired by The Karate Kid.

Even Terminator makes an appearance, for no reason. Chumma. For fun.

Apart from the writing, the film’s real coup is its cast. Each and everyone is just fabulous. Mahesh Manjrekar, is the film’s soul — warm, wise and brilliant as well.

Gulshan Devaiya is in a cocky league of his own, perhaps sharing that space with other character acts as, Randeep Hooda, Irrfan Khan and Pankaj Tripathi. He is always fabulous. Here he brings the film alive with both, his chamkeela performance as Jimmy, and one-legged fighting as Karate Mani. I bow to him.

What a joy it is to discover, on your own and not through the PR machine in overdrive that the star of a film is the son of a much loved actress.

Abhimanyu Dassani, son of Bhagyashree (Maine Pyaar Kiya), has that boy-next-door charm, but also acting and fighting chops that are quite impressive. How Bollywood welcomes him will be interesting to watch.

What can I say about Radhika Madan? She bowled me over in last year’s Pataakha, and she made me fall in love with her all over again in MKDNH. Petite and very pretty, she is a naturally talented actress and a force to be reckoned with.