LKG movie review: Enjoyable but only in parts

It is as if we are watching one of those comedy stage dramas, which will evoke laughter in the moment. 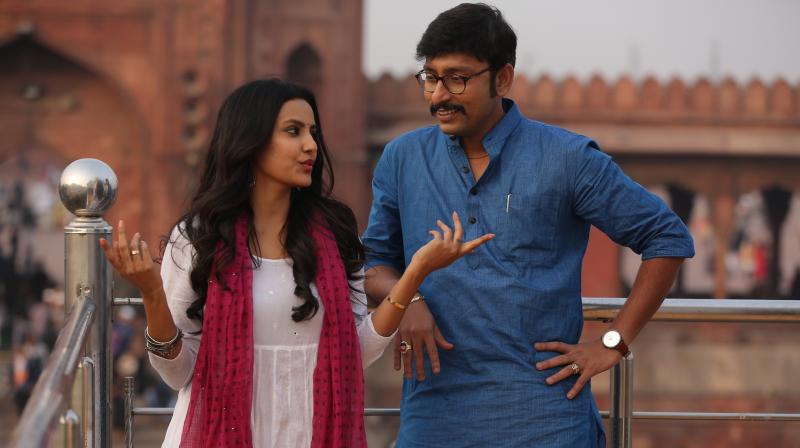 LKG seemingly is a compilation of the recent political climate in the form of videos, memes and trolls and is more of a spoof rather with a solid script. It is as if we are watching one of those comedy stage dramas, which will evoke laughter in the moment.

The movie begins with the CM swearing in ceremony scene, when saffron clad swamiji remains seated while Tamizh Thaai Vazhthu is being aired and on the other side the Governor is seen winking at a lady. As it sets the right mood for a parody, the CM is being shot.

Cut to the past, LKG with his expanded name Lalkudi Karuppaiah Gandhi is a ward councilor who is power ambitious and wants to make it big by hook or crook. His ideal role models are scheming Nagaraja Cholan (Sathyaraj) of Amaidhipadai and Aranganathar (Raghuvaran) of Mudhalvan. Unlike his dad Azhagu Meiyappan (Nanjil Sampath), who is a failed politician, LKG aspires to become big in a short span.  LKG seeks the help of a corporate group headed by Sara M Swamy (Priya Anand) whose actual name is Sarala Munuswamy(!). Sara’s team is good at strategizing schemes to help politicos to win elections. Thus, LKG becomes popular overnight not only in the state, but also nationwide. Impressed with his ways, Bojappan (Ramkumar) the present CM gives LKG a seat to contest from ex-CM constituency. But LKG must fight hard with the hugely popular Ramaraj Pandian (JK Riteesh) from the same place who controls caste votes. The reminder is all about the dirty battle of the duo to override each other.

Besides essaying the lead, RJ Balaji has doubled up as the writer as well. He plays to his strength mouthing funny political one-liners and touches upon several contemporary issues like Jallikattu, CM’s hospitalization and the subsequent bills raised from the hospital, the two major political parties which invariably ruling the state, taking a dig at media sensationalizing things, Bigg Boss, Thala - Thalapathy reference etc. But after a point the jokes become repetitive and mandatory and do not take the story anywhere. One wonders as why is he so loud most of the time? Priya Anand as the corporate girl looks good. Nanjil Sampath and JK Riteesh are adequate. Though LKG imparts a message to youth with his long monologue in the climax, there's still a twist to it.

Technically, Leon James songs and rerecording deserves mention. The political satire is enjoyable only in parts.