Enter the theatre at your own risk or at least carry a punching bag along with you if you are unfortunate to see it. 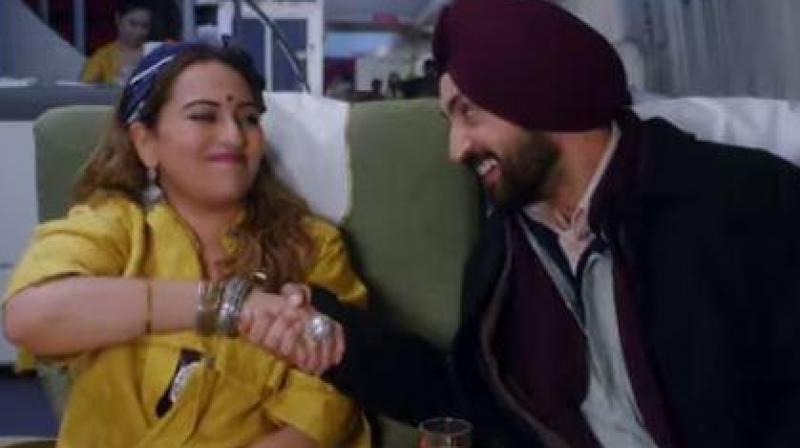 Sonakshi Sinha and Diljit Dosanjh in a still from 'Welcome to New York.'
Rating:

Are Bollywood films really made to entertain the audience or to promote their own lobby and people associated to it? What was debut director Chakri Toleti thinking while making this film? The film is a yawn fest which will test your patience at every second. Looking at the kind of the film it is, it is a shame on the Indian film industry to even support or market it. Big stars, big banners, it's a bloody money and power game.

Teji (Diljit Dosanjh), a recovery agent aspires to become an actor someday. Jeenal (Sonakshi Sinha) aspires to be a famous fashion designer. The two bag a lucky ticket to an award show in New York.

Lara Dutta, who has been working for show organiser Gary's (Boman Irani) event since ages, demands a partnership in the company, but Gary refuses to do so. Lara plots Teji and Jeenal to take revenge from Gary. The plan goes haywire when Karan Johar (as himself), the host of the show, gets kidnapped. Will Lara win over Teji and Jeenal's dreams?

Director Chakri Toleti clearly directs this self-proclaimed entertainer to make an entry in Bollywood. The film has no head or tail. The background score is noisy, and the characters Chakri has shown are shallow and not even close to funny. The film looked even bad than a media assignment. The best part of the film is its interval. In fact, the only comic punches are the ones shown in the trailer. Don't expect anything beyond that in the film.

The most annoying part of the film is Karan Johar's double role. The only good thing is that he openly acts effeminate which is commendable, but he is even worse than Bombay Velvet here. Dijlit Dosanjh is average, and Sonakshi Sihna is a total waste especially when she has a good screen time amidst the whole jing bang. Boman Irani is noticeable, but Lara Dutta is just about okay in her grey shade role. Riteish Deshmukh, Sushant Singh Rajput, Rana Daggubati, Aditya Roy Kapoor, Salman Khan, Katrina Kaif are fillers and nothing more.

The film is a torturous endorsement of IIFA. The only question popping up in your mind is, 'What is it?' Is it a film or a fancy documentary on IIFA Awards in New York. Enter the theatre at your own risk or at least carry a punching bag along with you if you are unfortunate to see it.