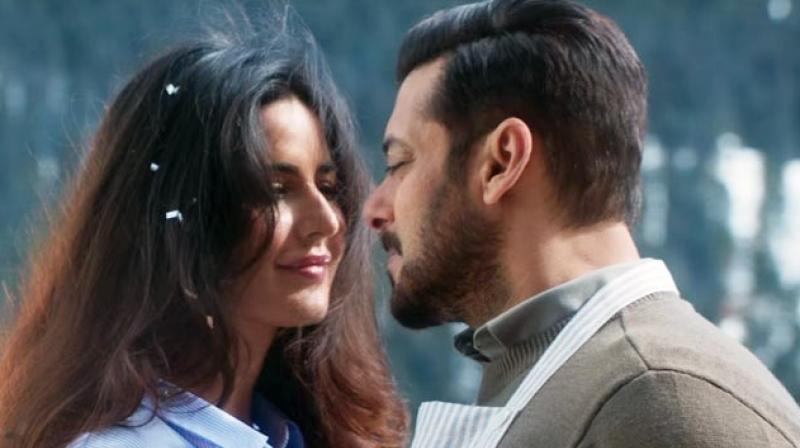 'Tiger Zinda Hai' is Salman's next movie after Kabir Khan's 'Tubelight', which failed to do any magic at the box office.
Rating:

Salman Khan is not an actor, he is an emotion. Until he joined hands with director Kabir Khan, who has a flair for making war films in Bollywood, the actor wasn't really a content-driven star. 'Ek Tha Tiger' or 'Bajrangi Bhaijaan', both the films had a plot, and looks like Salman's high-octane action and thrilling plot saves 'Tiger Zinda Hai' after his last 'Tubelight' sank without a trace.

Tiger (Salman Khan), an Indian RAW agent and his wife Zoya (Katrina Kaif), an ISI agent are happily married and settled in Austria. Abu Usman (Sajjad Delafrooz), head of ISC and his army make 25 nurses his hostages at Iqrit hospital, Iraq. In order to save the nurses, Shenoy (Girish Karnad), head of RAW appoints Tiger and what happens next is certainly entertaining to watch.

Seems like director Ali Abbas Zafar has the best of understanding to tackle and portray such a big star like Salman on screen, 'Sultan' being their last. Ali definitely makes a grand action film, surely Kabir Khan has given a good amount of assistance in his previous films all these years.

He smoothly takes 'Ek Tha Tiger' franchise ahead by telling a real story and inserting a whole lot of drama and thrill. The film also touches upon relationships between India and Pakistan but subtly. The biggest hiccup of the film is its length. It could have been easily chopped by 15-20 minutes. Also, towards the climax, Katrina suddenly vanishes from the film, and the whole focus shifts as to how Salman will save the nurses. In fact, pre interval, the sudden entry of Katrina is quite melodramatic.

The funniest part of Salman Khan films is that he is always shown as a god's man. In 'Tiger Zinda Hai', he has crossed boundaries of unbelievability. Like how he easily rescues his son from the monstrous wolfs, really? For instance, how conveniently Salman and his gang cracks the mission.

Writing a review for a Salman Khan film is a sheer waste of time. He is worshiped by zillions of his fans across the globe who are certainly ignorant towards criticism. His larger-than-life image is constant with his films, and 'Tiger Zinda Hai' is no less. Katrina Kaif looks pretty especially in the song 'Dil Diya Gallan' and does action superbly well. Angad Bedi has a short role, but he is good. Paresh Rawal adds comic elements to this serious film. He is like a breath of  fresh air.

Overall, 'Tiger Zinda Hai' won't disappoint you. After 'Sultan', Salman Khan and Ali Abbas Zafar pack a solid punch yet again. Especially, when there were no big releases for past three weeks, TZH can be worth watching this festive season.