Das is able to create Manto’s world in Bombay that seems to be lived in happily, and one that comes apart when he moves to Lahore. 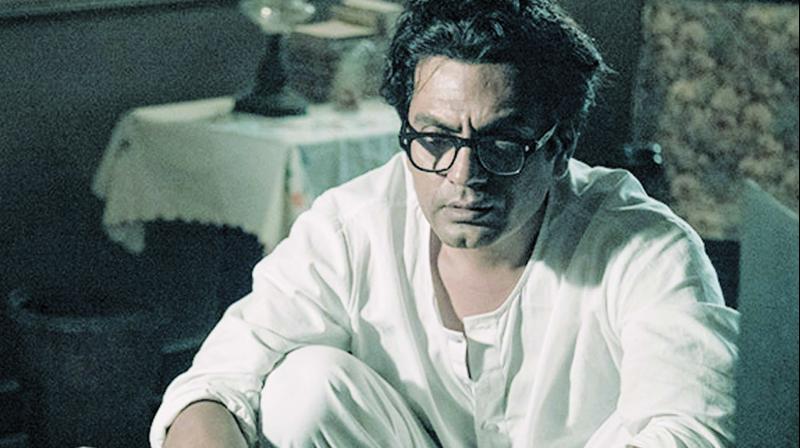 Still from the movie Manto
Rating:

Writer-director Nandita Das is quite brave to attempt a movie on the subcontinent’s favourite writer. Any moves on Saadat Hasan Manto, then, will be held to intense scrutiny and very high standards because all those who have read Manto carry a piece of him within — heart-wrenching instances of human feral behaviour, glimpses of the death of humanity, a bloody slice of the tragedy of a nation, people split.

I first watched Das’ Manto in May, at the Cannes Film Festival that hosted the film’s world premiere. I was moved by the depressing contrast and similarities between Manto’s India then and now. I admired many things in it — the resonance Manto’s life and the issues he struggled with have today, as well as Nawazuddin Siddiqui and Rasika Dugal’s excellent performance — but I didn’t feel the love I wanted to.

It took me a second viewing to put my finger on why Das’ Manto worked for me only in parts.

Though Nandita Das’ Manto is visually, cinematically flat, with the camera remaining a calm observer, never a player, her screenplay is almost scholarly. She weaves in a lot of Manto’s life and writing and tells the story of one of our finest, sharpest chroniclers as it should be told. She puts delicate semicolons in his life’s story to take off on tangents of his imagination, his writing, his stories — about prostitutes and Partition.

While this works to some extent when she presents Manto’s stories — often abridged down to their climax or punch line — because we are so familiar with them, this narrative style snuffs out the significance of what he said when she wrenches it out of context and uses them as quotes to breathe life into her character, Manto.

The other, bigger problems are that Das’ screenplay frames Manto and his work only within disapproval of colleagues or the state’s hostile opposition to it, and worse, she concocts dialogue, details to explain some of his inexplicable choices, like his decision to move to Pakistan.

It’s perhaps a symptom of our time that Das has written and directed Manto with a heavy heart and a heavier hand. She presents the decline and demise of Manto amidst murmurs of his fame and brilliance, never once allowing a full-throated celebration of his life and work.

Her movie, thus, rises when it is telling his stories, but is too despondent and melancholic, often claustrophobically so, when it’s with Manto the man.

Das’ Manto opens just before Independence, treating us to his story Ten Rupees en route to Bombay Talkies and then Filmistan to collect his script-writing fee.

This dreamy, nostalgic setting of Bollywood, with shiny vintage cars, elongated shirt collars and Jaddanbai (Nargis’ mother) is made tacky by hammy actors reducing K. Asif and Ashok Kumar to caricatures by imitating them.

There are some brief, sweet personal moments when Manto is with his wife Safia (Rasika Dugal) and his bestie Shyam Chadda (Tahir Bhasin), but there’s also the Progressive Writers’ Association’s disapproval of his bleak stories that we get a glimpse of.

All too soon, however, there’s Partition, threatening letters to Filmistan for employing too many Muslims, a growing fear psychosis within Manto that wrenches from him his belief in the city he loved, and soon he is off to Lahore, to live in Laxmi Mansion.

Despite the clawing morality of a budding Islamic nation, it’s in Pakistan that the afsana nigar wrote some of his best, most powerful work — the Partition stories. It’s also here that he faced the scary prospect of a jail term, though what stung him the most during the trial against Thanda Gosht was Faiz Ahmed Faiz’s deliberately mean remark that while not obscene, Manto’s stories were not “literature” either.

Das is able to create Manto’s world in Bombay that seems to be lived in happily, and one that comes apart when he moves to Lahore. She cleverly weaves in moments from Manto’s own life to bring in his stories — from his stay at a mental asylum (for de-addiction purposes), she takes us to Toba Tek Singh.

Though we don’t get the full stories, just brief impressions of them, these stories linger in our mind and bodies because each one is powered by intensely physical performances by Gurdas Maan, Vinod Nagpal, Ranvir Shorey, Paresh Rawal, Tillotama Shome and Divya Dutta.

Born in 1912 in Amritsar, Manto’s short (he died at the age of 42) but peripatetic life took him from Amritsar to Aligarh to Kashmir to Lahore to Mumbai and again to Lahore, this time for good.

But before Manto’s trials and tribulations began, there was the writer from Amritsar who translated Victor Hugo’s The Last Day of a Condemned Man in Urdu in two weeks, the boy who grew up close to the Jallianwala Bagh massacre and to whom civil disobedience came naturally. Then there was Manto who allegedly had a brief fling with a Kashmiri girl, then came to Bombay to edit a film magazine, fell in love with the city and its people, and wrote gossipy profiles and inspired scripts, including the 1954 Mirza Ghalib starring Bharat Bhushan.

Yet Das chooses to chronicle the life and work of Manto only in juxtaposition — to accusations of being obsessed with prostitutes, with the obscene; to familial responsibilities ignored; to court cases and obscenity trials, first in India and then in Pakistan, that chiselled at his soul; a life’s end measured in empty booze bottles and pending payments.

Even when the like-minded meet, including Manto’s incendiary cohort Chughtai, the conversations Das creates present them not as intellectually challenging, subversive, creative characters, but as fun-sucking, heavy-breathing academics.

But, unpardonably, Das puts certain words into certain mouths that would be considered sacrilegious if we weren’t dealing with Manto.

Just like Manto’s family, fearing the wrath of “mad mullahs”, decided not to write the epitaph he wanted on his grave, Das scrimps on truth and twists Manto’s story to make it say what she wants to. She creates a real, decisive moment when Manto made up his mind to move to Pakistan when there really wasn’t any one, but too many incidents and messages being read as ominous by him.

The real conversation between Shyam and Manto is much more poignant, much more memorable, and according to a letter his wife wrote to a biographer years later, Filmistan had served him a termination letter that tipped the scales in Pakistan’s favour.

Also, from Lahore, Manto often wrote to Ismat Chughtai, even asking her to help him return to Bombay. According to his biographers, she did not respond. This false finality, placed in rather melodramatic episodes is especially jarring given that it’s Manto’s life Das was mounting on the big screen.

It still baffles many, and me, why Manto moved to Pakistan in the first place, and why he didn’t move back to India when so many others — Sahir Ludhianvi, Bade Ghulam Ali Khan, Begum Para, Qurratulain Hyder — did. But then, that unanswered question is, perhaps, the only fitting epilogue for a man who had a visceral aversion to judgement, sentiment, and preferred to leave even his most dramatic stories open-ended.

Thanks to Das’ script, and her repeated attempts to close chapters, the single-tone, melancholic characterisation of Manto abides. Yet, Nawazuddin Siddiqui is able to add to his Manto many shades of a man of many extremes.

Siddiqui’s Manto is vain, warm, arrogant, quarrelsome and brilliant. There are no half-ways with him — he is proud to a fault, and humane to a fault as well. He dotes on his family, but also forgets about them when drinking.

Through his walk and stare, Siddiqui conveys the confusion of a man unable to live with his own choices, and the disorientation of a sensitive soul in times of bloody madness.

Rasika Dugal, who plays his suffering wife Safia, invests her character and the film with touching tenderness that, at times, shines a warm glow on Manto the friend, the writer, the family man. And at times it shows a life that’s fading.
Watch it.