The film has only glorified dialogues that has no real meaning to it, better to enjoy your weekend with other gangster flicks over pizza! 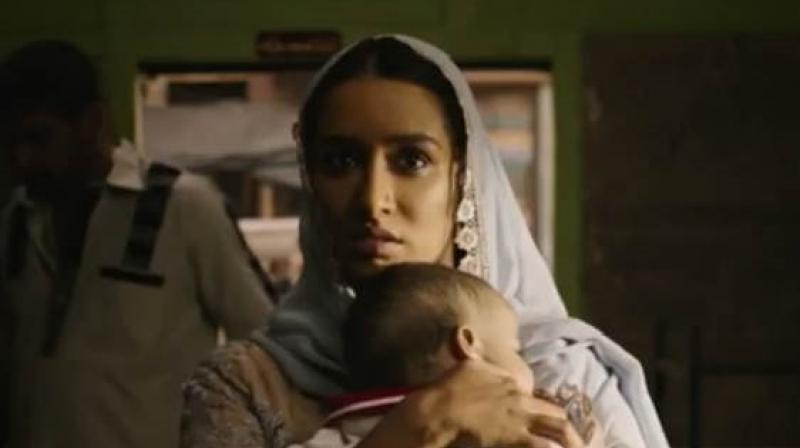 Shraddha Kapoor in and as 'Haseena Parkar.'
Rating:

It is a huge responsibility for a director who touches upon a story based on real-life incidents against the backdrop of underworld and especially when the crime thriller genre has been extensively explored in Bollywood. After films like Once Upon A Time In Mumbaai,  Black Friday and Company, to name a few, which showed underworld through a vivid filter, Apoorva Lakhia's latest offering Haseena Parkar fails to impress. It is surely not on the list of recommended gangster films.

Haseena Parkar (Shraddha Kapoor) lives with her family and is very close to her elder brother Dawood Ibrahim (Siddhanth Kapoor). Dawood always puts his father in a spot by doing petty illegal things around the vicinity. In the meantime, Haseena gets married to Ibrahim Parkar (Ankur Bhatia). She lives a happy life until Ibrahim gets murdered by the rivals of Dawood.

Soon after, Dawood shifts to Dubai and Haseena emerges as a lady don of Dongri. Bombay police fails to trace Dawood and hence summons Haseena in the session court for further investigations including Bombay bomb blasts held in 1993. Will Haseena come out clean or be accused of her brother's crime? Rest of the film unfolds this question.

Director Apoorva Lakhia has not tried his hand directing a gangster film for the first time. Earlier, his Shootout At Lokhandwala, which highlighted the real-life gunbattle of Maya Dolas in 1991, that released in 2007, was a good attempt by the director, but this time, he totally goes haywire with Haseena's life. Seems he aimed to make a gripping biopic, but it turned out to be boring and meaningless. One gets confused whether to sympathise with Haseena or hate her. The film is a complete a mouthpiece of Dawood's sister. Precisely, there is no reason to make a life on his sister's life when there is nothing extraordinary about it. It is highly peachy, at the same time, has a very diplomatic approach towards Dawood and his crimes. Still wondering how many filters it passed through on its scripting stage, censor or maybe Dawood's family. Was it important for the makers to make a film on Haseena or does India lack enough noted people on which biopics can be made?

Apoorva also fails to create the era of 1970's and the misfit cast spoiled the rest of it. Few shots where the action sequences just freezes on screen are awful. The background score is a lot similar to Sarkar franchise, but it is surely horrifying than Conjuring series (laughs). The biggest flaw of the film is its shoddy execution. Dawood, who influenced her sister's life, should have been shown in a proper way and not superficially. With an open-ended climax, Apoorva has no conclusion to it especially when it is based on real-life incidents. A little more research would have saved this sinking ship or does he purposely leave his film on such a note to play safe? This is for you to guess!

Shraddha Kapoor, who is touted as a non-actor has surely acted in this one outside her comfort zone, but she is not satisfying. On the contrary, the makers and the actress herself took this chance to play the role of Haseena to prove that a non actor can pull this off with ease, but it is disappointing to see Shraddha who doesn't look apt for this role. Maybe Tabu or Vidya Balan would have done justice to Haseena. From her physicality to dialogue deliveries, Shraddha does a poor job. She is too unprepared to play such a mature role. Siddhanth Kapoor is surely an end to the era of playing Dawood in our Bollywood films. He is a tiny-looking don wandering everywhere, which is laughable. Dawood surely must be cursing the makers for giving his role to him. His style and mannerisms are way too dramatic. The saving grace of the film is Ankur Bhatia who looks amazing in his short role. He is hot as Ibrahim Parkar and does his role with conviction. He might not have a commercial value today, but definitely has a promising future here.

Haseena Parkar is a superficial drama with no grit. The film has only glorified dialogues that has no real meaning to it. It's better to enjoy your weekend with other gangster flicks over pizza!