Lipstick Under My Burkha movie review: Risque, risky desires, and nothing but

Lipstick Under My Burkha is about four women who are “behuda, besharam, badchalan”. 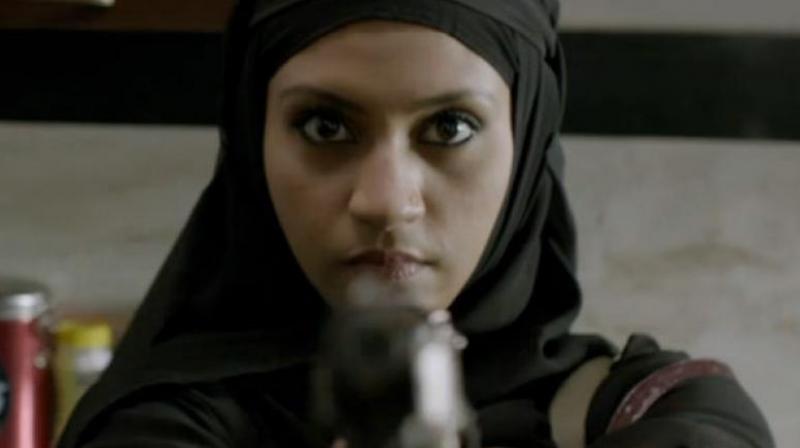 A still from 'Lipstick Under My Burkha'
Rating:

Rehana Abidi (Plabita Borthakur), a college fresher in Bhopal, wears jeans and keds under her burkha, which she takes off before entering campus. She is dying to clear the auditions and join the college band.

Leila (Aahana Kumra) works in a beauty parlour and lives with her mother (Sonal Jha) who plans to get her married to Manoj (Vaibbhav Tatwawadi) because he has promised her a house in exchange for her daughter’s hand. Leila’s fanci (fiance) is sweet, but also square and dull.

Shireen Akhtar (Konkona Sen Sharma) has three young boys and a husband who has just returned from Saudi after seven years.

“Hai, jalta hai,” she says, every time he enters her. Caught in a cycle of abortions and pregnancies, she suffers sex as her painful duty.

Bhuaji (Ratna Pathak Shah) runs Hawai Manzil, a large, 1902 haveli where they all live. Snubbing overtures of greedy builders to sell the land, she keeps her family — whatever’s left of it after the Bhopal gas kand — and a variety of tenants together, while overseeing the family halwai shop.

These are not Rosy’s exact words, just my reconstruction of her fantasies that are adrift.

Rosy’s teasing, risqué chatter of aroused sensuality — in a lascivious voiceover by Lillete Dubey — comes on at regular intervals, announced by naughty, impish, lilting notes. Sort of like Amélie (2001), but to different effect.

The music arrives first, doing a little jig, as if telling us to get in the mood for some foreplay. Rosy is a character who lives in all these women. The film wants us to see and understand their reality, but it wants us unbutton, slip into a slinky something and recline in their dream worlds.

This delicious, soft pornographic aside — one that tells how these women, hypnotised by their own fantasies, can’t, won’t stop — is a powerful trick, making sure we don’t get lost in their depressing reality.

Hidden in Bhuaji’s dharmik Chinta Haran Jantri is an ashleel novel, Rosy’s Lipstick Waale Sapne. So when swimming coach Jaspal (Jagat Singh Solanki) puts her in touch with her own body, identity, Bhuaji becomes Usha, and then she wants more…

Leila — whose hot poses with Arshad (Vikrant Massey) sit in an album that they peddle as a business plan — can’t bear the thought of living in Manoj’s well-appointed apartment. She nurses a ticket to Delhi.

Obsessed with Miley Cyrus, Rehana walks around mall shops, secretly accessorising her dream. Shireen, one of the top sales girls of Magic Products who can sell anything, from pest control gun to laugh-line dissolving nipples, wants to become a sales trainer. But committing a 9 to 6 job means she has to first tell her husband that she works.

Like Rosy — wanton, wearing a bright red lipstick and just looking out of the window — these women are moving slowly, cautiously towards their dreams.

But then something happens. Life throws a spanner, or just disappoints. Instead of retreating, they jump, head first, to claim their desire — to work, have sex, try their luck with a naujawan…

Desires are not plans. They are neither practical nor are they well thought through. Mostly they are based on the little bit of the world we see from our windows, from the slit in our burkhas. To realise them, you have to often set yourself on fire.

Lipstick Under My Burkha is about four women who are “behuda, besharam, badchalan”.

These women are living lives that are dull, boring and constrained in different ways, and yet they are bound together by their desires.

To tell their stories writer-director Alankrita Shrivastava takes an empowering route — cinematically and politically. She focuses on what these women want and how they go about getting it, even when life is drawing scowling circles around them, telling them they shouldn’t, mustn’t, can’t.

Lipstick Under My Burkha ventriloquises what’s going on in their heads even as we watch them navigate life with eyes downcast.

It’s a quirky and rather daunting way to tell the story. You’ve got to be very skilled and very cocky to pull this off.

Lipstick’s screenplay is stuffed to the gills with original ideas, characters and situations, and every scene and every character is etched with sharp, feminist politics, but with a lightness that’s rather stunning.

Scenes are cleverly constructed and linked, with not a single moment that’s superfluous or unnecessary.

A lot happens, and yet the film skips jauntily, thanks in large part to the fabulous background score by Mangesh Dhakde.

Repeatedly, the film surprises us with what its characters do and say — a woman casually talks about how excited  her husband has been since he saw her “Brazil”, and there’s talk of how some men want to touch women’s jannat, while many won’t.

The film’s dialogue are crackling and full of flavour. Each character gets lines with the timbre that suits their character’s personality and temperament.

The song Le li, le li, le li jaan, bina puche haye haye, written by Anvita Dutt, and composed and sung by Zebunnisa Bangash (one part of the two-member Zeb and Haniya band), is based on a popular Afghani folk song. It captures and conveys the film’s, and its main characters’ spirit in the foot-tapping, shoulder-shaking manner that is delightful.

Lipstick Under My Burkha is densely populated with excellent actors playing real, lively characters. The film’s peripheral characters — the wedding singer, parlour lady, and the supporting ones, like Shireen’s husband, Rehana’s father, Leila’s mother and boyfriend, Coach Jaspal with his Haryanvi accent, creepy drummer Dhruv Bose (Shashank Arora), create a bustling, believable world in which these women live. They give them depth and make their desires believable.

You have to be particularly grumpy with life if you grudge anything in Lipstick Under My Burkha.

It is one of the most joyous films I have seen recently, despite the fact that it’s all about women’s forbidden desires, unrealised dreams.

It’s a cool, funny, political, subversive film that empowers and shifts something inside you. It also brings women behind the burkha alive in a way I haven’t seen in a long time. The film treats them as women, and whatever they may be wearing as clothes, and just like that, burkha stops being a thing. And is just a metaphor.

Ratna Pathak plays Bhuaji with the sort of gently exaggerated, affected nazakat we have come to expect of her. Konkona Sen Sharma is very good, very effective. Despite her rather strong personality and screen presence, she’s able to convey the helplessness of her character.

All the actors are excellent. But my favourite was Aahana Kumra. I have met many Leilas. They are all mental and fabulous. They make life difficult and worth living.