Each PoV character is isolated against his vast, expansive background, compounding the loneliness of each soldier. 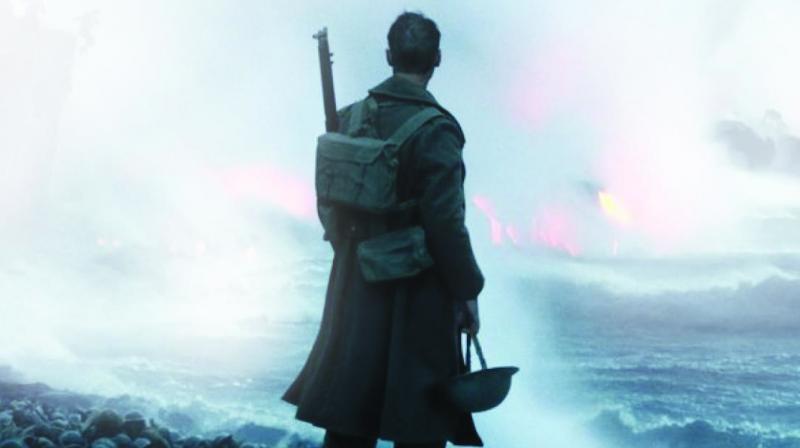 A still from the film Dunkirk
Rating:

Ten years ago, Joe Wright’s Atonement offered a long tracking shot of the protagonist meandering through hundreds of thousands of men on the beaches of Dunkirk. That scene never fails to bring a tear to the eye as it evokes the loneliness and endless waiting of the soldier amidst the chaos of war. It is about his despair, his desire for deliverance, not about a collective sense of survival rooted in nationalism. The first words uttered in Christopher Nolan’s Dunkirk are ‘English! I am English!’ as Tommy, a private, is about to get shot by French soldiers. The sense of identity is indispensable as it was the British army that was evacuated first, while the Allied forces comprising French, Belgian, and Canadian soldiers were rescued later.

However, Nolan undercuts the toxicity of worshipping nationhood by eschewing the nostalgic, emotionally manipulative self-aggrandisement – a standard Hollywood feature best exemplified by Oliver Stone’s Platoon and Spielberg’s Saving Private Ryan, the latter redeemed only by its first 27 minutes. The technical achievement of that scene notwithstanding, Nolan is careful to keep his film as clutter-free as possible. There are no piled up bodies in pain that overwhelm the screen, no gruesomely dismembered figures. More significantly, there is no mention of Germany or the Nazis; no sign of the swastika. The enemy is simply that – ‘the enemy’.

Where Nolan does complicate matters – and interestingly so – is the narrative structure. Three different points of view are presented. Tommy, on land, makes desperate attempts to flee but because rank entails privilege in the army, he, a private, must await his turn. On the sea, Mr Dawson, one of the thousands of civilians who offered their private boats for the rescue mission, helps a shell-shocked survivor of a U-boat attack. Farrier and Collins, two surviving RAF pilots, struggle to bring down enemy aircrafts (although this part looks like a PoV video game.) These three perspectives are non-linear; the revelation of where one ends and the other begins makes a suspense thriller out of the war film. To add to the suspense is Hans Zimmer’s score; a pocket watch relentlessly keeps ticking, a sign of the advancing enemy troops while the Allied forces are trapped between hell and high water.

Each PoV character is isolated against his vast, expansive background, compounding the loneliness of each soldier. It is a collective effort, of course, but the fear for survival is uniquely personal. When a few soldiers question the morality of their fellow Englishmen in leaving the French behind, one man replies, ‘Survival is fear. Survival is greed.’ Greed. Even as the film celebrates the heroics of its men, it is conscious enough to scrape at the flaws of the armed forces. ‘We’re regimental brothers, mate. It is just the way it is,’ says Alex, as he tries to abandon his rescuers on the grounds that they belong to a different regiment. No war film can accurately depict the horrors of war, but what it can offer in its stead is nostalgia, which is almost inevitable given how much of history is the narrative of the victors.

With all the desire for a home which is practically visible across the channel, Dunkirk comes perilously close to catering to a pro-Brexit sentiment. Much is made about the isolation that haunted the British during this period, and yet they successfully executed Operation Dynamo. But when the character who mistreats the French and his fellowmen alike is portrayed by a much admired figure of pop-culture (Harry Styles), the unfairness of the situation becomes all the more striking. To my mind, this was a rather clever casting decision, something that perennial do-gooder Tom Hanks should learn from.

Another salient feature of Dunkirk is the use of very little dialogue. The ticking clock does most of the job in conveying the tension, and the vast space against which we see a plane or a boat emphasises the grand and nearly insurmountable scale of this war. No pompous, soul-stirring speeches are made. Mr Dawson articulates his loss in one small sentence. The threat of a fast approaching enemy plane is seen in the rising horror on Kenneth Branagh’s face. In a remarkable feat, Churchill’s sonorous, desk-thumping speech, which is never shown, is stuttered over by a young soldier as he reads it from a newspaper. Quite like Kubrick, Nolan is not afraid to puncture the ‘glorious’ nature of war as despair and cowardice take over the soldiers, and that is the highest praise I can heap.