The Zookeeper’s Wife movie review: The sanitisation of the Holocaust

The Jews are not given a voice; not once do they articulate their experience at the ghettos. 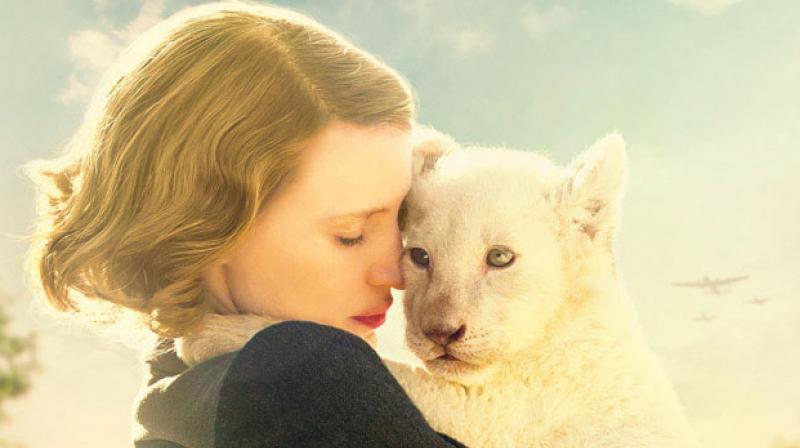 A still from the movie The Zookeeper’s Wife.
Rating:

Based on Diane Ackerman’s 2007 novel of the same name, The Zookeeper’s Wife is about how a married couple – Antonina and Jan Zabinski – rescue Jews during the Second World War. Together they run the Warsaw Zoo, which harbours everything from llama to lion. The German invasion of Poland threatens to shut the zoo down and send the Zabinskis in exile, when Jan devices a plan to keep their home intact by supplying food to the Nazis. To provide them with fresh bacon/ham/pork, the pigs must be fed; their food comes from the kitchen refuse of the Warsaw ghettos, from where Jan begins to rescue several Jews and provide them with a safe haven in the basement of his abode. In the middle of this Schindler’s Listset in a zoo, there’s Lutz (Daniel Brühl), a German zoologist, who is smitten with Antonina, and because of his powerful position as a Nazi officer, he gradually reveals that he is up to no good – not unlike his role in Inglorious Basterds (2009) – and that his suave charm is highly deceptive.

The film’s approach to the Holocaust is similar to Disney’s sanitisation of the Grimm Brothers’ fairy tales. Cute and fluffy rabbits and lion cubs abound, and even when the zoo is bombed and many animals begin to roam the streets, not one tiger or lion wreaks havoc or causes panic. That the bestiality of beasts can never surpass that of humans – in this case, the Nazis – is a no-brainer, but the film seems afraid to confront the horrors of the Holocaust. In one scene, set in April 1943, all the rescued Jews sit with the Zabinskis as the radio announces that the Warsaw ghetto has been liquidated. The Zabinskis’ son suddenly exclaims that it is snowing. Indeed, it looks rather appealing. He and Antonina step out verify this statement, only to discover that it is not snow, but ash from the ghetto that is being burnt. The engagement with the wonderful, sublime imagery of snow eschews every bit of sympathy, if not horror, that the incarceration should have or could have resulted in.

Certain scenes bring to mind not only Spielberg’s aforementioned drama, but also Sophie’s Choice (1982) and The Pianist (2002). The comparison, however, is not flattering. Chastain’s best interactions are not with humans, even in moments where her empathy is palpable, but with a baby elephant whose life she saves in the beginning of the film. However, the screenplay is too timid to fully bring forth the feeling of oppression and tension that Polanski’s film did. The film is – as is evident from the title – about Antonina. Chastain is utterly delightful to watch, but to my mind, it is Brühl’s character that comes close to exploring, even exposing, a shred of moral complexity. He is almost a cardboard cut-out of every Nazi character ever presented (he saves the exotic animals from the Warsaw Zoo and kills the rest – a symbolic extension of the purity of Aryans while the rest are treated as vermin) but is rescued by Antonina’s rejection of him, who, on her part, is traumatised by his advances and the way they threaten her marriage.

War comes home to them, literally, as the Nazis patrol their premises all day, but there is an insularity about the situation that strikes a jarring note. The Jews are not given a voice; not once do they articulate their experience at the ghettos. Even as they emerge from the garbage cans, they look clean. All the violence and grotesqueness is washed away.