Kaappaan plays a big game and is very commercial in nature. 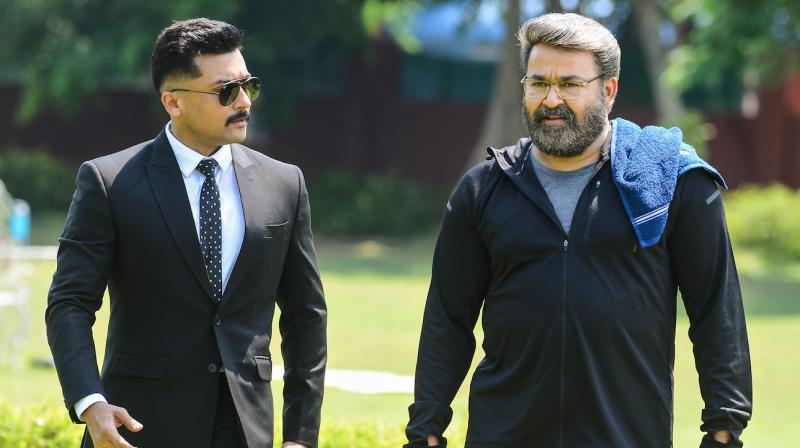 After more than half a decade break, KV Anand has collaborated with Suriya to make a loud entry. With Suriya helming the project while Mohanlal, Arya, Sayyeshaa, Boman Irani, Samuthirakani and co receiving major roles, there’s a lot at stake here.

The film follows the story of a special intelligence officer Kathir (Suriya), who is elevated as the head of security (SPG) for Prime Minister Chandrakanth Varma (Mohanlal).  Initially, you get the sense that Kathir might be the bad guy but it later becomes evident that he’s here to save the day. There’s this Mahadev (Boman Irani) the business tycoon, who indirectly controls the government. The movie then devolves into a mix of the agricultural and terrorism and how these elements interact.

When Chandrakanth is assassinated, his son Abhishek (Arya), a spoilt child, becomes the next PM. There was a chance for the film to move forward in an interesting angle, but instead, we are backtracked by commercial elements. Anjali (Sayyeshaa), the press secretary to PM and as Kathir’s lover diffuses any tension that is built up. And the portrayal of the prime minister with the urgent meetings and such seemed very unrealistic. Also, the fact that many in high positions learn about the terrorist attack from the media is unremarkable.

You can sense that the creator has put in a lot of effort to make this work. The connection between bio-terrorism and agriculture is convincing. It raises security issues that you’ve probably never thought about before. The plotline is very predictable. Eventually, as the film progresses, Suriya’s heroic moments fights back the unending unexciting interludes. He carries the movie through and through. Mohanlal’s veteran presence is nice, but his character is a letdown. Sayyeshaa’s character suffers from bad timing. The rest including Arya, Boman Irani, Samuthirakani have given decent performances in their limited roles. Chirag Jani who plays the assassin is okay.

MS Prabhu’s cinematography is brilliant and a major plus. Songs placement hampers the pace. There are some well-choreographed action scenes. Overall, Kaappaan plays a big game and is very commercial in nature. The inconsistent writing makes for an average viewing experience. Go for it to watch Suriya on screen.