Aadai is definitely worth watching for Amala Paul’s painstaking efforts and a newfangled story, which breaks the stereotypes. 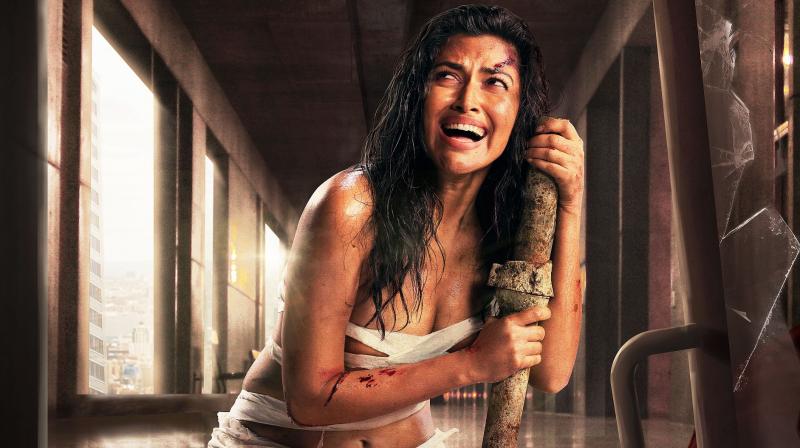 The film begins with an animated folklore as to how women from tribal community in the Travancore Maharaja regime in Kerala paid tax to cover their breast and how a rebel Nangeli who fought for them to get the freedom to wear the dress they want, ending her life in the process.

Fast Forward, we see young Kamini (Amala Paul), a brash, bold and carefree girl who does what she feels is right. She is addicted to betting. She even changes her name from Sudhandira Kodi to Kamini. She hosts a reality Prank show Thoppi on a TV channel with her team comprising of Jenny (Ramya Subramaniam), Vivek Prasanna and a couple of others. Due to a court order, the channel shifts from their present plush building to a new one and Kamini’s colleagues organise a rave party for her birthday at the vacant place. The whole night they get drunk and smoke up and everything goes wild. When Kamini wakes the next morning, she is in for a rude shock as she finds herself fully naked and alone. There’s not even a piece of paper in the huge office. Tired and with a sore head, she is unable to recollect what had happened the previous night. What follows is a series of hurdles and how Kamini comes out of her unimaginable situation.  In a way it reflects the slightly evil traits that she exhibits during her prank shows.

Kudos to Amala Paul for choosing an unconventional, bold and never seen before character in Tamil cinema and executing it with her impeccable performance. And with a universal theme of fear for naked-ness, Amala nails her panicky expressions, making it believable. With her nuanced act, she rises above the film’s story. Ramya in a meaty role is good, but vanishes post interval.

Director Rathnakumar touches upon several contemporary issues like taking a dig at K’town personalities with MeToo movement, NEET, TikTok, bad side of reality shows etc. The backstory, which reveals the person and her motive behind Kamini’s terrifying situation is a bit unconvincing. The preachy tone could have been avoided.

And the irony comes when the name of the character who gives Kamini ‘a taste of her own medicine’ is revealed towards the climax.

Aadai's music and background score by Pradeep’s Oorka Band work very well, pumping adrenaline rush when the screenplay demands. In a film like this where the heroine travels naked throughout the second half, cinematographer Vijay Karthik Kannan’s work is like walking on a tight rope and he has pulled it off brilliantly. Aadai is definitely worth watching for Amala Paul’s painstaking efforts and a newfangled story, which breaks the stereotypes.