The Crew movie review: A soap opera up in the air

Nikolai Lebedev’s The Crew is a film about the honour and duty that bind the crew of every airline. 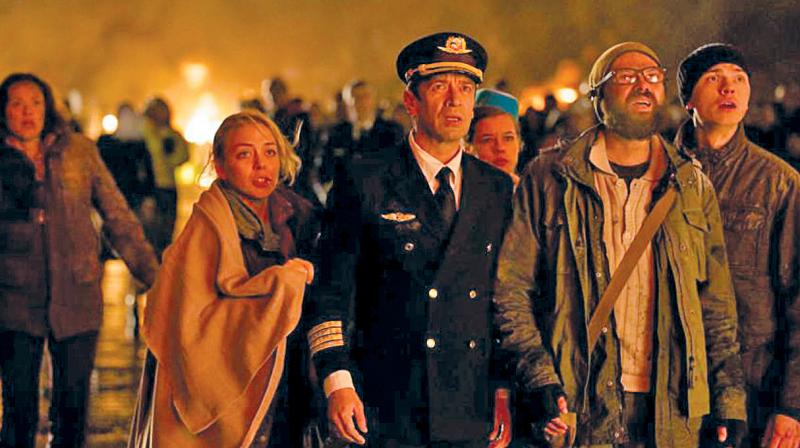 A still from the movie The Crew
Rating:

Nikolai Lebedev’s The Crew is a film about the honour and duty that bind the crew of every airline. With films such as Neerja and Sully still fresh in our memory, Russia’s two cents on the bravery of flight crews is not exactly a breath of fresh air.

The protagonist, Alexey Gushchin (Danila Kozlovsky), is a courageous and self-righteous pilot, who keeps getting fired from his job because of his proclivity to defy the chain of command and walk where his moral compass points. His sensitivity towards the injustice that prevails in the world, which ultimately denies many suffering souls an opportunity to get rescued from crisis-hit zones, causes him to get evicted first from the Russian border, then the Air Force, and then again, air transportation. Helped by his unnatural talent as a pilot and his father — a well-respected aircraft engineer — he is finally recruited as an apprentice pilot to Leonid Zinchenko (Vladimir Mashkov). For one entire hour, the film glosses over his flying skills as well as his budding romance with another pilot, Alexandra Kuzmina (Agne Grudyte).

The second half puts the flight crew to test when, on a rescue mission, they land on an island where a volcano is about to erupt. After thinking on their feet, they depart on two separate planes, one of which runs out of fuel mid-air. More heroics and daredevilry follow, which can put Rohit Shetty’s staple stunt of having one man straddle two cars to shame.

Watching this film does not feel very different from watching a telenovela: the camera zooms in to exaggerate emotions; violins strum in the background as soon as a character sheds a tear; there are unrelated, mindless minor characters; and sheer bad acting.

The film, however, for all its flaws, tries to comment on the nature of courage and selflessness that tends to clash with authority. Gushchin wants to transport toys to children in war-torn zones, but has to unload in the face of a major storm, although the plane also carries two brand new cars for elite politicians. In another instance, a big-shot on board the first class lights up cigarette and consequently gets into a brawl when Gushchin tells him that rules are rules. Gushchin, unsurprisingly, gets reprimanded. In scenes reminiscent of Clint Eastwood’s Sully, a committee sits to review the actions of our protagonists, overlooking the fact that they had just saved over two hundred passengers.

One scene that stands out is a conversation between Gushchin and his father on the nature of patriotism. Gushchin, an impulsive, petulant, but sensitive man, has a rather narrow idea of patriotism. His father corrects him: patriotism is not about idle babble or flag-waving, or doing heroic things, but about letting your country flourish. Our protagonists do become heroes, saviours, almost martyrs, but ultimately, it is the owner of the airline who rules the day. Bureaucracy wins, and their country, like every other in the world, does not flourish, the common citizen be damned.