The background score tries too hard to sound frightening, and as a result, only ends up making one laugh at the ridiculousness of it. 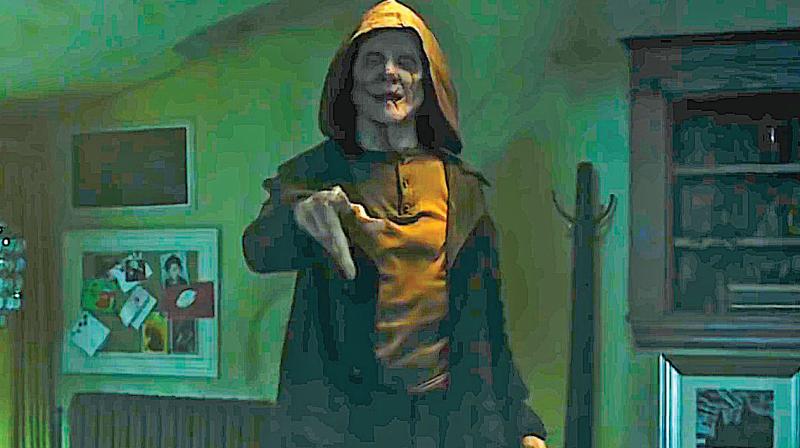 A still from the movie The Bye Bye Man
Rating:

Take it from someone who shies away from horror films: The Bye Bye Man is a cheap pastiche of perhaps every horror film — both bad and good — that has gone by, so much so that one may find oneself yawning, if not sleeping, through the downright predictable plot.

Three college students — Elliot (Douglas Smith), his girlfriend Sasha (Cressida Bonas), and his best friend John (Lucien Laviscount) — rent an old, creepy looking mansion situated within equally creepy woods, which (surprise! surprise!) turns out to be haunted. They find old furniture that bears the markings of those who suffered before — a nightstand ominously etched with the words “Don’t think it. Don’t say it.” But the film exposes everything in the same scene when the forbidden “it” is discovered to be “the Bye Bye Man”. Just the way one has to touch wet paint to ensure that it is indeed wet, the characters cannot help thinking about the Bye Bye Man as soon as they are told not to do the same. The titular character presents himself when people utter his name, and gains strength by inducing fear in the minds of these people, who then begin to hallucinate and, in their paranoia, resort to murder and/or suicide. Gimmicky leitmotifs such as the sound of flipping coins and growling hounds, and nightmares are employed to announce the arrival of the supernatural creature who resembles the Reaper, and is accompanied by a snarling dog, the CGI effects of which can make one wonder if this film was indeed released in 2017.

Most of the horrific action that takes place is a result of the paranoia that the Bye Bye Man induces in the characters. Elliot begins to get suspicious that his girlfriend and his best friend might be hooking up behind his back. John gets repulsed by a friend, Kim (Jenna Kanell), who comes to attend the house-warming party, but as a psychic (and a clichéd gothic brunette who only wears black), is aware of the resident spirit. Sharing any information about the Bye Bye Man with another person can spell doom; it spreads like a virus. Where else have we seen such originality of thought? The Ring (2002, Gore Verbinski) with its videotape; The Grudge (2004, Takashi Shimizu) with its haunted house that curses every stray visitor; even Jumanji (1995, Joe Johnston) with its board game that keeps one ensnared for decades.

The film has just a couple of jump-scare moments in the first half, and my middle-class chicken heart was in fact thankful for those moments for giving me my money’s worth since I had intended to watch a “horror” film. Faye Dunaway and Carrie- Anne Moss make cameos — the former as the aged wife of the man who was possessed by the Bye Bye Man in 1969 and did everything in his power to erase the traces of the Bye Bye Man (except stupidly carving out his name in the nightstand) before blowing up an entire family, and the latter as a policewoman trying to investigate the first death that has resulted since Elliot and Kim’s discovery.

Apart from these two, all the performances are consistently hammy. The background score tries too hard to sound frightening, and as a result, only ends up making one laugh at the ridiculousness of it. The mantra that is constantly chanted in the film, “Don’t think it, don’t say it” can safely have an addition: don’t watch it.