The pace of the film takes a beating courtesy the plot development, but the humour pretty much makes up for it. 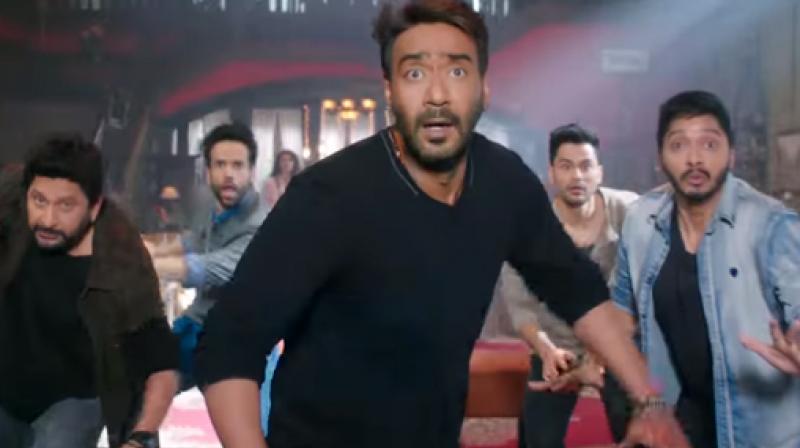 Rohit Shetty is no David Dhawan. The man is no Priyadarshan or Anees Bazmee either. But he's aware of his strengths and has evolved to be a supremely self-aware director.

'Golmaal Again', intendedly heavy on a 'plot,' has a background track for the protagonists, that had been hitherto unexplored.

Gopal (Ajay Devgn), Madhav (Arshad Warsi), Lucky (Tusshar Kapoor), Laxman (Kunal Kemmu) and Laxman (Shreyas Talpade) are kids who've grown up in an orphanage in Ooty, separated due to circumstances during their childhood, only to be reunited when their caretaker passes away, years later.

The film, a drastic change from its usual blatantly unabashed slapstick humour, tries to experiment with horror-comedy, a genre that's been in vogue for the longest time down south.

The very predictable twist at the interval notwithstanding, the humour is characteristically clean and effective.

However, much of it is courtesy the supporting cast, consisting of dependable names like Sanjay Mishra, Johnny Lever and Nana Patekar (in a delectable cameo).

The pace of the film takes a beating much courtesy the plot development, but the humour, howsoever intermittent and inconsistent, pretty much makes up for it.

Rohit Shetty might have had a misfire with his last directorial 'Dilwale', but he's bettered his most famous franchise with a film that betters its predecessors courtesy some decently smart writing. However, Ajay Devgn's ineptitude with comic timing has never been more apparent, with scenes specifically forced onto the script to cater to his action hero image and make up for his inadequacies with humour.

The film plummets every time the humour takes a backseat and the 'plot' and its twists come to the forefront. It doesn't help that Parineeti Chopra, Neil Nitin Mukesh and even Tabu disappoint, despite having consequential roles. The cinematography and unnecessarily amped CGI are borderline tacky.

The film, however, serves its purpose of being the quintessential festival release. The humour is well written and consistently effective. 'Golmaal Again' works predominantly, and surprisingly enough. But a fare for all seasons? One might have their doubts.