The Shashank Khaitan directorial might be a much anticipated film of the season, but it is nothing more than a launchpad for two star kids. 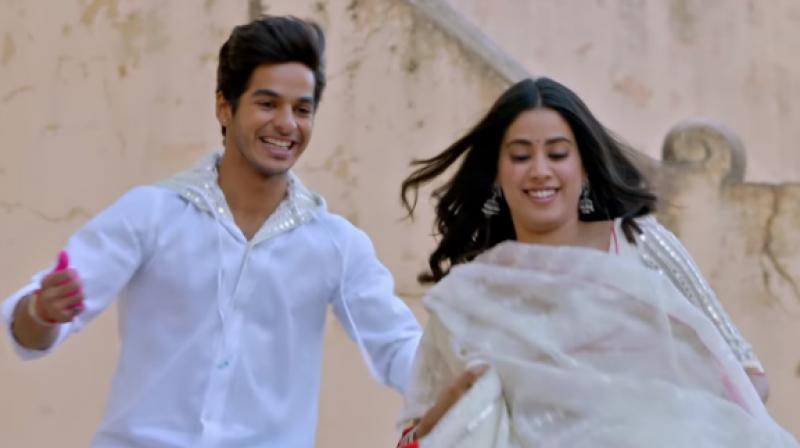 Ishaan Khatter and Janhvi Kapoor in a still from ‘Dhadak.’
Rating:

Set in the picturesque city of Udaipur, director Shashank Khaitan tries too hard to bring out the magic of Sairat with the fresh pairing of Janhvi and Ishaan but somehow fails to even woo. Keeping the commercial aspect alive, yes, Dhadak is nicely packaged, but the dragged screenplay will make you revisit '90s.

Madhukar (Ishaan), son of a dhaba owner falls in love with Parthavi (Janhvi Kapoor), daughter of a rich politician. With the obvious class disparity, their families aren’t in favour of their love, but the two run away and hereon begins the chase of vengeance against pure love.

Like Sairat, Dhadak will surprise you in bits and pieces, and I am definitely not giving spoilers for the ‘expected’ climax. The innocence of their first love is difficult to feel here especially in the intense scenes where Ishaan is doing most of the things and Janhvi is clearly overshadowed.

Remaking or adapting an existing screenplay is a big challenge for a director like Shashank, who has made easy-breezy cinema till date. Dealing with the issue of honour killing demands huge justice which he lacked. Keeping Sairat aside for a bit, Dhadak as an individual film isn’t gripping enough, especially in the first half.

Dhadak might face the wrath for promoting it exorbitantly considering its marginal substance. You might turn up at the theatre to experience a Karan Johar production or late Sridevi’s daughter’s debut film, but be prepared for a yawn fest.

The film didn’t even highlight the political conspiracy of Parthavi’s family. It was picked up to back up the story, but was left midway to shift the focus on Janhvi and Ishaan as an excuse.

Ishaan Khatter is truly a star. He simply draws enough attention towards him in every single frame. He is the true savior of this not so appealing remake. Ishaan is here to stay and soon might be a threat to his current contemporaries.

Janhvi Kapoor, a pretty face, has nothing more to her. Literally! However, she dances well and looks good in her ethnic costumes, but where’s the performance? Her breakdowns aren’t for real. She needs to work on her diction and dialogue delivery. Ashutosh Rana does a good job as an evil father.

Music by Ajay-Atul is fairly good. The very popular Zingaat song is visually stunning; even the title track is shot nicely in the most cliche Dharma manner.

Dhadak might be a much anticipated film of the season, but it is nothing more than a launchpad for Ishaan and Janhvi Kapoor. Rather watch Sairat for realistic cinema.