With many pluses, the film is worth a watch. 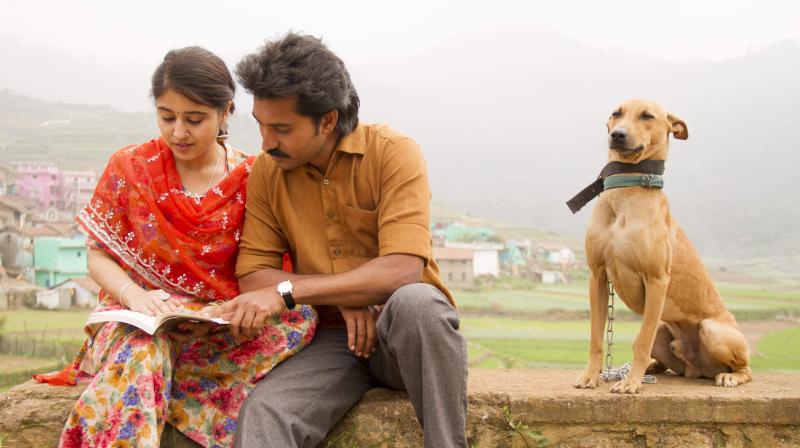 After the recent blockbuster 96, here is yet another film Mehandi Circus set in 90s where Isaignani Ilayaraja’s music propels the entire story. Apparently, national award winner Raju Murugan has penned the story and dialogues of Mehandi Circus for his brother Saravana Rajhendran, who debuts as the director for this period breezy romantic film.

The film opens in 2010 in Poomparai village in Kodaikanal with a middle aged Jeeva (Madampatti Rangaraj) who spends all his time boozing in the company of Ilayaraja’s classic 80s and 90s classy love songs and living in his own world. There enters a young girl Pooja (Nisha) who comes in search of Jeeva. She tells him that her mom Mehandi (Shweta Tripathi) is deathbed and wants to see him once.

Thus opens a flashback, and the love story of Jeeva who owns an audiocassette shop ‘Raja Geetham’ and here Raja’s songs play a major role in uniting lovers in the neighborhood. A circus troupe comes to the village. There, he meets Mehandi who does dare devil act and the showstopper in the circus. And it was love at first sight for Jeeva. After initial hesitation, Mehandi also reciprocates. However, Mehandi’s father (Sunny Charles) who runs the circus does not approve of their relationship and sets a dangerous test for Jeeva to have her. All the same, a caste obsessed Jeeva’s father Rajangam (Marimuthu) is dead against his son’s love. When the couple tries to elope with the help of the local pastor Amaldass(Vela Ramamurthy), fate has something else in store for them!

Popular Chef turned hero Madampatti Rangaraj has been aptly cast as the lead protagonist. Though he pulls off the role from the mid 20s to 40s covincingly, he still needs to hone his expressions. Bollywood girl Shweta Tripathi of Maasan fame looks pretty and scores with her natural performance.  And kudos to her for dubbing her own voice! Vela Ramamurthy in a comedy character shines every bit. Marimuthu and Sunny Charles are equally effective. Vigneshkanth succeeds in evoking laughter most part of it. Ilayaraja’s music adds lot of genuineness to 90s settings and the director has used it commendably. Raju Murugan’s dialogues are hilarious at the same time hard hitting with social relevance touching upon many issues including present-day politics.

The problem with the film is the director has not kept sufficient scenes to establish the intensity of love between the lead pair. Hence, we don’t really feel much for them when they are in trouble. Also, there are no real twists and turns to keep you hooked.

Technically, the film is strong with Selvakumar, the cinematographer leading the way. Visually, you are in for a treat. And music and background score by Sean Rolden are the high points of the film.  With many pluses, the film is worth a watch!