While the movie is able to pull off spectacle with stunning effect, especially in the Dussehra sequence, human drama falls short. 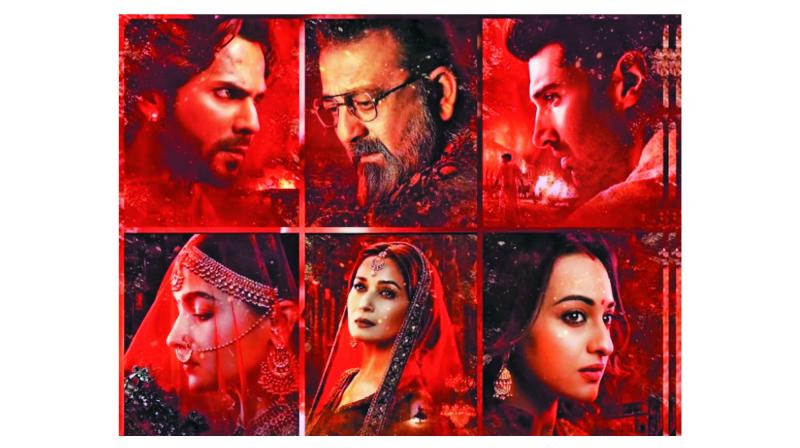 Zafar (Varun Dhawan), the lohar who makes sharp, deadly swords, arrives with his own song and a dance troupe.
Rating:

I love it when Bollywood goes all out to romance and seduce us by creating a lavish, large, fake world, fills it with larger-than-life characters who then scoop us up to partake in their heightened drama that inevitably leads to melodrama.

Writer-director Abhishek Varman’s Kalank, which has majestic, gorgeous sets sitting against an epic, historic backdrop — Angrezon ki gulam India is hurtling towards both, Independence and bloody Partition — intends to give us that big Bollywood’s engulfing jhappi. But his film doesn’t have the honesty of emotion or integrity of storytelling for it to feel either warm or sincere.

In his beautifully constructed world that conjures a rich nawabi past with lots of period detail and heavy, long dialogue in Urdu, dwell seven characters we are concerned with — the great sacrificing wife and her quiet, principled husband; the golden-hearted tawaif-philosopher and the rich man who wronged her; two mismatched lovers caught in the fault-lines of history, class and fate; and the villain.

While Kalank’s period setting is quite charming, complete with horse-driven buggies, an LP spinning to yield K.L. Sehgal, and characters swaddled in fine cloth that maketh gorgeous ensembles, in this grand, classic world the film’s characters and actors often feel small, diminutive.

While the movie is able to pull off spectacle with stunning effect, especially in the Dussehra sequence, human drama falls short.

And so it’s often left to cinematographer Binod Pradhan to use the art director’s creations and his swooping camera to add some heft and gravitas to scenes.

There’s a certain Bollywood mainstream cynicism, and laziness, to this sort of filmmaking where instead of being honest to their characters and stories, writers, directors often use filmy solutions from the template of Big Bollywood.

This results in an uneast effect at the end. While you will recall Kalank’s red-walled study room, the characters who sat or stood there, and the looming piece of tragic history, the human drama — faint, weak —  will disappear from your memory.

Circa 1946, Husnabad, on the outskirts of Lahore, the bahu of the Chaudhary parivar, Satya (Sonakshi Sinha), is at a doctor’s clinic, asking how much time she has left.

Meanwhile, in Rajputana, Roop (Alia Bhatt), a sweet, nubile girl-woman is skipping about in a lenhnga-choli chasing a kite, essentially to exhibit her free spirit and agility.

Given her impending departure, Satya has a plan to restore conjugal bliss in her husband’s life that involves Roop. But Roop doesn’t care for it much. However, on her “haan” rests the fate of her two younger sisters. So Roop comes up with a sharat, a condition that will seal many fates.

Dev Chaudhary (Aditya Roy Kapoor), son of Balraj Chaudhary (Sanjay Dutt), is a decent, vilayat-returned, kurta-clad dude who runs the Delhi Times newspaper and is staunchly anti-batwara. He believes in one mulk, one samaj, not Partition.

In Hira Mandi, the badnam galli of kothewaalis where women are “beautiful and easy”, resides the third one whose destiny will be controlled by Roop’s decision.

Zafar (Varun Dhawan), the lohar who makes sharp, deadly swords, arrives with his own song and a dance troupe.

When he is not working or sleeping around, Zafar is being angsty about his parentage and there is an exchange of looks which throws hints at where his anger may be directed at.

Zafar’s pal Ahmed (Kunal Khemu) is a pro-Partition Muslim League activist who is loathe to the idea of Hinduon ki gulami after centuries of Angrezon ki gulami.

He rides pillion on the fear of steel factories to recruit men for Jinnah’s call for Direct Action while Hindu families talk of moving to Hindu-majority parts of India.

A wedding takes place in depressing solemnity though it later yields one of the film’s cutest scenes.

The bridegroom offers the bride an honourable bed & breakfast arrangement, but no pyaar.

Roop, bored and irritated, decides that she wants to learn sangeet from Bahar Begum (Madhuri Dixit), Hira Mandi’s chief mujrewaali, and despite the threat to the Chaudhary parivar’s izzat, she gets what she wants.

Even as sad music is playing around Satya, Hira Mandi is all decked up for Dussehra, its favourite festival.

It’s here that the film pulls out all the stops to deliver a sequence that is absolutely stunning in its scale and detail, even if quite Balinese in its aesthetics.

The choreography of the rising blue Rams, the Garuda, the vanars play alongside Bahar Begun — singing in her kotha with its ceiling-to-floor chandeliers, ornate walls — who is a spectacle unto herself.

And then, as Ravan’s many heads burn, the star-crossed lovers meet.

This scene is the movie’s centrepiece, deserving a hearty applause.

Since Roop is educated, she finds herself a desk in her husband’s newspaper office and an assignment that takes her to a bullfight.

The CGI marvel, i.e. the bull, not conversant with the golden rules of Bollywood, pushes the hero off a cliff, unaware that desi heroes return from the dead, cliff kya cheez hai.

After two cute scenes and a confrontation between two exes, the movie inches towards the climax that is tense and made fabulously heady with the weight of history and the sharp, steely sound of betrayal.

It packs in the sadness of eternal separation of a nation, of people, of cities, of a shared culture, food, clothes, history, of generations spent together…

Kalank’s story is narrated by Roop. And if one were to get all technical and logical, one could ask how come she knew details of stuff that happened when she was not around. But that would mean looking at Bollywood, its stories and storytelling from outside, examining it minutely for flaws and silly, illogical things.

That’s not the Bollywood promise.

Bollywood offers a brief stay in a world where things are as we were told in our bachpan they will be.

No matter what may be going wrong in the world outside, here, in the hall, in this story on the screen, things won’t change. Here, love will triumph. And this, ladies and gentlemen, is the joy of Bollywood.

Those who are able to lose themselves to this, will enjoy Kalank. Others won’t.

In the world of Kalank, the significance, marquee value of stars can be judged by how they arrive. Alia Bhatt and Varun Dhawan arrive with their solo song and dance sequences, leading hundreds of dancing extras,  but the camera’s steady eye always on them.

Sad part is that Kalank’s songs are bad and barely register.

Madhuri Dixit also gets some solo numbers, but in the climatic Tabaah Ho Gaye song the choreography is so terrible and her dancing so shoddy that it’s painful watching the woman who, once upon a time, danced like a dream.

With Kalank, Abhishek Varman (who made 2 States in 2014) probably wanted to pull off a Pakeezah, or at least a significant “Muslim social” complete with women in shararas and dupatta-covered heads, but his film really is the bastard child of Kabhi Khushi Kabhi Gham, Dilwaale Dulhaniya… and, of course, Silsila, Kabhi Kabhi…

It’s in love with all things vintage — from soft muslin and mulmul to luxury furnishings, from big mohabbat to big drama.

In this world, when lovers meet, they are colour coordinated. But the long-winding dialogue in Urdu assigned to most belittle them rather than enlarging them, because while they may be efficient, as actors and personalities in this setting they dwarf. They do not have the majesty of, say, Rehman, Raaj Kumar, Meena Kumari…

That would require living a good part of life outside Bollywood.

Alia Bhatt is very charming and an exceptionally talented actress. She is able to hold many big scenes quite well and carries the film for most part.

But man, she can’t dance, and must not be made to. What she does when music plays could at best be described as bluff and bluster, not dance steps.

Varun Dhawan, as always, tries and is not bad. But in intense, dramatic scenes he pulls that same old muhje-zukam-hai face.

Kumar Khemu, who wears all the kajal he could find, is quite deliciously villainous.

Of course there’s a sadness to her character, but she wears that tragedy like a tightening noose not just around her neck, but the film’s neck as well.

Though she and Aditya Roy Kapoor look like they belong to the Chaudhary parivar, their chemistry is that of badi didi-chota bhai. Somewhere, right at the end, there’s a spark, but it dies out too soon.

Though Aditya doesn’t have many dialogues, he uses his quiet restrain rather effectively.

In Kalank, Dixit resides in a kotha that’s inspired in parts by Pakeezah. Madhuri still has a compelling presence and brings power to some scenes. But she is now increasingly resembling a Madame Tussauds version of herself, or, perhaps, a certain resident of Antilia in Mumbai.

She seems so much into preserving her wrinkle-less face that her expressions, her dance seem so unreal, facile, plastic almost.

I never thought I would say this about Madhuri, but I have to say exactly what Bahar Begum says about Roop’s singing, “Namak kam hai.”