My Birthday Song opens with a claustrophobic frame in the chamber of a doctor. 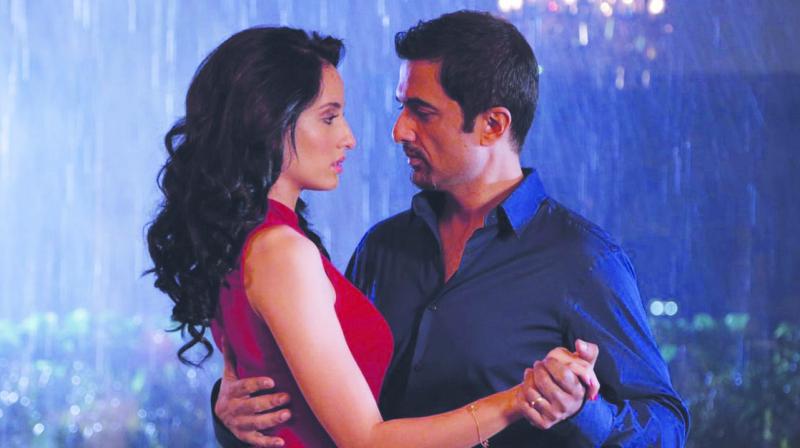 A still from the movie.
Rating:

It’s quite easy to make some sort of coherent head or tail of My Birthday Song if one were to just go over the scenes and recall the moment where guilt hit Rajiv Kaul (Sanjay Suri). Or why Kaul, the ad agency guy who has a sweet wife, a lovely farmhouse, is happy to cheat, loses it.

But unlike in several psychological thrillers, where that moment of revelation accompanies an almost audible, impressed-with-the-director’s-cleverness “aha”, here all you feel is exhausting irritation because the writer-director Samir Soni’s film is needlessly convoluted and so annoyingly pretentious that you want the whole thing to be bleeped out of your memory.

My Birthday Song opens with a claustrophobic frame in the chamber of a doctor. It’s been a year since Kaul’s 40th birthday and still, he tells her, he is unable to sleep.

The film then goes into flashback, to that rainy night in Delhi when Kaul’s 40th birthday party, that his wife Ritu (Zenia Starr) could not attend, was underway. The party was boring. His friends, the food, the conversation was boring him. Things perked up only when he spotted this young, slender, sexy thing in a tight dress.

Sandy (Nora Fatehi) is not really a person as written by Soni. She is a cliche, a banality. Like all temptresses, she stands alone and stares out of party, through the window, as if scanning the outside for something that would bore her a little less, all the while mentally swaying in admiration of her own hotness.

But then eyes lock.

And when Sandy feeds Kaul a slice of his birthday cake, her fingers move like slow, caressing wipers on his lips — a gesture that is suggestive enough for the two to make a chal-sex-karte-hain pact aankhon-aankhon mein.

Though she is a guest of a guest, she stays back. And as they get talking, it seems Sandy knows Kaul from before, but he can’t recall kab, kahan.

Soon they are in bed for some one-on-one action which she seems to be enjoying. But then she spots something that makes this whole going-down-on-each-other-business seem like a very bad idea. But before she can utter a word, things fall, glass shatters and an accident occurs.

Here on things get decidedly bizarre.

Next morning, to Kaul’s bafflement, the scene of action, with blood, shattered glass and more, simply ceases to exist, making him wonder if he imagined it all. There is no trace of Sandy or any hanky-panky. There are, however, clues that peck at Kaul, telling him that a very bad thing did happen last night.

But soon his birthday day begins again. Ritu calls to say she can’t make it, a friend calls to say he’s bringing a guest, Sandy, to Kaul’s birthday party, and then, Kaul, still baffled, rushes to tell Sandy not to come to the party.

But then the same accident occurs again…

Kaul’s life and the film are now in a hysterical loop, where every day is the same day, the day of his birthday, and it begins with a clean slate except for some reminders that jo dikhta hai woh satya nahin hai.

It’s not a bad plot for a psychological thriller. But under the guidance of Samir Soni, this thriller turns stupid pretty soon.

His film is not interested in any characters, only in what it thinks is a clever ploy to confuse the viewer and keep them guessing.

Each one — the husband, the wife, the temptress — is one-dimensional and mouth lines that come with the packaging of these cliche characters.

The temptress talks of cheating her way though NYU, the wife loses it on hearing of her husband’s latest frolic with another woman, and the husband is just staring at things — broken frame, dead girl, and the I-card he draws out of Sandy’s bag.

Given the scenario, it’s not fair to expect the actors to liven up the proceedings.

Nora Fatehi is pretty, and is stellar when she’s playing dead.

Soni, who has written and directed My Birthday Song, is so in love with his own creation that he wanted his presence to be felt throughout. So the doctor’s prescription pad we see in the beginning has S. Soni written on it. And he makes a fleeting appearance in a scene, running into a baffled Sanjay Suri.

Suri, a limited actor who seems very lost here, should have told him then and there, “Bhai, dimag ka dahi ho raha hai.”