It is an adventure film in which magical creatures have a crucial role to play. 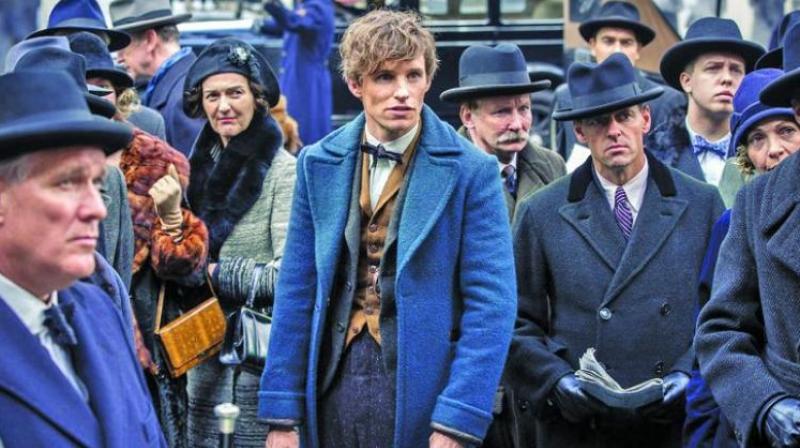 A still from the movie Fantastic Beasts and Where to Find Them
Rating:

For those who have voraciously read Harry Potter books, this year brought a colossal disappointment in the form of The Cursed Child. However, scripted by J.K. Rowling herself, Fantastic Beasts and Where to Find Them has enough to offer to help one get rid of the bitter aftertaste of the spin-off play. For the uninitiated, Fantastic Beasts is a textbook prescribed at Hogwarts. David Yates, who directed the last four Potter films, is helming the prequel franchise as well. Unlike the Bildungsroman that Harry Potter was, Fantastic Beasts is not about the portrait of the author as a young scientist. It is an adventure film in which magical creatures have a crucial role to play. Temporally and spatially removed from the world of Hogwarts, this film is set in New York in 1926, where Newt Scamander, a magizoologist from Britain makes a brief stopover, but in a mix-up, his suitcase containing magical creatures falls into the hands of Jacob Kowalski, a No-Maj (American for Muggle), who accidentally sets them loose upon the city. The trouble is compounded by tense relations between the magical and non-magical community on this side of the Atlantic.

The Magical Congress of the United States of America (MACUSA) has non-negotiable laws on the preservation of secrecy, for they are being persecuted by Second Salemers, a fanatical group devoted to witch-hunting. Newt Scamander and his friends are chased all over the city, for the magical creatures risk exposing the witches and wizards of New York to the No-Majs. But it’s not only these fantastic beasts who are wreaking a havoc; a darker, sinister force is at play which threatens everyone. Rowling does not make a departure from the themes of Harry Potter — love, tolerance and equality. Instead, they are more pronounced in Fantastic Beasts. The conflict between black, white, Asian communities is dissolved; the President of MACUSA is African American. The only outsider for the magical community is No-Maj; fears of miscegenation abound; one cannot even bring a No-Maj inside one’s house. Watching a film that is set 90 years before our present time, one wonders if it is a critique of the Nazi and Fascist ideologies that rose to power a decade later, or a reflection of the current state of events in the world. Perhaps it is both, which is even more distressing.

Scamander’s suitcase is a world unto itself. With the help of undetectable extension charm, Scamander creates a sanctuary for his magical creatures in the suitcase. As he takes Kowalski on a guided tour, we are shown how each beast is unique, and also uniquely misunderstood and feared, and thus killed by humans. Kowalski’s incredulity is our own, but he refuses to think of it as a dream. “I ain’t got the brains to think this up,” sums how marvellous Rowling’s imagination is, and gives us an idea of what to expect in the remaining four films in this series. It is slightly difficult to absorb the American-ness of this film. New rules and new terminology are offered by way of culture shock. Familiar names are thrown about in order to imbue a sense of being grounded within the same universe, but it is not enough to mention Dumbledore once in an interrogation, without context, and then let the matter drop. Another familiar character shows up, Gellert Grindelwald, and provides a precursor to what is to come in the next instalment.

Redmayne is affable as the socially awkward yet endearing Newt Scamander, and Colin Farrell and Dan Fogler deliver well in their supporting roles. Johnny Depp, as Grindelwald, is seriously miscast. Since the character had a minuscule part in the last of Potter films, this was an opportunity to etch him out fully. Depp, a household name and now in the news for all the wrong reasons, is a celebrity with enough fame to overshadow a character. And when the character in question is a friend-turned-foe of Albus Dumbledore, Warner Bros should have exercised discretion in casting a lesser-known actor instead of letting stardom take over. Most of the film is overwhelmed by extensive use of CGI, the plot of this caper seems a bit trite at times, but considering this is one-fifth of a new franchise, one hopes that better adventures will follow, with a profound insight into the Dumbledore-Grindelwald relationship.

Tags: fantastic beasts and where to find them, eddie redmayne, colin farrell