Half Girlfriend movie review: Music is the saving grace in this run-of-the-mill love story

The film will work only if you like to watch love that is not only mushy, but also cringe-worthy, all at once. 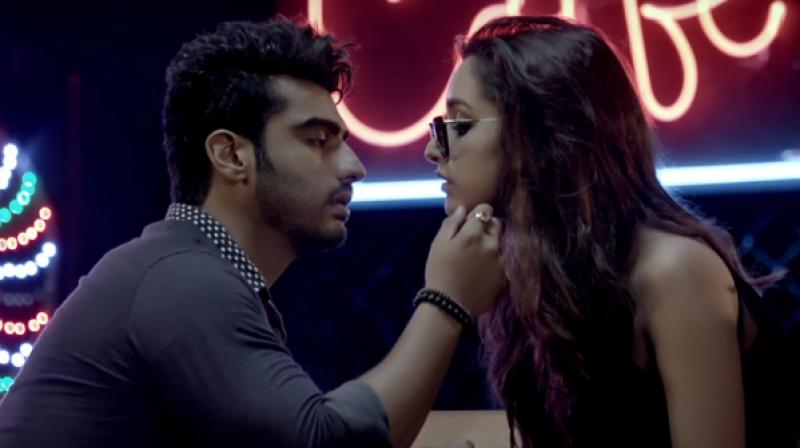 Arjun Kapoor and Shraddha Kapoor in a still from 'Half Girlfriend.'
Rating:

It must have felt good to writer-turned-producer Chetan Bhagat that he is lucky enough in transforming the characters of his books into reel life stories. But at the same time it feels terrible for the filmmakers who choose to make films based on his novels (Rajkumar Hirani being an exception, who adapted ‘Five Point Someone’ in ‘3 Idiots’). Director Mohit Suri, who is specialised in making sob tales (disasters), dares to adapt the author’s melodramatic novel ‘Half Girlfriend’ in his latest offering.

Madhav Jha (Arjun Kapoor), an ambitious guy from a small town in Bihar, India, moves to Delhi to an upmarket college. He meets Riya Somani (Shraddha Kapoor), a rich, fashionable but emotional girl. She has a dysfunctional family and aspires to become a singer in New York. The two bond over basketball matches and soon fall for each other but a big surprise (Rolf) awaits! Riya’s been married off to a dirt rich guy from the States. Soon after, Madhav moves back to Bihar.

Few years later, the two meet again in Patna, Bihar, incidentally, by that time Riya is single all over again for Madhav (as expected Rohan leaves her). Madhav’s mother Seema Biswas doesn’t approve a divorcee and Riya sacrifices her love and leaves India telling the biggest lie she could think of (she is dying of blood cancer). But our Indian heroes never lose hope for true love and guess what, the two meet again in New York and bingo! It’s climax here and that’s pretty much it. What? And they live happily ever after. Whoa!

The big question here is why Mohit Suri is so depressed in his life? His characters are either dying of some highly abused diseases on screen or have a sad ending. Be it ‘Aashiqui 2’, ‘Ek Villain’ or ‘Humari Adhuri Kahaani’, the most saleable thing during these releases were the boxes of tissues available in the market. He surely has potential to show happy romance on celluloid, then why does he continue making incomplete love stories every time. Oh! sorry ‘Half Girlfriend’ has a happy ending but it is a novel adaptation (Cut, copy and paste). Shot in and around exotic locations of New York, UN headquarters (only Bollywood film to be shot there), Delhi and Bihar, ‘Half Girlfriend’ is not as good as half of anything miserable you might have seen or experienced in your life. The dialogues are corny and screenplay is as good as Mills and Boon.

Wonder why Mohit wanted to make a film from page-to-page of the novel. The film is certainly not for the classes. Even the producers must have thought to get only youth to the theatres. The idea of a boy meets a girl, departs, and meets again, is the safest game to play with the psyche of college bunkers and Mohit has played smart with that. The film has every possible ingredient of a run-of-the-mill love story. But, if Mohit has to sustain in the business, he must challenge himself with something more interesting rather than making a tear jerker. The saving grace of the film could be its music. With two-three melodious tracks in the film over popcorn isn’t a bad idea to lounge in the multiplex.

Arjun Kapoor can’t act to save his life. He looks like this big piece of flesh roaming on the busy streets to find his love. A good actor could have spoken Hindi in a Bihari accent way better than him for sure (producers couldn’t afford to get him a tutor?) Barring his debut ‘Ishaqzaade’, Arjun has never managed to impress with his performances. However, Shraddha Kapoor does a fair job but in bits and pieces. Since she is Mohit Suri’s favourite so that could be the reason that she looked a little better than her previous films. Her teary eyes are bearable but her voice is itchy. Her laughter is cute but expressions are awful! The one who steals the show in the film is Vikrant Messy who has an amazing grip on the Bihari accent. He is actually a lot better than both Arjun and Shraddha. Seema Biswas has a striking resemblance with her character in ‘Vivaah’ and has done justice to her part in this sinking ship. Rhea Chakraborty is good in her cameo.

On the whole, ‘Half Girlfriend’ is too bad a film for human eyes. Unless, of course, you still like to watch love that is not only mushy, but also cringe-worthy, all at once. The film is definitely not worth your ticket price.