Beyond The Clouds movie review: Miserable show of misery

Ishaan Khatter, who comes with a baggage to run a legacy of a film family outshines in his debut performance. 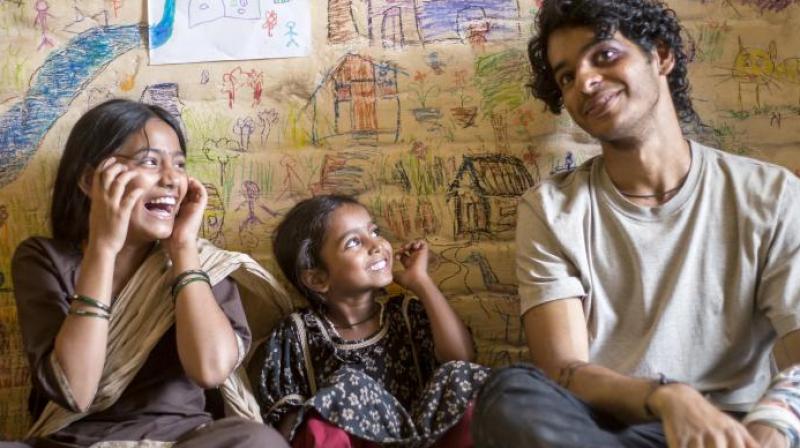 A still from 'Beyond The Clouds'.
Rating:

Unlike our most of the Bollywood films which have palatial sets, fancy foreign locations, big star cast and extensive promotions backing them till their calculative release dates, away from all this, Iranian filmmaker Majid Majidi brings a simple tale of two siblings and their respective miseries. Noted filmmaker, who helmed films like ‘Childrens Of Heaven’ and ‘The Songs Of Sparrow’ in the past, ‘Beyond The Clouds’ (BTC) is his first Hindi language directorial feature set in the Mumbai slums.

Aamir (Ishaan Khatter), a small time drug dealer aspires to become super rich someday while her elder sister Tara (Malavika Mohanan) runs her living with secret prostitution. A drug raid brings Aamir close to Tara and the two lead a miserable life when Tara goes behind the bars for hitting her lusty lover in the neighbourhood. How far Aamir will go to save her sister Tara and bring her back to normal life is what BTC comprises of.

Director Majid Majidi has a certain way of writing his films but with his first Hindi film, he clearly forgets the audience that seek pace and conflict in a film which doesn’t have an extraordinary plot. However, he beautifully touches certain emotions in each of his characters but they are enjoyable in parts. First half is passable but second half is completely scattered. The film seems to lose its purpose at various places. Majidi has brilliantly knit the roles of Aamir and Tara. despite having dark shades, both of them have a brighter side.

Few scenes where Aamir supports the family of her sister’s culprit are high on emotions. While Tara’s unconditional bond with jail inmate and her little kid is heart wrenching. There are few nuances especially in the climax which might melt your heart but they are far away from perfection. The film is shot in the slums of Mumbai through a vivid filter. The background score doesn’t gather much attention as well. BTC is a niche film and perhaps the director’s weakest so far.

Ishaan Khatter, who comes with a baggage to run a legacy of a film family outshines in his debut performance. He has come prepared to sustain here for long. His ease while facing the camera is just too good. At such a young age, it is commendable to see him taking a big risk by debuting with a film like this. Unlike, his obvious grand commercial debut, Ishaan proves his mettle in a film which pushed him as an actor. His breakdown and anger will give you goosebumps. He looks raw, rustic and real.

Malavika Mohanan, who has a body of work down South, is not so good. She is watchable but not upto the mark. Though, newcomers should be given a fair chance to prove themselves for right after their debuts. Picking right films and getting apt roles are destined. Considering their debut, Ishaan and Malavika, both tried their best to perform. Tannishtha Chattejee has made her career out of playing a poor and miserable woman but courtesy her great acting skills that she is still visible often on screen. Rest of them are just average.

BTC is certainly not a masterpiece of Majid Majidi. It is just another regular story of orphan siblings and their problematic lives. Avoid the pace and plot, the film is high on emotions.

Watch 'Beyond The Clouds' trailer here: