Watch Tumhari Sulu for Kaul and Balan. They make the cutest maddier couple. 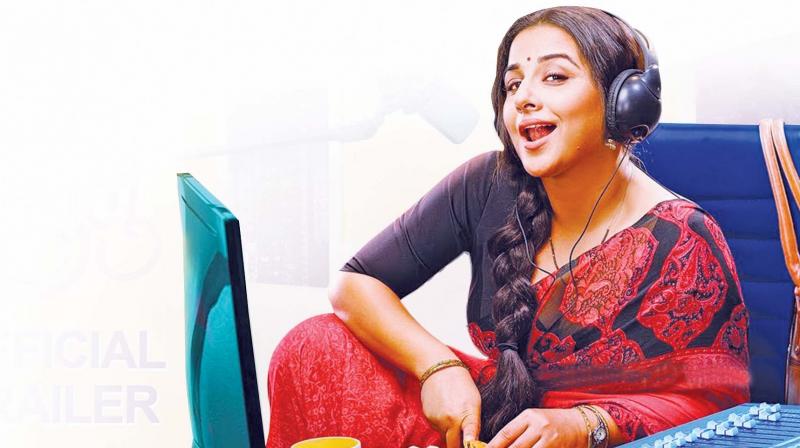 Its charm, warmth lies in the small details that make up a marriage, in ways a couple negotiates life, in characters who are fresh, different and being played by excellent actors.

Their coupledom is lovely — Ashok carries Sulochana’s handbag and cheers her on as she runs and comes second in the lemon-spoon race.

But Ashok’s car is marked by a large L, and the TV set mounted on the wall of their livingroom is dead despite Ashok’s daily threatening phone calls to the dealer to take him to the consumer court.

Sulochana and Pranav make fun of Ashok, and when Sulochana is irritated, she takes it out on Pranav. That usually happens when her family, i.e. Sulu’s father and her twin elder sisters — let’s call them ‘‘Hain-na didi? Haan didi.” — arrive, essentially to criticise her, remind her that she didn’t clear her 12th class, and that whatever she may be thinking, planning, it won’t work.

When they leave, Sulu looks longingly at the air hostesses next door and poses with her purse while talking on a mobile phone.

Sulu wants to do something, anything.

One day, after winning a pressure cooker in a Radio Wow! contest, she uses the persuasive charm of a housewife who wants to do something, be someone to get an audition to be an RJ.

Sulu is self-assured and self-aware. Her courage, her belief in herself and her love for life — ‘‘Mujhe sab cheez mein maza aata hai,’’ she tells Maria — and husband Ashok who is lovingly, sweetly devoted to her make the first half of the film an absolute delight.

The moments that make up their grihasti — like sex, or lack of it, in a marriage that’s comfortable, romantic and intimate — are heartwarming and believable because this equation is their own, born out of who they are as individuals.

She thinks herself his equal, on the look out for an opportunity. And he treats her thus.

These bits fill in colours in these characters, giving them dimensions, a life, a personality.

And yet this couple, after interval, descends into the same melodrama we’ve seen over and over.

Soon after Sulu takes up a job that takes her away from home at night and makes her so sleepy in the mornings that she is unable to pack Ashok and Pranav’s tiffin boxes and see them off, she starts feeling guilty.

But she loves her job. Every moment of it.

And because she loves it and sees nothing wrong in fielding randy phone calls from strangers, as if on cue, the Bollywood cosmos conspires to punish her.

Ashok starts facing problems and humiliation at work while Sulu is being celebrated at her office.

As his own career goes down, Ashok's irritation with her goes up. He now disapproves of her job, and ‘‘Sulu bhabhi ke rangeen sapke’’ irk him.

Final straw is that cliched phone call from Pranav’s school

Jealous husband of a housewife trying to grow wings — a bit of Abhimaan and some traces of English Vinglish. It’s the same trajectory. Why? How come, when Sulu and Ashok are so different from Subir and Uma, Shashi and Satish?

Why do so many Bollywood films that begin well, end up using the same filmy clichés in the second half? Why don’t writers, directors look deeper into their characters and see, think where they may actually, naturally go?

The sappy melodrama in the film's second half bored me and, worse, it came all too soon.

Tumhari Sulu celebrates the sexy radio show, but then almost immediately ignores it. As if uneasy with its morality, it gives us no randy talk. All we get are two phone calls in the 140 min long film, one of which is emotionally powerful but very sanskari.

The film’s screenplay is at times convoluted, leaving plot jumps unexplained or confusing. Like the end.

But the power of Vidya Balan and Manav Kaul’s performances make you almost forget or want to ignore these glitches.

Balan as Sulu, dressed in salwar-suits with oblong patches on the side, and Kaul as Ashok in his pink uniform (my gentle bow to the dress designer), embrace their roles with love. They are naturally, beautifully Mr & Mrs Ashok.

Balan can turn on the heat and up a scene's emotional wattage with a look. She is insanely expressive and invests Sulu with all her warmth.

Neha Dhupia is both — good and very annoying. She has a strange patronising edge to all that she does. The twin sisters very, very good.

Watch Tumhari Sulu for Kaul and Balan. They make the cutest maddier couple.