If not for Sharan, the walking experience would have been more tiring and the audience might have suffered. 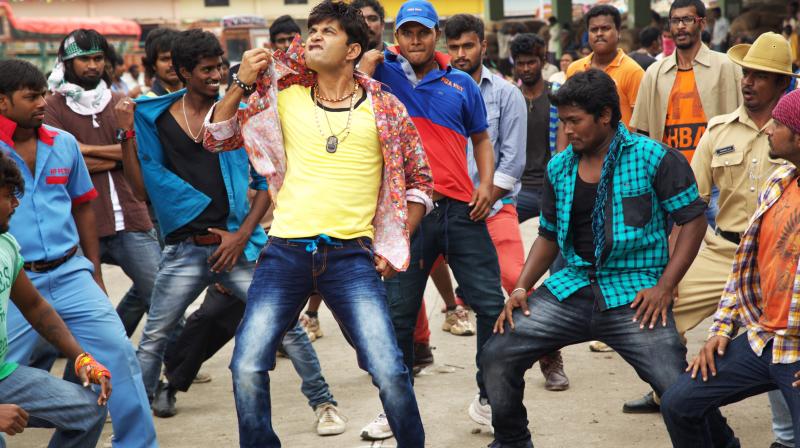 A still from 'Nataraja Service'.
Rating:

After all the attention which included a song, and then the publicity over demonetised notes which went awfully wrong, Nataraja is finally here and so is the 'walk the talk'! ‘Nataraja Service’ refers to one of the most commonly used slangs when someone has no other option but to walk to reach his/her destination. With actor Sharan in the lead, the walk was obviously meant to be accompanied with comedy attached to unusual twists and turns right till the end.

It is a simple plot which revolves around the two – one a petty thief (Sharan as Nataraja) and another is the beautiful but ill-omened girl (Mayuri as Sahana). The peg of the story is when fate brings them back again for the second time in a more complicated situation, which involves robbery and the girl being chased by a few who desperately want to kill her.

If not for Sharan, the walking experience would have been more tiring and the audience might have suffered from sleep walking syndrome. Though the walk starts with a peppy number in which the versatile Ravishankar shows off his dancing skills and his perfect expressions, the rest of the journey is rather boring packed with rare comedy punches. The protagonist whose best till date is stealing milk packets, later gets embroiled in a bank robbery of Rs 1 crore!

On the other hand, the ill-omened girl finally comes across a guy who is determined to marry her despite knowing all her past. The day he proposes her, he survives a deadly road accident, and goes to coma. By now, the pain is excruciating due to the unfunny walk and one could only wish for a lift straight to the climax. Though not up to the mark, it might still attract some satisfactory customers who have a liking for these kinds of services too!