It is purely a one time watch which has a few odd hilarious dialogues and some great performances but no storyline to it. 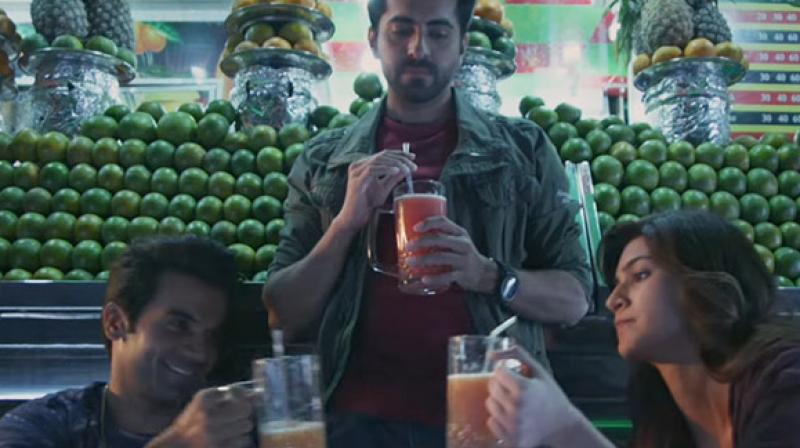 One film old female director Ashwini Iyer Tiwari became an overnight popular storyteller with Nil Battey Sannata, that dealt with the education system of girls in northern India. Her knack for showing small town people and their issues is commendable, but again banking unconditionally on her with just one film isn't justified either. Ashwini brings yet another small town flavoured film Bareilly Ki Barfi, but this time with a clichéd formula of a love triangle.

Bitti Mishra (Kriti Sanon) stays in Bareily and is the only daughter of her parents Pankaj Tripathi and Seema Pahwa. She is a modern, fearless and flamboyant girl, who believes in breaking societal norms. Chirag (Ayushmann Khurrana), a small time local writer, secretly admires Bitti and keeps writing his feelings in a book which Bitti coincidentally reads and soon after, she falls for him but things turn upside down when Chirag plants his best friend Pritam (Rajkummar Rao) as the original writer. Who gets Bitti in the end is what the film all about.

Ashwini clearly wanted to make a love triangle set in the small town with comic punches. The film is highly inspired by the romantic cult of our times, like Saajan, that featured Madhuri Dixit, Sanjay Dutt and Salman Khan. The plot of the film is not even an inch different from it but this film stands out with its comical elements.

The film also reminds of Kunal Kohli's directorial debut Mujhse Dosti Karoge where Hrithik Roshan mistakes his true love Rani Mukerji with the vivacious Kareena Kapoor Khan. The subject has been done to death but Ashwini and her team try hard to play around with the treatment, but to no avail. Written by her director-husband Nitesh Tiwari, the film is enjoyable, but in parts, especially in the first half, where Ashwini has taken much time to build her characters. However, the film picks up its pace in the second half but it's too late by then. The climax of the film is so predictable that one could easily guess who will get the girl in the end. Although, the trailer of the film looked quite appealing, the film fails to build on it. It is watchable, though one must not expect a Tanu Weds Manu or Dum Laga Ke Haisha, which belonged to similar settings.

The music of the film is passable, except for the song Aabra Ka Dabra which is peppy enough to groove to.

Kriti Sanon is seen in such a deglammed role for the first time in her career. Three films old, Kriti is good with her act and the UP dialect, but somehow is a misfit for the film. She is too urban and fashionable for a film set in Bareily. Unfortunately, she also doesn't pass off as Pankaj and Seema's daughter. Ayushmann is pretty much a veteran when it comes to playing a desirable boy from a small city. He is apt but the one who steals the show is definitely Rajkummar Rao. He proves with every film that he is a brilliant actor and can overshadow any actor in the frame. His transition from a shy introvert to a rowdy guy is the selling point of the film. Pankaj Tripathi and Seema Pahwa are the saving grace of this sinking ship. The two just light up the screen.

Bareilly Ki Barfi is purely a one time watch which has a few odd hilarious dialogues and some great performances but no storyline to it. It is certainly a light hearted film which is not as good as it promised to be.