Juan becomes a father figure to Little and like every parent, strives to be just good enough. 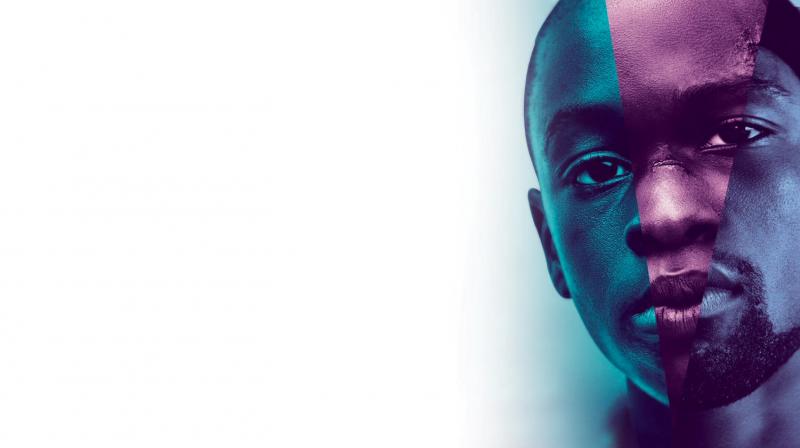 A still from the movie Moonlight
Rating:

In less than 15 minutes, Moonlight unfolds to reveal a group of young black boys, huddled together to play American football. Mozart’s Vesperae Solennes is rudely interrupted by the blaring horn of a train passing nearby; as the camera pans away we see that the ball is really a wad of newspapers. The boys gang up on the most vulnerable player — our protagonist — the tiniest and the easiest person to pin down. The instinct to hunt him down on account of his non-masculine behaviour, and the poverty that became the lot of the black community in 1980s Miami post-riots is distilled in this seemingly innocent, ordinary game of football. What follows, however, is more memorable in its sensuality in the way it kindles a fire at the touching of two bodies. Arm in arm, cheek against neck — two 11-year-olds wrestling, tussling on the grass — not with an aim to injure, but to prove toughness to the object of desire.

Barry Jenkins’ Moonlight follows a simple narrative structure to tell the story of Chiron Harris coming to terms with his black, gay identity. We see him as Little (Alex Hibbert) — the way he is perceived by the world because of his stature; as Chiron (Ashton Sanders) — him beginning to take cognisance of his sexuality; and as Black (an achingly vulnerable Trevante Rhodes) — trying to affect the persona of a gangster, reluctantly subsumed under the idea of what a black man should be.

The strongest operative feature of the film is the gaze. Juan (Mahershala Ali) parks his car to meet a fellow drug supplier. He furtively looks across his shoulder; the camera revolves with him twice — a complete 720 degrees — to take in his view. Police incarcerating blacks simply because of their race is not a recent phenomenon. He must look out. Little looks on with apprehension, but seeks comfort. He sees a mother in Teresa (Janelle Monae), but does not recognise the mother at home; she is distant, long gone. His first moment of self-recognition comes after wrestling with Kevin, the first time he fully returns someone’s gaze.

His swimming lesson with Juan, very baptismal in its imagery, is perhaps the most iconic moment. “Trust me, I got you,” says Juan, as he holds his head and helps him stay afloat. For once, Little feels free, is a kid. For once, he has a parental figure to lighten the burden of his inner struggle. But Moonlight remains, for a large part, silent. It flows like a quiet, visual poetry, slow yet nimble in its cadence. Little/Chiron/Black deems it unnecessary to string words together to fashion an overt chain of experience. The overwhelming joy of swimming is not expressed, not even with a nod, but is correctly understood. And dialogue is dispensed with in Black’s reunion with Kevin (Andre Holland). The longing in Black’s eyes belies his long-honed macho exterior — strong biceps, gold front teeth and flashy car. Moonlight looks for joy in simple, humane acts, which reinforce that the depth of human interaction must go beyond a phone call or a message. Life is worth living when there is someone who understands you, who hears what you do not say. It is about cooking a meal for someone. Little bonds with Teresa over the dinner she prepares with affection. In her nurture, he finds a mother who does not exist spiritually in Paula. Driving from Atlanta to Miami is worth the effort when you get to break bread with an old friend.

Juan becomes a father figure to Little and like every parent, strives to be just good enough. As with Little/Chiron/Black, we see in Juan, too, a conflict with regard to his black masculinity — a tussle between the need to rule the streets, peddling drugs, and an instinctive longing to raise this boy as his own son. How tough must one be in order to be man enough? In a single scene, Juan falls from grace; Little’s question, “Am I a faggot?” elicits a warm, sympathetic consolation, just what any child grappling with his identity would want to hear. But a follow-up with “Do you sell drugs? My mama does drugs, right?” instantly undoes Juan. Jenkins’ dips his paintbrush in the ink of tenderness, which often runs dry when it comes to painting black gangsters “from da hood” in standard Hollywood features. It is the same tenderness that pulls Chiron towards the ocean, to be one with it. Only with Kevin can he find a release for his emotions, and when that release comes, it is not expressed through gratuitous sex scenes. One hand clutches the sands of Miami shore in the throes of passion; the other hand wipes away the evidence of that encounter on the sand, leaving behind a landmark, however ephemeral, to celebrate the beauty of two souls uniting under moonlight.