Rogue One: A Star Wars Story movie review— Revenge, politics & a mission to save the universe

Most of the characterisation remains sketchy, but the spectacle more than makes up for it. 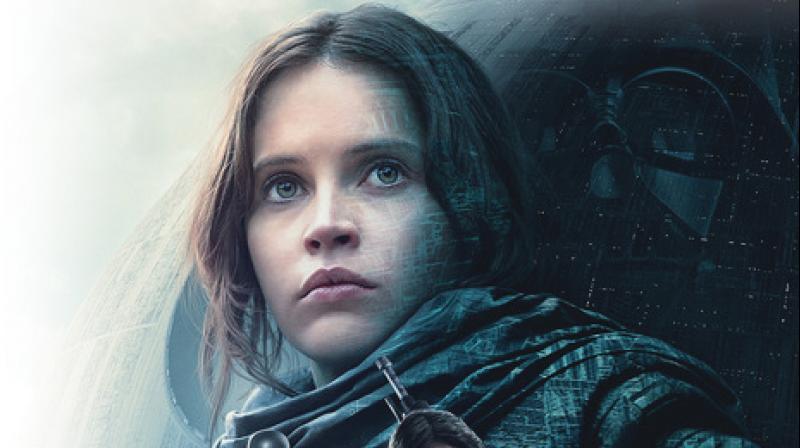 A still from the movie Rogue One: A Star Wars Story
Rating:

Gareth Edwards’ Rogue One: A Star Wars Story is the first in a series of spin-off/anthology films about the Star Wars universe. Galen Erso (Mads Mikkelsen), Imperial research scientist is forced to work on the Death Star, a space station which can destroy planets, by Orson Krennic (Ben Mendelsohn). Galen’s only child, Jyn (Felicity Jones) goes into hiding to escape slavery at the hands of Krennic. Fifteen years later, she is freed from Imperial clutches by the Rebellion. They need her assistance to track down her father and kill him before the Death Star is successfully built. Jyn goes to Jedha with Rebel Officer Cassian Andor and his droid K-2SO, and is reunited with Clone Wars veteran Saw Gerrera, her old mentor. She is shown a hologram of Galen, from which she learns that he had deliberately planted a flaw in the design of the Death Star, and it behoves her now to steal the plans to the Death Star and prevent large-scale cosmic catastrophes.

This space opera also doubles, no, triples up as a family revenge drama and a political allegory. This is the most racially diverse and inclusive film in the franchise where the protagonist is a woman. We have Chirrut Imwe, a blind warrior played by Chinese actor, Donnie Yen, and Bodhi Rook, essayed by Riz Ahmed. This is also a dark film which does not shy away from killing central characters. The droid K-2SO provides moments of comic relief. In a scene where Jyn and Cassian voice their concern about not surviving in space, K-2 drily remarks, “I will.” Such comforting thoughts.

Rogue One serves as a political allegory and is significant in our contemporary times. The world is polarised between left and right-thinking factions — not merely the powers that be, but the ordinary public refuses, or at least finds it difficult to traverse a middle path as well. Social media is flooded with opinions on every issue, and an apolitical approach is anathema.

In comes Jyn, who declares, “I do not have the luxury of a political opinion.” She has suffered, and suffered unjustly. She understands that the war-torn world cannot be understood in simple binaries of good and evil. Hence, the Rebellion, the desire to topple the Empire.

Most of the characterisation remains sketchy, but the spectacle more than makes up for it.

There are fancy weapons deployed to drill holes in spaceships which then easily slide and collapse. Besides the hundreds of CGI-created spaceships which engage in a battle in the final act, the solidity of human-to-human combat is not compromised.

The only issue is the background score which never stops playing. I understand that this is an epic space opera, but a moment of quiet to take in the marvel would have been welcome.