Stone’s and Gosling’s dancing is endearingly imperfect, their singing haunting and melancholic, and their chemistry, palpable. 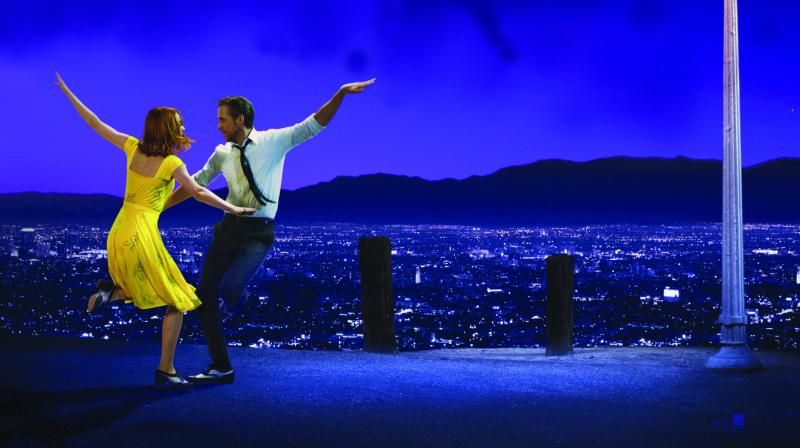 A still from the movie La La Land
Rating:

The words “la la land” are used to describe the fanciful, frivolous world of Los Angeles. It is also a euphemism for being out of touch with reality. Both the definitions appropriately justify the title of Damien Chazelle’s latest venture. Mia Dolan (Emma Stone), an aspiring actress, and Sebastian Wilder (Ryan Gosling), a jazz pianist, repeatedly run into each other in LA, fall in love, and help each other pursue their dreams, which later begins to test their relationship.

Chazelle’s Los Angeles is not the Los Angeles of a huge Hollywood sign, or of Malibu beach, or of celebrity mansions and condominiums. Before anything else, the first word to appear on the screen is “Cinemascope”. The first song of the film, Another Day of Sun, is shot in a single take in a traffic jam on a flyover. The camera zooms out to reveal a hundred dancers, and the flyover, seemingly endless. A Lovely Night, the stills from which have inspired all the posters of the film, canvases the myriad colours of the sky at dusk. As the lyrics of one song put it, it is “sunset inside a frame”. Chazelle shoots the film in widescreen to offer the audience a glimpse at how big, how vast the city is. We meet Mia and Sebastian in a coffee shop on Warner Bros. lot, in jazz clubs, strolling through studios, in theatres and in an observatory that includes the high-point of the film — a dream-like sequence among stars — a metaphor for their elated, euphoric state as they fall in love.

La La Land is neatly divided into chapters by seasons that mirror their emotions: winter brings failure for both at professional fronts, spring shows signs of a budding romance, by summer, their love is in full bloom. The film touches gold in the way it manages to wed a very escapist, very surrealistic genre of the musical to a heart-breaking reality of life: What should one do when ambition gets in the way of love, or vice-versa? What should one do when, in spite of giving it your all, your dream remains unfulfilled — choose the easy way out and be a sell-out in the guise of becoming a grown-up? Sebastian’s sister, Laura (Rosemary DeWitt), chastises him for neglecting his unpaid bills. Truth gets in the way of “romantic” ideas — the walls of Sebastian’s tiny apartment show signs of seepage, the Grace Kelly wallpaper in Mia’s bedroom is taken off after several unsuccessful auditions. They gradually begin to get in touch with reality.

Much has already been said and written about the grand visual spectacle that this film is, and rightly so, but Chazelle does not forego the tiny details. The song Someone in the Crowd directly succeeds the scene wherein Mia, rejected from an audition, shares an elevator with other red-heads. Planetarium is a treat for sore eyes, but certain actions lend an emotional centre, a heart to all the song and dance. Searching for parked car as an excuse to talk a walk together, gingerly holding hands in a movie theatre after trying to deny sparks between themselves, the bedroom bathed in pink light in moments of tenderness, and the dining table in green hues as things begin to go awry. In spite of the grandeur, the dialogues never sound lofty or corny.

In an interview with Entertainment Weekly, Chazelle remarked on the similarities between La La Land and Whiplash (2014) that “they’re both about the struggle of being an artist and reconciling your dreams with the need to be human. La La Land is just much less angry about it.” For me, it bears quite a few similarities with Woody Allen’s Midnight in Paris (2011) in that both are nostalgic about the jazz age, there is a preoccupation with Parisian glamour, the characters are frustrated at being traditionalists in a future-oriented world where one worships everything but values nothing, and the reconciliation of the present with the past necessitates conflict and compromise, but yields something new every time.

Emma Stone achingly conveys through her eyes all the turmoil that Mia is going through. It is refreshing to see her shed her gregarious persona and essay a less verbose character. When Sebastian joins a band which is less jazz and more pop because he is struggling to make ends meet, we see Mia’s face bathed in blue. It is an instant, unadulterated bewilderment in response to her beloved’s decision to discard his dreams. Stone’s and Gosling’s dancing is endearingly imperfect, their singing haunting and melancholic, and their chemistry, palpable. Justin Hurwitz’s music fits every mood like a glove. Terence Fletcher would be happy to note that everything about this film has just the right tempo. Nothing has shone so brightly in a long, long time.