Will Smith is mostly seen with his jaw tightened, refusing to utter his daughter’s name or address the cause of her death. 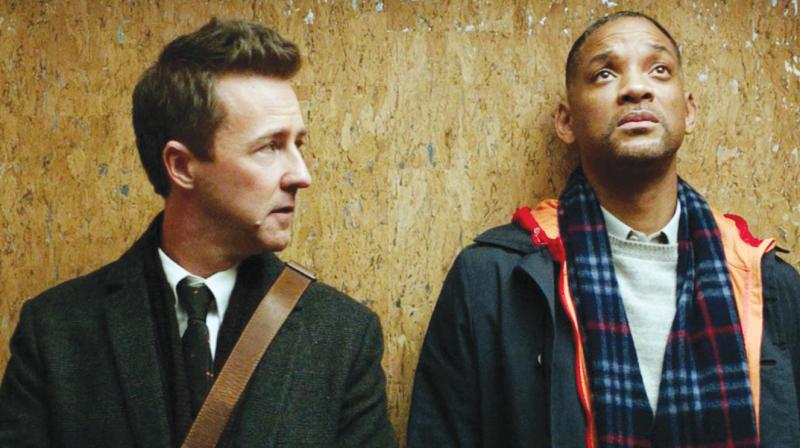 A still from the movie Collateral Beauty
Rating:

My first response after watching the trailer of Collateral Beauty was to count the number of Oscar winners and nominees in this stellar ensemble. Second was to try and make sense of the title of the film. “Collateral” and “beauty” are familiar words; I thought that perhaps I would understand the meaning after watching the film. I was disappointed on both counts — the actors are ornamental, and the title pompous and meaningless in this film.

Collateral Beauty is a vapid, emotionally manipulative melodrama that tries hard to compensate for its sorry excuse for a storyline by huddling together A-listers from both the sides of the Atlantic. The film opens with Howard (Will Smith), an adman, giving a speech to his employees about the three abstractions of life — love, time, and death. In his words, “We long for love, we are always running out of time, and we fear death.” These abstractions define our life and connect humanity. It all seems rather profound until the next scene, which takes place three years later. Howard’s six-year-old daughter has passed away. In his bereavement, he has become a mere shadow of his former self. He no longer cares about work, does not eat, and does not talk to anybody. Instead, he sets up hundreds of dominoes elaborately, only to watch them fall. His bleeding business begins to worry his friends and colleagues — Claire (Kate Winslet), Whit (Edward Norton), and Simon (Michael Pena). They are also concerned about his mental state of being, on which rests the future of the company.

Howard, in his grief, writes angry letters addressed to the three abstractions, about how the death of his daughter could have been avoided if he had been chosen instead, how time was not on his daughter’s side, how it all spelled the end of love. So far, so good. But Allan Loeb’s script meanders to include the background of Howard’s three friends. Simon has cancer, Claire wants a baby and Whit’s philandering has led to his divorce. Interestingly, the woman who catches him cheating is now hired to spy on Howard. Thus the friends get to know of his letters, which are considered lunatic and therapeutic alternately. They hatch a plan to hire three actors Brigitte (Helen Mirren), Aimee (Keira Knightley), and Raffi (Jacob Latimore) to personify death, love, and time, respectively, and confront Howard about how he needs to come to terms with his daughter’s death. There are echoes of Charles Dickens’ A Christmas Carol here. The film is even set in New York during Christmas holidays. But how a film can reduce the theme of loss and bereavement to kitsch is beyond comprehension.

Brigitte thinks of this opportunity as her big moment, Raffi is in it for money. They, along with the three friends, have no scruples trying to make Howard look insane. Part of their plan is make these personified abstractions visible only to him. Aimee alone harbours doubt. This drives Howard to seek group therapy amongst other bereaved parents, led by Madeleine (Naomie Harris) who, too, has lost a 6-year old daughter.

Will Smith is mostly seen with his jaw tightened, refusing to utter his daughter’s name or address the cause of her death. Everyone else in the film, including Mirren and Norton, try their best to look sincere, but when they mouth lines such as, “Time, you are a dead tissue that won’t decompose,” and “He is reaching out for answers to the cosmos,” one cannot help but cringe. The absurd, logic-defying, and frankly unnecessary plot-twist cracks the thin ice this film was already treading on. Watching this film is akin to hearing the sound of nails on a chalkboard. One can only wish for it to stop.