Despicable Me 3 movie review: The villains save the day

The film is enjoyable, but forgettable; amusing, but not profound. 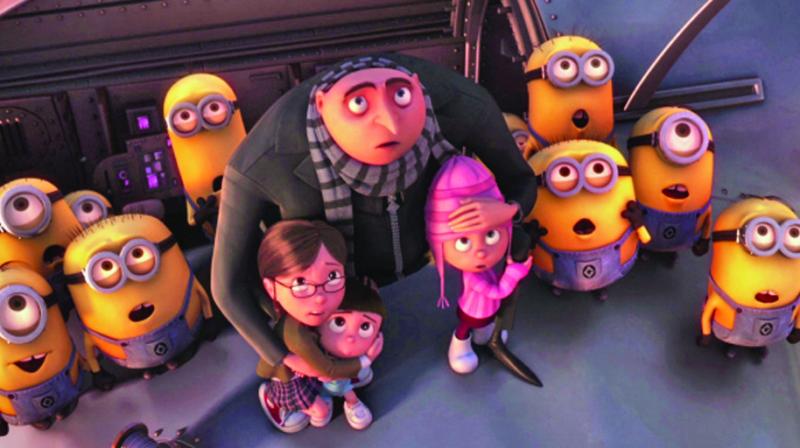 In a heist scene, Gru and his twin brother Dru, dressed in black and white bodysuits respectively, topple over each other, yoking like Siamese twins, like yin and yang. One is a reformed super-villain, a family man, who cannot provide enough after giving up his nefarious ways. The other leads a double life; he runs a hugely successful pig farm, but dreams of carrying on his family tradition of villainy. Both are united in their disappointment in themselves and their feeling of being complete failures.

The film begins with Gru and Lucy (Kristen Wiig) getting fired from their jobs after they fail to catch Balthazar Bratt (Trey Parker). Their adopted daughters – Margo, Edith, and Agnes – reassure them that all will be well, but the Minions are distraught beyond belief. They have no use for Gru, for he has left the days of villainy behind, and Dr Nefario has frozen himself in an ice block with one of his own inventions. They turn mutinous and leave Gru to fend for themselves, as they walk all around the city looking for a sense of purpose. At this point, Gru learns of the existence of his long-lost twin brother who, as a part of their parents’ divorce deal, grew up with their father.

As the family arrives at the fictitious country of Fredonia, they find a cooler, more cheerful version of Gru in his brother. What’s worse, he even has luscious blonde hair that Gru, with his baldness, can only envy. But all insecurities get dissolved when Dru reveals his secret lair with latest weapons and gadgets. In their quest to return to villainous life, they decide to steal the world’s biggest diamond from the antagonist of the film, Bratt, an 80s TV star who has failed to break character, and in his choice of outfit, pays homage to that decade’s most iconic figures – George Michael and Michael Jackson. He is bitter about Hollywood not continuing to produce his TV show, and thus, wants to literally blow the town up using bubble gum.

Gru and Dru’s adventures are intercut with Lucy’s bonding time with her three daughters who are not yet ready to call her ‘mom’. She tries to juggle the roles of good cop and bad cop, with some input from 12-year old Margo, as Agnes drags Edith on her unicorn hunt. It is heartening to watch both Lucy and Gru try to do the best of their abilities to make life easy for their children, even as they struggle to devise mechanisms to help them come to terms with the realities of life. For instance, Agnes mistakes a one-horned goat for a fluffy unicorn and brings her home, and it breaks Gru’s heart to burst her bubble. Lucy shows her kickass side when she stands up for Margo as she gets followed by a young lad who is besotted with her to the extent of proclaiming her hand in marriage.

The stars of the film, however, like its predecessors, are the Minions (whose own prequel film was a snooze-fest). Their antics are outlandish, slapstick, cartoonish and laugh-out-loud worthy. This franchise has never claimed to be intelligent or thought-provoking the way Pixar films are. It will do anything to induce laughter in every scene, so here we have the Minions parodying prison gangs when they land up in a jail for gatecrashing a reality TV contest. Their scenes are accompanied by songs by Pharrell Williams, which are more foot-tapping than ‘The Happy Song’.

The film is enjoyable, but forgettable; amusing, but not profound. In a scene where Gru and Dru arrive outside Bratt’s island tower, Gru takes charge while ordering Dru to sit and wait for him. The latter objects to being a silent spectator to all the fun and defies his brother’s orders. But this is exactly what is expected of the audience – sit through the film and enjoy the madness of these cartoons.