Raid wants to repair and energise our faith in the Indian sarkar and its attendant babus. 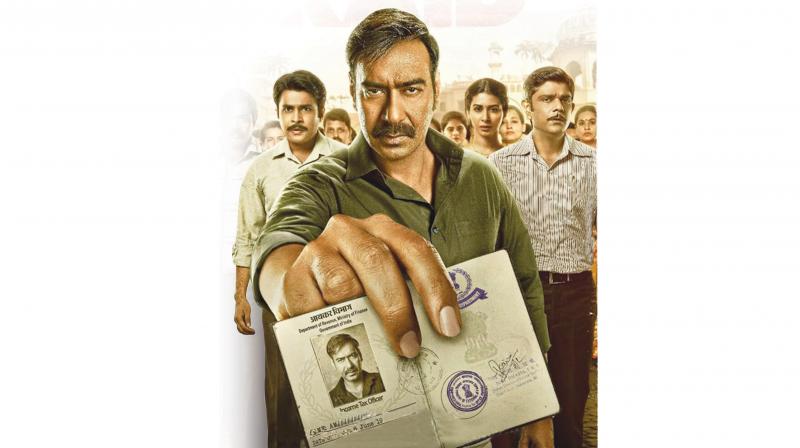 A still from 'Raid'.
Rating:

Raid, written by Ritesh Shah and directed by Raj Kumar Gupta, is yet another Mera Bharat Mahan procedural we are being treated to a lot these days.

Its story is commonplace, plot linear, and purpose base.

The movie exists at two levels. At one it’s a tableau created to gussy up the superstar, at another it is in the service of a cause. Raid wants to repair and energise our faith in the Indian sarkar and its attendant babus.

That Gupta — who had written and directed No One Killed Jessica in 2011, an angry wail of despair at a rotten system that cowers in front of the powerful and batters all threats to their prosperity — has jumped over the fence and is now singing paeans to the same system tells us something significant.

It tells the story of commercial Hindi cinema’s spinelessness, of a film industry and some of its stars who are desperate to toddy up to what they think is the dominant mood of the nation and the powers that be. That the superstar who is holding the banner of Mera Bharat Mahan here is Ajay Devgn is hardly revelatory. It’s now expected.

Ajay Devgn and Akshay Kumar take turns to concoct and present a rosy, mythical version of Incredible India that is just one honest, determined man away from becoming a reality. The only saving grace is that the PM at the helm in Raid is a certain lady in cotton saris, and not a certain gent in designer linen kurtas.

As usual, he’s presented as most superstars are these days — in meaningless, little chunks. First we get a shot of his wristwatch, then a shot of the forearm, as if to acclimatise us before unleashing the awesomeness of the whole.

The film’s next 20 minutes, which feel like 80, are spent in establishing his main character traits.

The income-tax search and seizure officer is not just fiercely honest, but is so overcome by his honesty that he talks of little else.

In this character-defining segment, Amay walks into a boots-only angrezon ke zamane ka club in a chappal and, when stopped, talks about being an honest officer who is too tired to go home to change and too cussed about rules and regulations to accept the manager’s apologetic plea ki “aapki chappal sar-aankhon par”.

After considerable negotiations, shoes are procured and Amay insists on paying for it.

Once inside, he opens his own small bottle of smelly rum to show off again what an upright officer he is.

That Amay loves doing this in the presence of very important people establishes another trait — that he is fearless and buland in his determination.

But let’s pause here and ponder the absurdity of this exhibition of honesty.

I wondered if, for example, having to attend some posh dinner, Amay also carries on his person some hors d’oeuvres, a main course with some boiled rice, and two pieces of jalebi? Or is his honesty restricted to not drinking another man’s booze?

I wondered because Amay, you see, doesn’t wear his honesty on his sleeve. He carries it on his person like a sharp whip, always handy and ready to lacerate one and all, while delivering a sermon with such fake modesty that it often finds itself ablaze.

Next we get a love song with his wife to establish what a virile, romantic and fun husband he is. Malini, when not giving Amay naughty come-hither ones, worries that his imandari will take his jaan.

Next he meets his team, which includes compromised officer Lalan Sudhir and young inspector Abhishek Tripathi and again finds an opportunity to take out his honesty whip and beat everyone with it. This time he does it while shoving a copy of that fabulous magazine, Dharmyug, where he’s on the cover.

Obviously word about this honest, upright offer gets around and he starts getting tips about one particular entity — Tauji, as the MP Rameshwar Singh (Saurabh Shukla), is lovingly called in the area.

When he has enough info, Amay hugs his wife and heads to Tauji’s haveli, the White House, with a search warrant.

There, between insults and threats from Tauji and expressions of shock from the gathered family, he explains how the raid will be conducted in the most tedious and plodding a manner.

But thereafter the film picks up thanks to Tauji’s boasts and taunts, and his own family politics.

As Amay and his entourage of officers go through mounds of fodder and gobar, mattresses and rice jars, pump out water from the well, dismantle the puja ghar and deprives the bahus of their gold jewels in search of `420 crore, Tauji’s chest keeps swelling more.

They find nothing, not a single unaccounted rupee. Till Ammaji appears.

That’s when, in scenes reminiscent of raid raj and demonetisation, we see Tauji deflate and the games the corrupt play.

Its story is a mishmash of several income-tax raids we’ve followed with voyeuristic glee over the years.

There’s been talk of the film’s plot being inspired by the 1981 income-tax raid on businessman and Congress MLA Sardar Inder Singh in Kanpur when 90 tax officials, under the protection of 200 police officers, spent 18 hours looking for kala dhan. Or, perhaps, the 1989 raid on the factories and homes of two industrialists — paper mill owner Harish Chhabra and jewellery dealer Chitranjan Swarup. Despite the presence of police, a mob allegedly attacked the 88 I-T officers. Or the income-tax raid at Bhai Thakur’s office and home in Mumbai.

Whatever. Raid takes bits from all of these and is a decent enough film. The problem is what the problem usually is with Bollywood movies that have a star at its centre.

Raid is so focused on creating scenes where the star can shine, and chamkile dialogue that do jai-jai-kar of the star, that it compromises other characters that held promise, and even the story.

Though Raid has a very impressive ensemble of actors who could have really enlivened the proceedings, most are reduced to shining light at some aspect of the star.

Though each character has a nice outline, they are not allowed to come alive. Including, sadly, Saurabh Shukla. His evil had potential that never gets realised.

It’s to the credit of the actors that despite this they stay with you long after the film is over.

According to Hindu mythology, Krishna was a composite of 16 gun, 16 superlative attributes. Ram had 12, and Buddha 10.

Ajay Devgn’s Amay showcases over the span of the film that he is satyavadi (truth itself), believes in nyaya (justice), is nirapeksha (impartial), niraskata (detachment) and aparchitta (invincible).

That’s 11 properties, which puts him one rung below Bhagwan Ram, but one up on Buddha.

Given that, where’s the possibility of lightness? Laceration is lajmi.

Given his godly connect, the conceit and pride of honest Amay can’t be a simple state of being. It has to be exhibited at every given opportunity with a sanctimony and self-love that will either force others to wilt with shame or throw up.

Thus it’s no surprise that Ajay Devgn is perennially ready to dash to the mount to deliver his I’m-so-honest sermon with a smug half-smile and eyes oh-so-exhausted by their own goodness.

But that he does so even when it comes to food really upset me.

In the second half of the film, Amay’s chipku biwi arrives with tiffin carries at the venue of the most secret, high-profile raid — “Mujhe pata hai aap inka khana nahin khaoge,” she says.

If only she had looked inside.

The food of the raidees — hot rice, dal and jalebis served in lovely peetal thalis on a long dinning table — looked so yum that I would have sat down next to Ammaji if anyone had asked.

Anna ka anadar, as my mother used to say, is the biggest paap. And that rule applies to all. Krishna, Buddha and Bollywood gods.