The film is not really about Babloo the sick dog either. 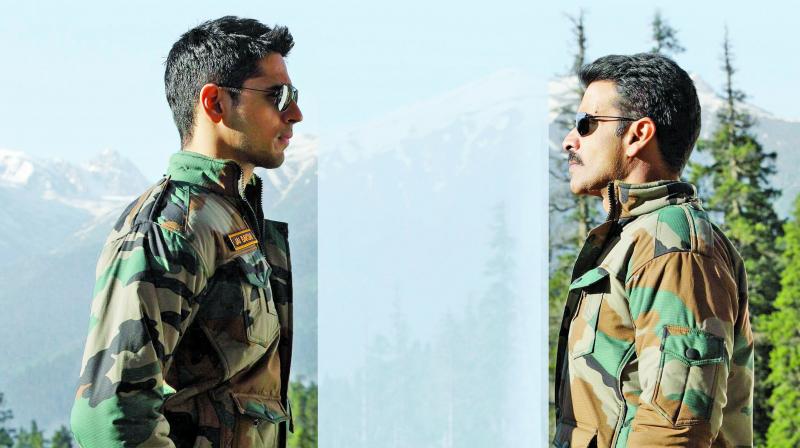 As per the recent economic aiyaary of Pradhan Mantri Modiji, writer-director Neeraj Pandey is gainfully employed as far as his latest film is concerned. During his two-hour-forty-minute film, he successfully manages to turn our functional brains into runny batter and then deep-fries it all into many crispy pakodas.

Agar aap soch rahe hain what aiyaary means, then let me save you some money and long spells of shifting listlessly in cinema seats. An Arabic word, it means cunning, craftiness, the ultimate trickery. And here it’s a title bestowed upon Col. Abhay Singh (Manoj Bajpayee) by militants in the Valley because he, we are told, is a master of disguises who won’t be killed. We witness one rather inept attempt to off him.

But Neeraj Pandey’s film is not about that. That’s just a minor sidelight, unlike the major sidelight about Babloo the sick dog from Colaba, which, at some rather belated point in the film, takes centrestage and walks the film to its climax.

The film is not really about Babloo the sick dog either.

It’s about many sick but powerful dogs who are gnawing at the great institution that is the Indian Army from inside and outside. And it’s about some not-so-top dogs who are in sluggish pursuit to save the Army from dishonour and besti.

Let me try and explain.

Army Chief (Vikram Gokhale) set up a hush-hush mission of seven officers, led by Col. Abhay Singh, to do stuff that’s so covert that it’s kept a secret from us as well. One of the secret seven, Maj. Jai Bakshi (Sidharth Malhotra), goes rogue and is now threatening to compromise others. Babloo the sick dog holds the clue as to why.

All we know of the secret seven is that in Cairo, despite having the orderly produce vitamin ki golis when asked to give bandook ki golis, Abhay is able to shoot a man. Who that was, or what bad-bad thing he did we know not. All we know is that he was taklu, had a mean expression and we see him pass something to another man. The handing over was shifty, so we must assume that it was not a shagun ka lifafa.

Meanwhile, rogue Jai is tossing Rs 10 coins in the air to take critical decisions — for example, to do desh bhakti or become desh drohi.

His decision splits the world of Aiyaary into two. In Group A, which is the bad guys ka group, the link-chain goes like this: Maj. Jai has been engaged by Lt. Col. Gurinder Singh (Retd.) who works for ex-Army guy Mukesh Kapoor (Adil Hussain). Kapoor, a big arms dealer in London, is the CEO of Armour Inc. and rather close to some Czech arms people who are trying to push some weapons to the Indian Army.

Jai is assigned to eavesdrop and record incriminating stuff, and he does that with the help of IT whiz Sonia (Rakul Preet Singh), a civilian he’s sweet on. He has also parked a cranky old man and Babloo the sick dog in Seema Lodge, Pahadganj, where the only interesting thing is the receptionist.

Group B is the good group and is led by the Army Chief who is offered bribe to push the Czech deal through. If he doesn’t, Gurinder promises to expose his secret mission of seven, along with their links to Mossad, CIA, KGB and other such.

Now, I would have imagined that this would be good for the reputation of the Indian Army, but apparently not.

So the Army Chief asks Col. Abhay to fix this mess.

The raksha mantriji seems to be on the Army Chief’s side. But you never know with mantrijis.

Whether you, I and Col. Abhay think Jai is a desh drohi is not important. What’s important is that by going rogue he is able to unearth the story of Babloo the sick dog recovering in a plot in Colaba, Mumbai, where a six-floor under construction building magically grows 31 floors tall.

Which group wins and which one loses rests almost entirely on the good judgment of journalist Amna. Will she do the right thing and put republic before TRPs, or will she ditch desh for sansani tamasha?

This needlessly convoluted story of corruption in the Indian Army is told in a manner that made me want to go out for a stroll, order a paan, chat with the paanwala about Nirav Modi’s dost-yaar and then return to my seat hoping that someone has done something.

Jai is still playing with pen drives and headphones. Kapoor the arms dealer is staring at a see-through screen created by the CGI team. Suspenseful music is playing. Members of Group B are still trying to locate Jai, while Group A is still keen on carrying out its smear campaign against the Army Chief. In between shots of sarkari cars and the South Block, people are dashing to and from airports and yet the film is going nowhere.

Aiyaary’s plot is like a game of musical chairs where characters walk around in a circle again and again till one chair, one character is pulled out, and then the rest begin again… round and round the same circle...

At some point, eventually, Abhay and Jai find themselves staring at each other, and the one who is being called a desh drohi delivers a lecture on how people in power are making pakodas of desh ki izzat and selling them outside sarkari daftars, without once mentioning that he has pocketed Rs 10 crore. Bhai wah!

This sort of stupidity and tacky writing-direction is commonplace in Aiyaary.

Guns are handed over and brandished openly, and taklu in Cairo, while dying, pokes our Colonel in the nose. Like, literally. I swear. No kidding.

Also, the big arms dealer hires an assassin who shoots pretty much everyone in the frame except the man he was hired to kill.

Aiyaary has so many talented actors — Manoj Bajpayee, Kumud Mishra, Naseeruddin Shah, Anupam Kher, Adil Hussain, Vikram Gokhale — but none, except Bajpayee, are given anything worth their time. Yet they try their best to pull off stupid scenes with terrible lines.

Pretty boy Sidharth Malhotra is good in family dramas, but terrible in other films.

In films like Aiyaary, he should just smile at us in close-up and, once in a while, do happy danci-danci. Isse jayada ki umeed rakhna bewakoofi hai.

The only fun, memorable thing in Aiyaary were two dialogues. One by Abhay about parking and the other by his wife.

Early in the film, she hands their toddler to him and then walks away saying, “Ghar pe raha karo. Sab poochte hain itna late kyun hua.”

The film should have thrown a tantrum and refused to go helter-skelter with Abhay, and just stayed put at his home with his wife.