One trip to Las Vegas with a cousin, Ambar, with whom she doesn’t have a particularly warm bond, throws her off-course and changes her life. 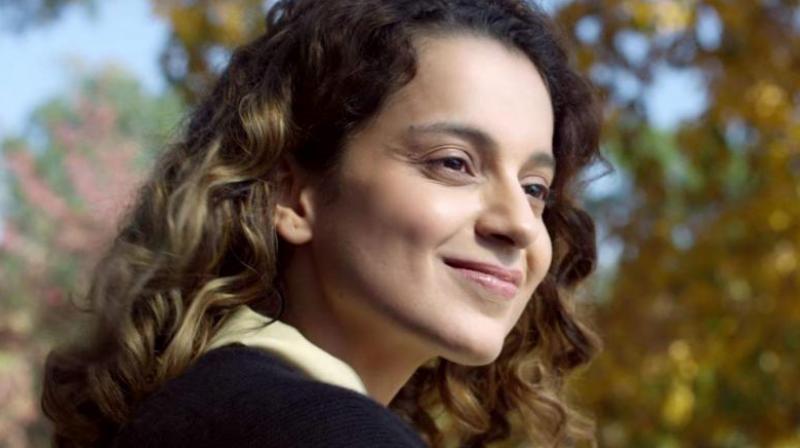 A still from movie Simran
Rating:

It’s been a few hours since I watched Simran and I’m still quite baffled. I can’t figure what the film is about or why it was made apart from the fact that it’s a Rs 30 crore showcase for Kangana Ranaut to flex her acting and stardom muscles.

It’s fascinating watching Ms Ranaut. She’s so expressive, so free, so unencumbered by the Hamesha Diva Dikho manual that most top female stars adhere to. Ms Ranaut is not scared of looking bad or sounding terrible. She is fearless.

But, she’s also been repeating herself. Since Tanu Weds Manu (2011), Ms Ranaut has played the motor-mouth bindas babe — slightly spunky before and very besharam after two-three pegs - several times over. Queen included. So while I was impressed, I was also mildly bored by her predictability here. With the film itself I was really irritated.

Simran tells a strangely disjointed story with enough sparks and scenes to tell us that it could have been something better, something more meaningful and less baffling. The fact that it’s directed by Hansal Mehta, who made the fabulous Shahid, is very disturbing.

What happens to Indian directors when they crossover, especially from high-brow art to fun-&-faltu commercial films?  Hansal chala hans ki chaal, I’m tempted to say. But in this case, if the drip-feed of gossip stories are to be believed, Ms Ranaut directed most of Simran, and she did it a disservice.

Simran is the story of a 30-year-old divorced woman, Praful Patel (Kangana Ranaut), who lives with her parents in Atlanta, Georgia, works a dead-end job, and has been saving up money to be able to buy her own house.

One trip to Las Vegas with a cousin, Ambar, with whom she doesn’t have a particularly warm bond, throws her off-course and changes her life. A drunken round at the jua table taps into her latent talents as a rather brazen juari, and soon she’s a restless, almost compulsive criminal.

Her triggers are clichés. There’s the mingy father (played by Hiten Kumar), who is forever talking about money, her shaadi, how much he has done for his family,
how much everything costs. And then there’s the debt she owes to a set of scary firangis.

Small gestures, comments, the spring in her step are like tiny dots that try to come together to create an interesting character: Praful is a cheesy but bold flirt — keen on sex, but only with protection and without strings. Praful is not a pushover, but she is insanely stupid. Like, really, really stupid. Praful craves freedom and buying power. And when she experiences it, she transforms.

Praful doesn’t really care what people, apart from her family members, think of her. She lives by her own rules and is short on social graces. Also, she laughs too much, too loudly, and she haggles.  In fact, in the first half of the film, Praful is too cheery. Almost floating four notches above what’s happening in the film, as if she’s intoxicated on some secret high jinks drug.

That Praful is Gujarati somewhat explains her fixated dedication to make paisa, kuch bhi kar ke. But that she pursues it with the urgency and chutzpah, if not scrupulous fussiness, of Ocean’s 11, remains inexplicable. For years men in movies have spiralled down, been in self-destruct mode, leading to epic heartaches and disappointments, while women have been held the reins as responsible caregivers.

And on the few occasions when women have dared to step out — to rebel against patriarchy, or just give in to their bodies or whims for a night — they have paid for it with their izzat in some form or another. Heavens above and the men below have wrecked havoc on them the dayafter. Here too there’s a cost. Only Praful doesn’t care. Worse, she’s enjoying what she does.

Sameer (Sohum Shah), the good, marriageable boy, who makes dharmic apps, goes. While Praful os smitten by the love that this simple, sweet man showers on her, she doesn’t really care. The only thing that’s important to Praful is Praful. Most filmy female pickpockets or frauds, especially when played by heroines, do bad things because either their brother is being held hostage by some evil man or some ailing parent awaits a life-saving operation.

To be aivain bad, for the fun of it is not for women. Definitely not leading, lady stars. In that, in the creation of a female character fashioned after wayward, wastrel men we’ve seen over and over, is interesting.  In everything else, Simran is a dud that’s badly written and badly directed. There’s no fluidity in the narrative and apart from Kangana, the only decent actor in the film was the bar guy. I believe his name is Timothy Ryan Hickernell.

I understand that there was some epic battle between Ranaut and Apurva Ansari, the national award winning screenwriter who wrote Aligarh and Shahid. He was miffed that Ranaut wanted writing credit, which he says was all his doing. Ranaut insisted on getting the credit.