The 3-D pops out at us in the famous opening credits, with the Terminator’s metallic skull face bursting through flames. 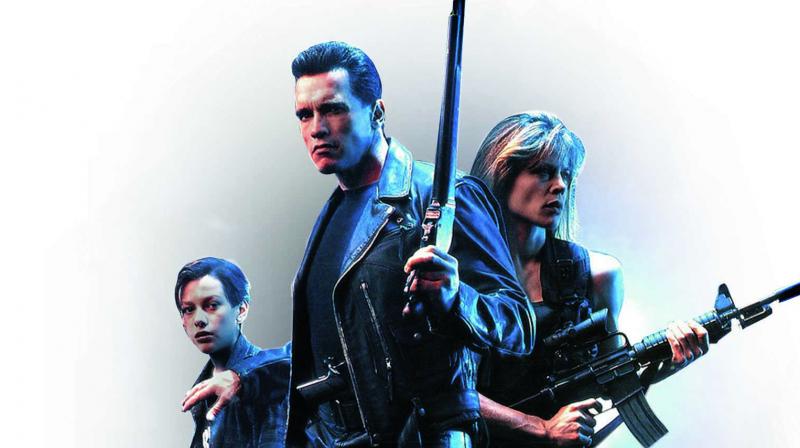 When we talk about sequels that equal or even better the originals, a handful of titles are invoked nearly every time: The Godfather: Part II, Aliens, Mad Max 2: The Road Warrior and Star Trek II: The Wrath of Khan.

And, of course, Terminator 2: Judgment Day, James Cameron’s 1991 follow-up to the 1984 time-travelling sci-fi actioner about a cyborg assassin sent back in time to take out one Sarah Connor — and the great soldier that spirals back from the future to protect Sarah and to play an even more pivotal role in the ultimate survival of humankind.

I loved the first Terminator, but I’d agree the sequel is a superior effort. The upgrades in Judgment Day are myriad: Technological advances in computer-generated imagery and other special effects allowed Cameron to come closer to fully realising his vision for the Terminator story.

There was a massive increase in the budget, allowing Cameron to pursue that vision. The original Terminator was made for about $6 million, while the sequel was priced out at more than 15 times that amount. You can see that money on the screen and in the star power of Arnold Schwarzenegger, who by that time was the No. 1 box-office star in the world.

Schwarzenegger, in effect, replaces Michael Biehn as the main male action hero. Linda Hamilton’s Sarah Connor transitions from plucky but overwhelmed regular gal to a lean, almost mean fighting machine — well, not a machine, of course, but a fiercely protective mother, hardcore survivalist and army of one.

The first Terminator had a nifty and at times wonderfully head-spinning plot, and it combined action movie pyrotechnics with Twilight Zone-type elements such as time travel and what happens when humans try to return to the past and alter things that have already occurred. But the sequel took those elements to the next level, with some of the most impressive chase scenes, hand-to-hand combat sequences and shootouts ever put on film, and a storyline with the brilliant masterstroke of turning the original, dreaded Terminator into a father figure/protagonist, and giving us a much more robotic, deadly, seemingly unstoppable killing machine as the villain.

Terminator 2: Judgment Day solidified Schwarzenegger’s standing as one of the most unlikely (and most popular) action movie heroes ever. Its massive success gave Cameron the juice to secure increasingly enormous budgets for ever-more ambitious projects, including Titanic and eventually the Avatar franchise. And Hamilton’s Sarah and Sigourney Weaver’s Ripley five years earlier in Aliens (directed by Cameron) were the prototype action heroines.

It’s nearly impossible to overstate the importance of Terminator 2: Judgment Day as a creative work and as an influential chapter in Hollywood history. But hey, it’s been available on various home video devices for decades now. If you’ve seen Judgment Day multiple times on your home big-screen, should you really go to the theatre and pay 2017 prices for the new 3-D version?
Absolutely.

This is no hastily cobbled-together, tacked-on 3-D re-release. In typical Cameron fashion, the conversion of Judgment Day to 3-D was a long, laborious and passionate endeavour, with Cameron overseeing a team of nearly 1,000 artists and technicians who spent six months adding the 3-D effects.

They cleaned up scratches, dirt and faded photo chemistry from the original negative, layered in certain colours and shades that weren’t quite right in the first place and made just a few minor fixes and adjustments, for example, during the truck chase sequence in the 1991 edition, a windshield is shattered, only to reappear intact in a subsequent shot. That continuity error has been rectified.

The 3-D pops out at us in the famous opening credits, with the Terminator’s metallic skull face bursting through flames. For the rest of the journey, it’s on a par with the 3-D in most current films of the genre: occasionally impressive, often little more than icing on the cake, at times almost forgotten.