Bobby Deol is bad and awkward in the beginning, and then not so bad. 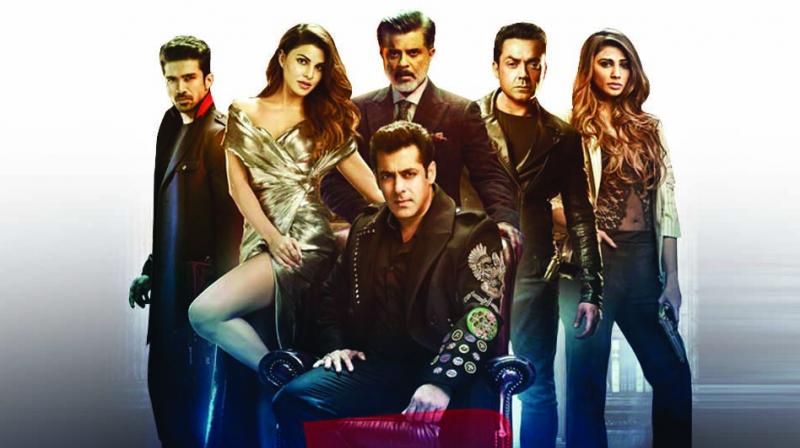 Race 3, by choreographer-turned-director Remo D’Souza, is a slow, dim-witted crawl to nowhere. Wherever the Salman Khan-starrer was planning to race to, it doesn’t get there despite the fact that it is so long that half-way through the film I could feel my waxed armpits starting to sprout hair.

Remo’s Race doesn’t have the kinetic energy that Abbas-Mustan’s itinerant first film in the series had.

That one was an entertaining,  suspenseful thriller. This one is like an extended trailer that suggests a story and actors who can act.

It misleads on both counts. Race 3 is a mash of lovingly recced and elaborately conceptualised and captured spaces where luxury sports cars, macho jeeps, SUVs, choppers, swanky buildings and stunning locales are given more screen time and precedence over the actors. Which is the way it had to be, I guess, because the cars exude more purpose and zeal than all the actors put together.

Race 3 opens loudly, with the whroom-whroom of some fuel guzzling vehicle.

This is followed by a white chopper flying over golden sand dunes to, eventually, regurgitate Shamsher (Anil Kapoor) onto his own little illegal arms factory where one Balwinder has staged a coup.

But Shams — let’s please get on informal terms with these guys because, if you do decide to watch this bore fest, you’ll be spending almost half a day with them — who leaves nothing to chance, plants a stick of gelatin in Ballu’s breast pocket.

I thought this gelatin business very odd, and wondered whether these bandook-selling goons will rush off to grab some aprons and start whisking stuff to make Rex jelly? But it seems Shams had planted the other kind of gelatin — the one than goes Boom! and leaves a bloody mess.

Soon after, we are introduced to all the characters by a voice-over that belongs to god knows who.

Shams, an illegal arms dealer who has emotional and business links that go back to Haldia in India, has an enemy. Rana Singh (Freddy Daruwala)  is powerful, evil and likes to snort stuff.

Shams also has grown-up twins — Sanjana (Daisy Shah) who likes extreme sports and is ambitious, and Suraj (Saqib Saleem) who is always angry and dense. Yash (Bobby Deol) is Shams’ “lethal” go-to-guy for all bumping-off assignments.

And then there’s his sautela beta Sikander (Salman Khan), who is “most powerful” in the scheme of things, but is never shown selling any arms or bullets. He’s more like the glue that binds this family.

Soon there’s some sort of assassination attempt on Shams. Though he shoots most of them down, often with both hands, including one man who instead of just getting felled by bullets gets ignited and is like a bouncing flame riding a motorbike, his silly twins rush off to Rana’s den to kill him.

This is a terrible idea, so Sikander, or Sikku, is summoned who, for some unexplained reason, is already in a wingsuit and perched on the edge of a skyscraper. Upon receiving orders, he flies off. Lolz.

The film’s plot hereafter is a mishmash of fallouts — of sibling jealousy and a back story about a brother who was killed and the younger brother wanting more than he got.

There’s also a dull segment about the girl Sikku fell in love with Jessica (Jaqueline Fernandez). First she goes lapata, then appears in another man’s clasp.

In between all this some old contact of Shams arrives from India asking for million of dollars in bearer bonds in exchange for footage of Indian politicians indulging in X-rated rangraliyan in a hotel in Manali.

There are some twists at the end, a la Abbas-Mustan, and the film does come alive when it sits down with Shams. But that’s approximately one minute out of this 160-minute long nonsense. And then, just as I was about to smile, Race 3 promises that there will be a Race 4.

If I wasn’t so exhausted, I would have shot all my cheesy popcorn at the screen with both my hands.

Race 3’s CV is impressive and designed to goad us to book tickets. The film required the services of three choreographers and about seven people to provide the film’s music — background score and songs. Eight lyricists were engaged, including Salman Khan, and two dialogue writers.

It also has two producers and the film has been shot in Mumbai, Kashmir, Leh-Ladakh, Jaisalmer, Thailand and Abu Dhabi.

Some of the action sequences have been choreographed by Tom Struthers, who worked on Inception, The Dark Knight and Dunkirk.

Apparently, it was on Salman Khan’s say-so that the project was handed to Remo D’Souza instead of Race brothers, Abbas-Mustan. That shouldn’t have been a problem because while Race the original (2008) was nice, Race 2 ran amok from Cyprus to Turkey to Italy trying to pass off John Abraham as the evil one despite the fact that the only expression on his face throughout the film was the serenity of a duffer.

Given that, Remo carries the baton well. There are many gizmos and all arrivals and departures of machines with engines are shot lovingly, in slo-mo.

As is every action — the high kicks, flips, flying men smashing into glass, the entry of a star, the exit of the star...

That’s because D’Souza’s direction is exceptionally inept. Laughably so.

He doesn’t have the ability to tell a story cinematically, so he needs someone to constantly provide a voice-over — to introduce characters, to tell what happened in the past. He even uses text every time he changes location, to tell us where he has taken us.

It’s like he took the story board session to be a master class in direction.

Forget having the ability to create drama, there isn’t a decent dialogue or scene. And he wastes the only two talents he has — Anil Kapoor and  Saqib Saleem.

Worse, he is unable to create even a single Sallu Magic Moment.

Given his expertise, it’s surprising that the film’s choreography is so-so, and the action scenes riddled with so many tacky glitches — Sanjana’s shoes change thrice in a fight scene, a cement divider splinters into cardboard, Salman’s extra is all too visible, and his photo shopped abs make him look abnormal.

Sallu Bhai is now like an old bachelor uncle who seems kinda fit but takes a while to get from one position, place to another.

Either on account of being unfit, or wearing very tight pants while a large band holds his stomach in, there’s no agility in his movements.

Like he speaks, that’s how he moves now. Thus, the strange dance steps and all action in slo-mo.

Bobby Deol is bad and awkward in the beginning, and then not so bad. He and Sallu have nice chemistry, and at the end both get to flaunt their manboobs in such close proximity to my face (even in 2D) that I got very shy.

Both the girls are flexible, can do a full split  and get to have a cat fight.

Daisy Shah is excellent  at dancing and action. Jaqueline Fernandez is lovely and makes-do with charm, mostly.