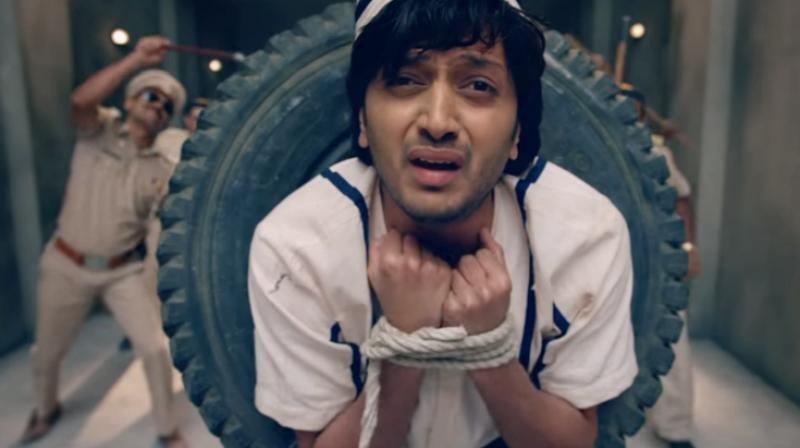 Bumpy, who marked his directorial debut with Luv Ka The End that featured Shraddha Kapoor is back with Bank Chor. The film deals with a robbery in a bank which becomes an epic fail after CBI enters to solve it.

Champak (Riteish Deshmukh), a silly robber along with his two disciples Genda (Vikram Thapa) and Gulaab (Bhuvan Thapa) enters a bank to rob it. Things become worse when CBI officer Amjad Khan (Vivek Anand Oberoi) comes to stop the robbery. Gayatri (Rhea Chakraborty), a television journalist who is stationed outside the bank to report helps Amjad to catch the three robbers. But to more surprise, their lives change when they discover that another robber Jugnu(Sahil Vaid) is also in the bank.

The primary shoot of the film took place in 2014 and the film was stuck for the longest time due to reasons best known to the production house. The plot of the film looks dated but the feel of it is fresh. All thanks to the fancy edit technologies. The screenplay of the film is engaging but the twists in the plot aren't convincing enough. The director went berserk in dealing with an average plot in a comic thriller genre. The first half of the film is filled with Delhi vs Mumbai jokes which are good too but the second half is a hardcore thriller. The makers of the film promoted it as a comedy film but the film has its own good surprises but loses the fun eventually.

YRF has produced several con films like Bunty Aur Babli, Badmaash Company, Bank Chor will remind you of all such films in bits and pieces. The film is layered towards the climax but it's too late to even realise it. The climax of the film is slightly reminiscent of Akshay Kumar's Special 26. Bumpy tried hard to evoke curiosity by introducing a political murder amidst to the bank robbery but still the film looks half cooked.

The scene where Champak and his disciples shower money on the poor people while they are watching Dhoom 3 is awful. The film is anything but a cheap comic thriller but slightly better than Bumpy's first film Luv Ka The End. Although he has evolved as a filmmaker, he still lacks in writing. No matter, this film has two big male actors as a selling point but the bad screenplay overshadows every single good point of the film.

The man who steals the show is undoubtedly Sahil Vaid who plays an aggressive robber. His portrayal may put other actors to shame. Riteish Deshmukh is repetitive in his comic timing but sails through in the entire film backed up by funny dialogues. Bhuvan Arora and Vikram Thapa are refreshing and convincing. Vivek Anand Oberoi looks good as a tough CBI officer. Rhea Chakraborty has nothing much to do in the film, even a non-actor would have pulled her role.

Overall, Bank Chor is highly average film with a boring comedy and an outdated thriller quotient but since there are no big releases this Friday, you can watch the film or instead watch Phullu, an untold story of a man who propagated the idea of sanitary napkins in his village.