War for the Planet of the Apes movie review: Every war has a justification

Once again, we visit the concentration camps, and it reminds us of how the Nazi’s justified the war followed by other armies. 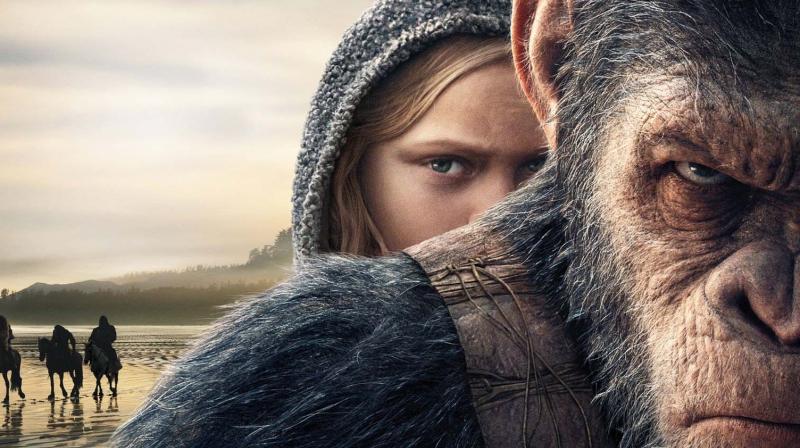 Ape-pocalypse is the text that you see inside one of the sewer lines that connects the prison area where the Apes are held captive towards the middle of the film. This is an important sewer line that has a special significance to how the movie proceeds from here. War for the Planet of the Apes is the latest in the series that has been running on and off from the late ’60s. The series that started off in an aftermath of a nuclear apocalypse seems to always loom closer to another apocalypse (for humans). This is not just any text; it is going to linger on in my memory for a long time and perhaps next time if I happen to see an ape, I am going to think about this very phrase.

Woody Harrelson, the colonel who is running what seems like a concentration camp of the Apes, is a wonderful actor, someone who you love to hate as an effect of his performance. We have seen him in similar characters in many of his other films too, in this one however, the character transforms into a pitiable situation towards the end, leaving you with the void that comes with not being able to see the end of the villain. Yes, humans are the villains here, or at least that is what the film makes you feel like.

I will take a moment here to acknowledge the brilliant medium that is cinema, malleable and ductile, sharp and brittle. Used properly, it almost always leads to the desired effect. It helps convince people and create agreement or dissent. With the increasing realism, thanks to the computer graphics and animation, it also convinces me that Apes can mount horses, learn and speak human languages, use weapons, prepare battle strategies and also show compassion. If it weren’t for cinema, we would have been an empty, disconnected civilisation perhaps.

The Planet of the Apes series has always had a lot of socio-political and ecological themes embedded in it. This one too is laden with similar burdens. For instance, the moment when Caesar kills the first human soldier as part of his revenge and immediately afterwards the Apes discover a young girl, the soldier’s daughter, the decision of being either ruthless or compassionate looms for a few moments. Similarly, when Caesar has to pull the final trigger and he realises the helplessness of the antagonist, in that intense moment the burden of ethics seems too huge to bear. There are also characters who have denounced their compassion and guilt. They have stopped responding to pain and suffering of other beings, and they have found justifications for every act they commit. These are dangerous, disgusting characters. Sadly they are all humans.

Once again, we visit the concentration camps, and it reminds us of how the Nazi’s justified the war followed by other armies. If you are so involved, you are immediately reminded of several other cinematic moments when protagonists or antagonists defined and justified war as the only way forward, the only way that humans could survive if not collectively then as a race or culture. In that justified act of war all other acts are automatically justified: slavery, torture, violation, murder, immolation, sacrifice, etc.

I would however wish to see if the series or one of the films is actually made by an ape. What would that bring to the narrative, would they be as compassionate or more ruthless? Will their primitive instincts reveal something more surreal and enlightening about us, about how we see and perceive things?

While War for the Planet of the Apes is about the fight between humans and apes, you soon realise that there are more sides to the war. Towards the end, a very interesting sequence occurs where each party also seems to be the spectator of the war, and each celebration of victory is immediately overrun by another invasion, another surrender and each being grander and more overwhelming than the previous one — each having its own justification that simply cannot be dismissed.

Tags: matt reeves, andy serkis, war for the planet of the apes