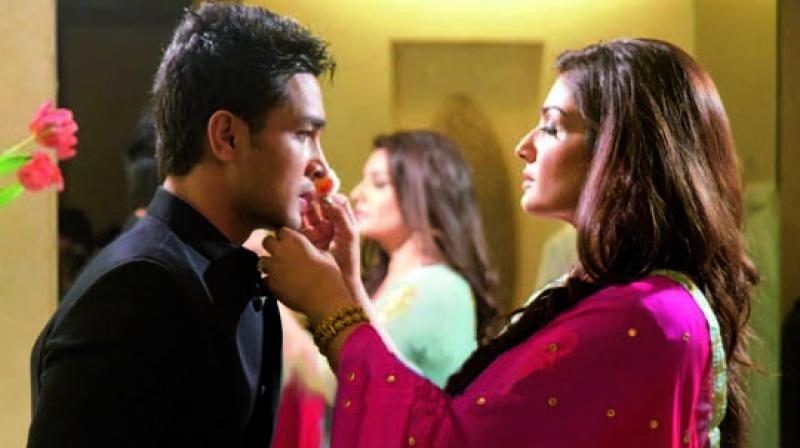 At times I have wondered and now it is confirmed — film-making is nothing like cycling.

While even average humans don’t forget how to ride a bicycle, ace directors can rather quickly forget the art and craft of film-making. Like Ram Gopal Varma, and now Onir.

I’m not sure whyfor it happens, but I guess if one is not careful, all memory of how to make a film can get wiped out, rendering a mind once full of interesting ideas, visuals and tricks completely blank and desolate.

This is the only plausible explanation I can come up for writer-director Onir’s Shab (meaning, night), the same man who made the fabulously risky and audacious I Am in 2011, and won a national award for it.

Shab, set in NCR, boasts of several writing credits — there’s Merle Kroger, Onir himself, Adhiraj Singh, Urmi Javekar, who is thanked duly for the story idea, and the NFDC script lab. And yet it’s an insanely ragtag, shabby story crammed with cliché characters and situations.

It is also blah. Sajid Khan’s films are also rubbish. But they belong to a different category of blah. Khan’s films are so moronic and offensive and such a colossal waste of the nation’s time and resources that they get your goat, energising and rousing you to throw stuff at the screen and him.

Onir’s Shab sits on the other hand. It is so self-conscious about the fact that it has gay characters and some male-on-male action that it lives in its own bubble of liberal, pious air. It is smug in the belief that we owe it a reverential viewing because it has subplots involving gay characters.

That’s not possible when all its gay characters have as much depth as a stock, campy toy, almost as if they all came together in a supersaver pack from Hamleys, labelled “Our Gay, Angsty World”.

It’s sad that this idiot view is not, and never has been, the exclusive domain of straight men and women. Stupidity transcends sexuality, gender.

Shab, for some strange reason, is split into four seasons, and trapped in these are stories we’ve seen before, but in better frames.

It begins in summer. A model hunt is on and glamorous Sonal Modi (Raveena Tandon) — surrounded by a pack of gay designers who are either lusting or lurking in a lurid sort of way — is asking strapping men, including Mohan Rawat (Ashish Bisht), serious questions that are always asked at beauty pageants.

Simple, desperate Mohan, who has just arrived in Delhi from Garhwal, stands cute in silver lycra chuddies, but doesn’t understand the questions. Nonetheless, his pert bottom catches the cinematographer’s eye and interest more than once.

Later, at the bar, when Mohan musters the courage to ask Sonal “ma’am” why the judges didn’t like him, she doesn’t answer, but leaves her red visiting card on the table.

This is the film’s main, and best track, thanks entirely to Raveena Tandon.

Shab meanders to Raina (Arpita Chatterjee) and her sister Anupama, then to her friend and employer Neil of Neil’s Cafe, and her French neighbour, Benoit (Simon Frenay).

They all have issues that interest the film a great deal. There’s Neil’s lover who keeps abandoning him for forays into a hetero life; Raina keeps applying mehndi and packing her bags at nights before disappearing; and Benoit keeps reading Facebook posts about a boy who killed himself.

There is no chemistry between any of these characters. They all inhale deeply and heavily and exhale long and slow at the sight of the other. And when they speak to each other, their dialogue is laboured.

Over several turgid, boring scenes spread across monsoon and autumn, Mohan becomes Afzar, Raina we discover is also Afiya, and Neil’s boyfriend is getting married, which makes Neil more morose than he usually is.

In between all this, a shirt that Afzar bought becomes a thing, a metaphor, a reminder that he’s not cool, that he’s small-town tacky.

It’s all too meaningless and witless for anyone to care. Only when Afzar’s small-town comments about Big City gays are treated with gaping, liberal disgust, did this otherwise dead, dreary film illicit some weak giggles.

By winter, the point of seasons is completely forgotten except for a muffler or two, and the film takes what it thinks is a moral flight, but is, in cinema-speak, a suicidal plunge.

Strangely, several scenes in Shab carry the stench of Madhur Bhandarkar — claustrophobic seediness that’s his signature — without the ambiguity about sexuality that one would have expected from Onir. Apart from Neil’s boyfriend’s fluid movements in and out of gay and hetero relationships, everyone is steadfast in their sexual preferences.

What we get a lot of are scenes that are terribly constructed and stiff, stilted acting.

Raveena is the only exciting actor in Shab. She takes full control of her character and, often, the film, and seemed to be enjoying it.

When Shab moves away from her, it starts to atrophy. There’s a certain kind of insincere acting that city-bred intelligent, cool, liberated characters are often found doing in inept films. Mostly because there’s not much to their characters, and the actor’s skills. So deep thoughts and disenchantment with life are simulated by capturing them in close-ups, usually with their eyelids down, or eyes blank.

It’s quite hideous, and it’s not acting. It’s tacky fakery and we can tell.

Arpita Chatterjee and Areesz Ganddi’s deep sighs and vacant looks make Shab feel longer than it is. Over the course of the film I actually felt some of my brain cells die of boredom.