It takes special set of skills and daring to pull off a West-inspired musical in a land that has its own signature musicals. 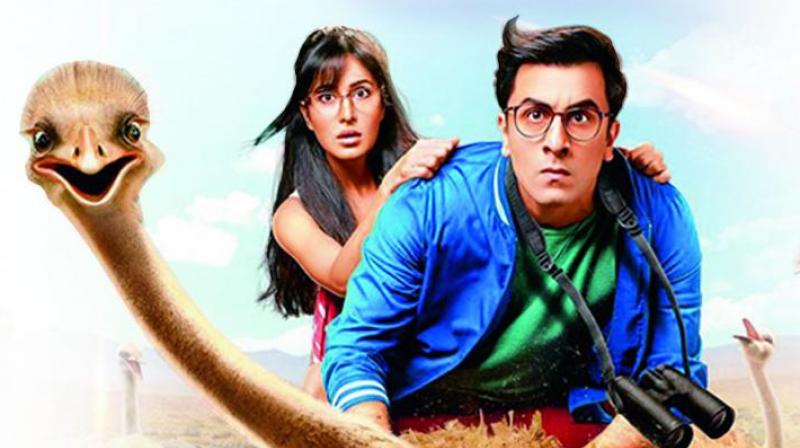 Im hardly ever iffy about films. Mostly I’m cocksure. I’m steadfast in my view, for example, that Baahubali 2 is a crappy film, whatever the box-office may scream. Similarly, I know for sure that A Death In The Gunj is an excellent film, whatever its commercial prospects.

But Anurag Basu’s Jagga Jasoos threw me off, and I’m not sure. Just like his Barfi! did, in 2012.

I was blown away by how technically suave and visually stunning Jagga Jasoos is, but I also dozed off at least twice because its we’ll-only-sing-not-speak was getting very pakau.

JJ is a tall order. It’s no mean feat to pull off a musical with a Tintin-esque character and scale.

I tip my hat to him for flexing his muscles and shattering a boundary, but Jagga Jasoos also goes on and on... often needlessly. And I’m not a big fan of those La La Land type of musicals.

Hence, the copout rating. Like its protagonist, Jagga Jasoos takes off to a has a stuttering start.

Little Jagga is abandoned at a hospital and that’s where he grows up, stammering and a bit lost.

But then he rescues a man and nurses him back to health. The man, in turn, adopts him and takes him home.

Jagga calls him Tutti-Futti because he’s bumbling and clumsy, but also because Prof. Bagchi (Saswata Chatterjee) is on a dangerous mission which has lots to do with the 1995 Purulia Arms Drop (1995) and Bashir Alexander, the two-headed ringmaster of all baddies.

Tutti-Futti gives Jagga Tintin’s haircut and a nose for intrigue before leaving him at a hostel. Thereafter, Jagga receives one VHS tape a year, full of parental love and advice.

He’s sad, but he keeps busy. Every time he sees a question, smells a murder, off he goes to find answers.

Two rather nicely done murder mysteries later, which he solves riding a strange contraption, and with Shruti (Katrina Kaif) in tow, he proceeds to look for Tutti-Futti.

Like Tutti-Futti, Shruit is also a bad-luck magnet — actually, they are just similarly inept, forgetful, clumsy and cute.

Jagga Jasoos picks up pace and acquires daffy energy once the chase begins with Sinha (Saurabh Shukla) on their tail and a bumbling accident-prone Shruti and stammering Jagga trying to dodge bullets and baddies.

They whiz through a beauteous land called Mombasa… This bit is stunning, with giraffes and zebras in a land burnt dry and golden by the sun.

Jagga Jasoos is a musical not just because Disney produced it. There's a cute, silly reason for it at the start itself, one that gives it a fairytale feel.

When focused and on course to solving a mystery, Jagga Jasoos is fun and exciting. But when it meanders, or breaks into yet another song-and-dance,  it gets slow and bumpy. And soporific.

Though Jagga’s knack for cracking mysteries is conveyed through several small murder mysteries before launching him into the itinerant chase across foreign countries, his characters doesn’t have much depth. It’s to Ranbir’s credit that out of the scarce material he was given, he creates a character who seems to have warm fuzzy core.

Jagga Jasoos’ story, screenplay and direction are by Anurag Basu, and he has kept the film’s most thrilling, tantalising bit for the end, in the hope, perhaps, that it will beget a sequel.

The two-headed villain we don’t see throughout the film makes a two-second appearance at the end, and in an instant the film grows up, and acquires meacing depth. But only to abandon us all excited and desperately wanting.

Jagga Jasoos’ best bits are when it hurtles through alleys and trains trying to solve its main mystery.  This is where it acquires a thrilling adventure spirit, primarily because its screenplay is luxuriant and soaring in imagination and canvas.

Jagga Jasoos has apparently been in the making for three years, at the mercy of the personal affairs of its lead pair.

Der aaye durust aaye, I say. It’s admirable that Basu, very talented and bright, stuck to his idea and vision through all this, and that fact that this film marks an impressive journey — from Murder (2004) to Life in a Metro (2007), Barfi! (2012). Kites (2010) notwithstanding, it’s been quite a trip.

It takes special set of skills and daring to pull off a West-inspired musical in a land that has its own signature musicals.

Jagga Jasoos marks a milestone in his career — a film that required him ti step out of his comfort zone and devote himself to something completely new and challenging. I just wish he had kept it tighter, pacier.

Though cute and funny, it also requires a patient viewing.