Mysshkin though at times goes slightly overboard, has given an imposing performance. 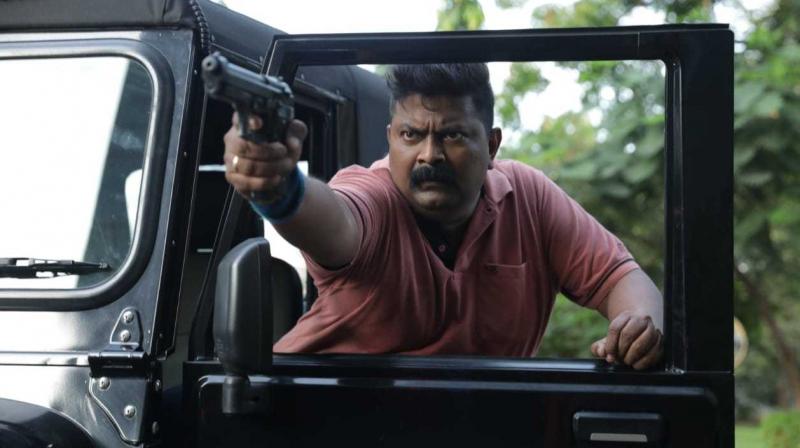 Ramprakash Rayappa who made an impressive debut in Tamizhukku Enn Ondrai Azhutthavum that featured a terrorism backdrop, now returns after a hiatus with an absorbing thriller Suttu Pidikka Utharavu, which too takes up similar theme but in a different premise.

Set in Coimbatore, the movie opens with a high-octane bank heist where Ashok (Vikranth), Selva (Suseenthiran) and two more loot a big sum of money and they are on the run. Commissioner Ibrahim (Mysshkin) along with his police force swiftly get into action and chases the criminals. Though one of them is shot down, the remaining trio including Ashok and Selva escape and hide in a crowded area. Ashok is in need of money for the surgery of his little daughter (Baby Manasvi). A shoot at sight order has been given.

In a parallel episode, we see a group of terrorists who operate from a house in the same colony and plan and execute a bomb attack at a shopping mall. Meanwhile, a few television media guys who incidentally had come to the place for coverage are stuck as the police cordon off the area. However, they quickly hatch a plan and with the help of the local girl Bhuvana (Athulya), they start a live coverage of the criminal chase down. Whether Ibrahim nabs the offenders or not forms the rest of the racy thriller.

Mysshkin though at times goes slightly overboard, has given an imposing performance. Vikranth does what’s expected of him. Suseenthiran is just about adequate. Athulya and her scenes involving the media look implausible and Ruthru’s comedy inside the terrorists’ house falls flat. Though Ram Prakash has narrated the proceedings in a tight paced manner and has not resorted to any commercial compromise, the writing is average and hence the film doesn’t engage the audience throughout. Logic goes for a toss at some places. The final reveal is interesting, but is a bit rushed.