On the whole, the innovative and intelligent thriller is worth a watch. 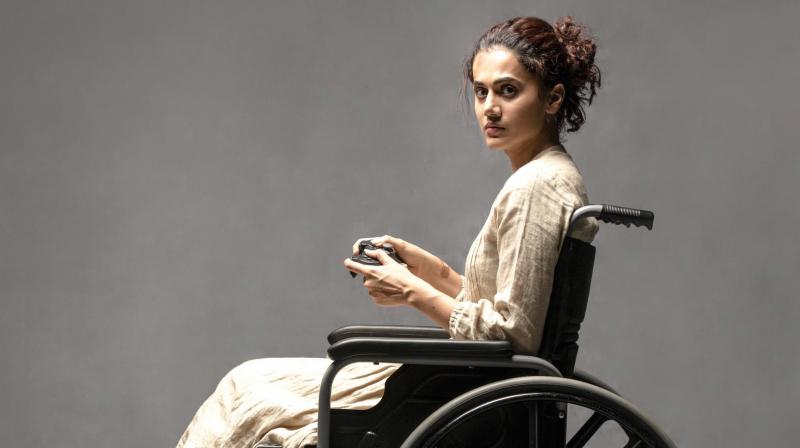 Game Over, directed by Ashwin Saravanan of Maya fame, is a psychological horror film that tries to weave you in by bringing out terrifying yet subtle character traits of the human psyche.

Swapna (Taapsee Pannu) is a single woman and a game designer. She is nyctophobic, and suffers from posttraumatic stress more so known as 'anniversary reaction', a condition, which triggers unsettling feelings around the anniversary of a traumatic event. For Swapna, it is a horrific incident that took place on a New Year eve. Because of this, she leads a secluded life with Kala Amma (Vinodhini), a housemaid who stays with her. Her only solace is her love for gaming.  Swapna’s life changes upside down the moment she gets a tattoo done on her hand which has a stranger girl’s ash mixed in the ink. She begins to have some bizarre dreams.

Meanwhile, a few psychos are roaming the streets, and these guys just love torturing others in their own twisted methodologies. They love watching people suffer, plead, and try to run knowing fully that their victims are going to be murdered. What more, their targets are single women, and they gain pleasure in the process of murdering and burning their subjects while capturing it all on camera. And now Swapna becomes the target of the serial killers. Trouble and horror are on their way to her house, and she would have to confront them soon. Will a wheelchair bound Swapna fight her inner demons and external problems and come out successfully?

The entire film revolves around Taapsee and Vinodhini. A complex character, Taapsee pulls it off with effortless ease and conviction. She shines every bit be it her panic expressions or showcasing her helplessness, all the same going full force and fighting fiercely with the perpetrators. With minimal dialogues, her lip-sync is also good. Vinodhni has given her best.

The pornography and insanity of it all is meant to instill a visceral horror in us, and there have been many films before that has explored this territory. But, Ashwin’s writing has lot of layers, a psychological thriller, paranormal feel and murder mystery, which helps the script to stand out! The concept is novel, thanks to his cowriter Kavya Ramkumar. And there’s certain fluidity between the horror and the thrill.

However, Taapsee constantly dreams. So at times it is confusing whether what we see is real or a dream sequence. There are way too many disconnected scenes that relive any build-up of tension and paranoia. The entire first half is too slow and the real action starts only post interval.

Ron Ethan Yohan’s background score takes the film to another level and instills the fear factor throughout the proceedings. The eerie sound effects add to the shrill ambience. Cinematographer Vasanth’s dark visuals create the right mood of a thrilling video game. On the whole, the innovative and intelligent thriller is worth a watch.