Race 3 movie review: Cars, guns, pretty legs but where is the plot?

The third installment of the action thriller franchise directed by Remo D’Souza is avoidable and is strictly for Salman Khan fans! 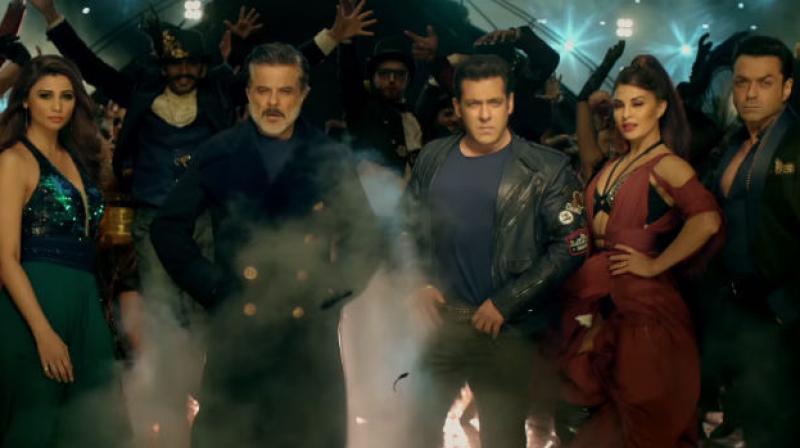 Race 3 begins with the most cliched introduction of seven masterminds, which is a trademark of the franchise. Speeding cars, slow motion action, an occasion to celebrate in every ten minutes, the film has everything glossy barring the story. Perhaps, it is the worst of the Race franchise too. It lacks the feel of Abbas-Mustan’s twists and turns.

Shamsher Singh (Anil Kapoor) runs his empire and lives a king size life in Al-Shafa. He deals in supplying illegal arms and drugs. Half of his property belongs to his twin children Suraj (Saqib Saleem) and Sanjana (Daisy Shah). Rest half belongs to his stepson Sikandar (Salman Khan). Yash (Bobby Deol) is Sikandar’s right-hand man. Rana (Freddy Daruwala) is Shamsher’s biggest rival in the business. Jessica (Jacqueline Fernandez) is a con but is in love with Sikandar. What’s next? Literally nothing!

The whole family does high octane action, are always up for firing, drink neat alcohol almost in every frame and are always surrounded by military armed forces, unbelievable! The narrator of the story also takes you to the flashback set in Handia, which almost make you believe that Race 3 is a Bhojpuri thriller. With the runtime of 159 minutes, you will either look for a loo break or feel hunger pangs because this yawn fest is illogical and barely lets you breath.

What about the music? The songs are pushy and add more drama to this melodrama. Dialogues are laughable especially the few given to Daisy Shah. “Our business is our business, it is none of your business”, “isko dil se nahin, dell se dikhao” hahaha... From scene one, Salman, the protector of the family, has a game plan to unite the family and reveal the real culprit. Race 3 can easily be termed as ‘Prem Ratan Dhan Payo’ in action.

Over to the captain of the ship, Remo D’souza. The director, who earlier helmed the dance franchise ABCD and A Flying Jatt, has surely made a visually appealing film but nothing more to it. Flying cars while chasing beside the desert is definitely impressive but why it is happening is the big question. He keeps the thrilling element very predictable, be it a spy cam in a pen or a robbery planned in a world class bank in Cambodia. Nothing in the film is close to the reality.

Salman Khan has put on weight and he smartly wears black most of the time. With his tight close-ups, sweaty abs, bulging muscles, grand entries, the film has all the tactics to woo his fans, but certainly it is his worst act till date. Tubelight and Jai Ho were far better than this one. His dance moves and dialogue delivery doesn’t need any notice further. Saqib Saleem and Daisy Shah’s ‘bro’ act is annoying. Apart from sipping red wine from fancy glasses, they have nothing more to do. Jacqueline has less screen time, but her legs speak volumes. She is in the film to dance and make the film look good. Bobby Deol is good, Freddy Daruwala is just a prop. Anil Kapoor does draw some attention amongst this bunch of awful actors.