Ranchi Diaries movie review: Will leave you scratching your head

Enter the theatres at your own risk for this film or else skip this weekend and wait for Diwali releases rather. 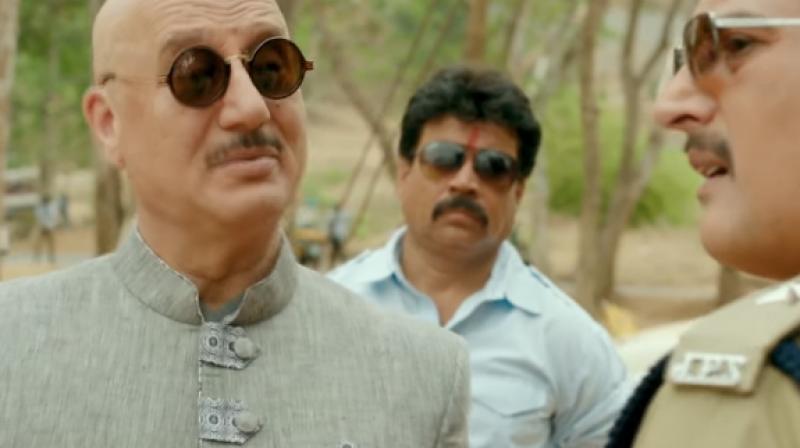 A still from 'Ranchi Diaries.'

Dark humour and political behaviour in a Naxal-prone area, Sattwik Mohanty's directorial debut Ranchi Diaries could have been a well-designed film with every possible ingredient of a comic thriller, but it turns out to be a nightmare. Amidst the most clichéd events in the film, Ranchi Diaries is an alert for a yawn fest.

Pinku (Taaha Shah), a flamboyant godfather of his self-proclaimed gang, runs a small food stall. His close friend Monu (Himansh Kohli) aspires to leave the city for his dream job one day and is madly in love with Gudiya (Soundarya Sharma), while she dreams to become a singing sensation.

Thakur Bhaiya (Anupam Kher), a corrupt politician secretly admires Gudiya. Meanwhile, Pinku, Monu and Gudiya plan to rob a local bank, but their lives go for a toss when a Naxal bossman kidnaps the three inside the bank. A sincere cop (Jimmy Sheirgill) enters to investigate the case and unravel the original robber.

Sattwik Monanty is a subtle writer, but has a very distorted vision. The film, which was touted to be a comic thriller, will leave you scratching your head. Though the film has a few comic punches and fillers which are a breath of fresh air, the moment you realise they exist, they seem to vanish off. Sattwik tells a small-town tale of a silly robbery in a most boring way. There is no head and tail to the entire film.

The songs and the styling of the lead cast are a major misfit. They sound and look too urban for a city like Ranchi. No matter, Sattwik has saved the film by maintaining the Bihari dialect throughout, but still the film misses out on the entertainment factor. There are high chances of you leaving the theatre way before the film even hits the climax.

Himansh Kohli, who marked his acting debut with Yaariyan, should surely think of an alternate career. From his dialect to mannerisms, he looks disconnected as Monu. Soundarya Sharma looks too glamorous for her role as wannabe fashion queen Gudiya. The funniest thing is the way she slips in and out of the role when a song comes. Taaha Shah looks better than the other two for sure. He looks a little more convincing as a localite. Anupam Kher is completely wasted in the film. Seems he got too busy in handling the production of the film.

Jimmy Sheirgill, who plays a sincere cop, is a treat to watch in this sinking ship. He is raw and funny as a helpless and honest policeman. Satish Kaushik just goes off in a blink of an eye.

Overall, Ranchi Diaries is a supreme case of nervous breakdown or maybe psychological disorder. Enter the theatres at your own risk or else skip this weekend and wait for Diwali releases rather. Stay healthy and avoid Ranchi Diaries!